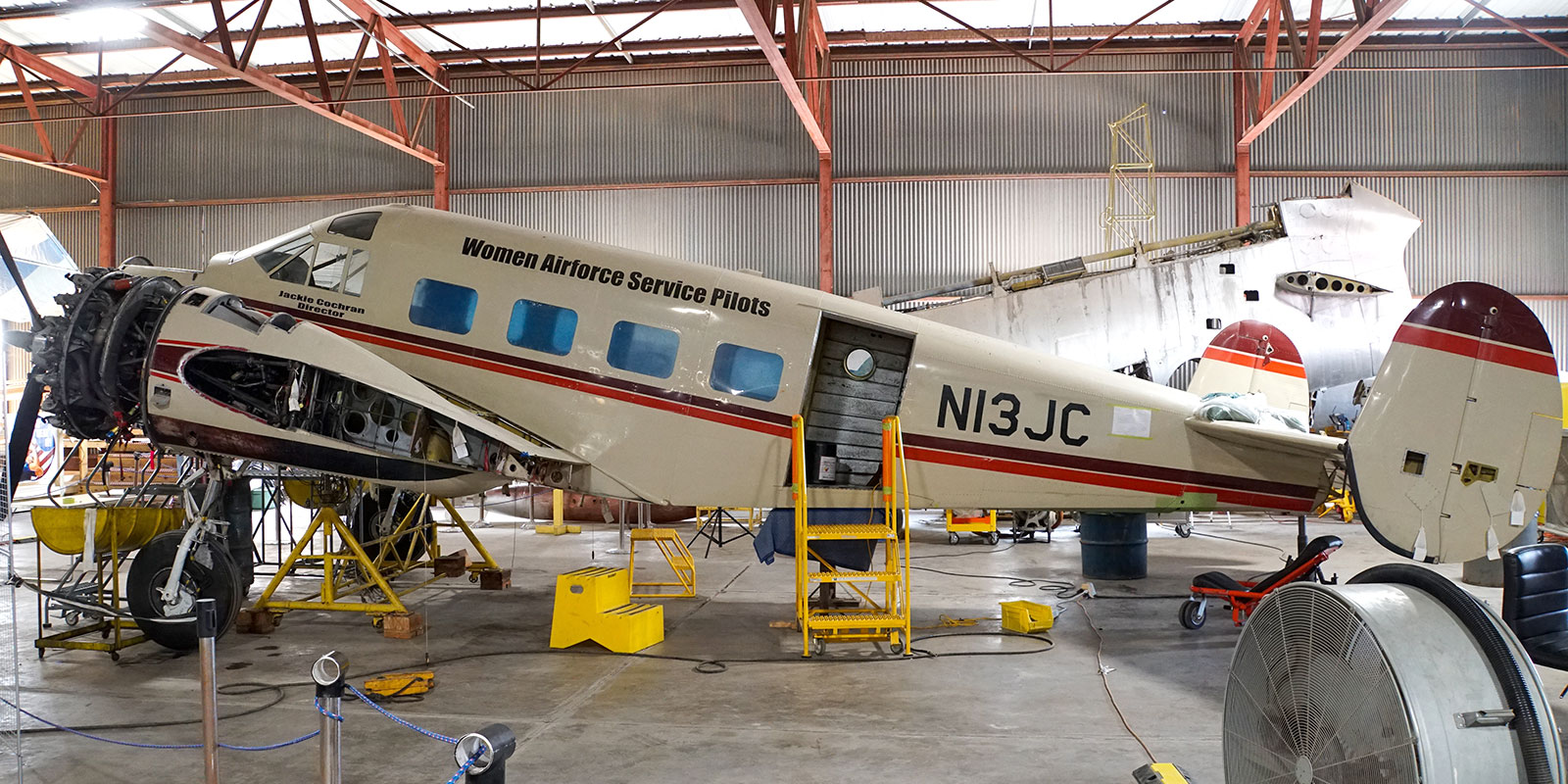 Falling in love is a wild adventure. Connecting with another person feels like flying, filled with excitement and wonder and butterflies in your stomach. That’s why a wedding I attended at the Frontiers of Flight Museum in Dallas felt so fitting. The bride and groom walked down the aisle with airplanes suspended above, and they exchanged vows inside the hangar. Later, the happy couple took pictures in front of the Chance-Vought RF-8G Crusader and other aircraft, then roamed the displays while enjoying champagne and cake. Surrounded by all those beautiful airplanes, your heart can’t help but soar!

Romance and inspiration are in the air at the amazing flight museums in Texas. Take a step back through aviation history, admire beautiful planes, and take a ride in a historical warbird! Check out some of the coolest aviation museums ahead.

Located at 6911 Lemmon Avenue in Dallas (near Love Field Airport), the Frontiers of Flight Museum has more than 40 air and space vehicles, 20 galleries and displays, and over 35,000 historical artifacts.

The aircraft gallery showcases planes from the Wright Brothers era to modern jets, many of which are rare or unique replicas. The collection includes early biplanes, historically important military and general aviation aircraft, the World War II Gallery, the unique history of Southwest Airlines, numerous commercial airline artifacts, and more. Planes on display include the McDonnell Douglas (Boeing) F/A-18C Hornet, an attack aircraft with the Blue Angels; the Texas Temple Sportsman, a single-seat high-wing monoplane flown in 1927; and the Chance Vought V-173 Flying Pancake, a one-of-a-kind bird that dates back to WWII.

There is also spacecraft at Frontiers of Flight, including the Apollo 7 Command Module, a replica of Sputnik 1, a Scaled Composites

SpaceShipOne replica and more. The two-story, 100,000 square-foot facility also displays missiles, flight trainers, powerplants, galleries, hot air balloons, and a model of Leonardo da Vinci’s parachute among other things. The museum also hosts many events, educational opportunities, field trips, summer camps, and of course, private weddings. It’s open from 10 a.m.-5 p.m. Monday-Saturday and from 1-5 p.m. Sunday. Tickets are $10 for adults, $8 for seniors, $7 for kids, and free for children under 3. flightmuseum.com.

If you’ve ever been to Addison Kaboomtown, held annually on July 3, then you’ve probably seen some of the historic warbirds from the Cavanaugh Flight Museum’s collection soar through the sky! The museum is located inside Addison Airport at 4572 Claire Chennault. It is a nonprofit educational organization devoted to promoting aviation studies and perpetuating America’s aviation heritage. The museum restores, operates, maintains, and displays historically significant vintage aircraft, as well as materials related to the history of aviation.

Cavanaugh Flight Museum has one of the finest aircraft collections in the area, from WWI, WWII, the Korean War, the Vietnam War, and general civilian aircraft. Top birds from each collection include the Sopwith Camel, a state-of-the-art fighter that shot down 1,294 enemy aircraft during WWI; the North American B-25HJ Mitchell, one of the best American weapons of WWII that was flexible and an accurate medium bomber; the Bell Helicopter OH-13D, which served in the US Army as a trainer helicopter at Fort Gordon Georgia; the Republic F-105F Thunderchief, a type of plane that flew more missions than any other American aircraft in Southeast Asia; and the Pitts Special, a fully aerobatic plane that has been the aircraft of choice for top ranked aerobatic pilots globally.

If you want to experience the thrill of history firsthand, you can even schedule a flight experience over North Dallas in one of several warbird aircraft. You can also check out the museum’s armor and vehicles or catch one of its airshows. Hours are 10 a.m.-4 p.m. Friday-Sunday. Tickets are $12 for adults, $8 for seniors and military, $6 for children, and free for children 3 and under. cavflight.org.

The Vintage Flying Museum boasts passionate people working on interesting aircraft. This nonprofit museum is dedicated to preserve America’s flying heritage in word, deed, and action. Go on an educational tour that covers aviation history and admire their extensive artifacts and memorabilia collection from WWI, WWII, the Korean War, and the Vietnam War. You can also watch volunteers as they restore and maintain vintage aircraft and visit the dedicated reciprocal and jet engine room, the FAA Aviation Education Resource Center, a unique aircraft model exhibit, and the rare and historic aircraft on display.

Some of their aircraft include the Beechcraft Model E18S-9700 Twin Beech, which was the last plane owned by famed aviatrix Jackie Cochran, who became the first woman to fly in the Bendix Trophy Race in 1935 (winning in 1938), the first woman to make a blind instrument landing in 1937, the first woman to fly  a bomber across the Atlantic Ocean during WWII leading to the formation of the Women’s Air Force Service Pilots, and the first woman to exceed the speed of sound among other accomplishments. Others include the Stinson L-5 Sentinel, Boeing B-29 Superfortress, Douglas C-47 Skytrain and more. The museum also offers aviation summer camps, Take Flight Days, and more.

Vintage Flying Museum is located at 505 Northwest 38th Street, Hangar 33 South, in Fort Worth, at the southeast end of Meacham Field at Fort Worth Meacham International Airport. It’s open from 10 a.m.-5 p.m. Friday, 9 am.-5 p.m. Saturday, noon-5 p.m. Sunday and by appointment Monday-Thursday. Tickets are $10 for adults, $8 for teens and seniors, $5 for children, and free for children under 6. vintageflyingmuseum.org.

Finally, check out the Fort Worth Aviation Museum, located at 3300 Ross Avenue in Fort Worth. This museum is home to “the most touchable warbirds in Texas” and is focused on using the magic of flight to inspire the next generation. This nonprofit museum has 28 warbirds and shares a home with the OV-10 Bronco Association, and the Forward Air Controllers and B-36 Peacemaker museums. Through its exhibits and memorabilia, it shows the economic and cultural impact of aviation on North Texas since 1911.

The Fort Worth Aviation Museum’s collection includes an F-14 D Tomcat, a widely recognized Navy fighter (this is the type of plane in “Top Gun”), which served as advanced interceptor and air superiority fighter. And the O-1 Bird Dog (also known as the Cessna L-19), which flew over 4,000 hours on the National Guard and is the only aircraft that has flown to the museum on its own power. You can also see the TF-102 Delta Dagger, flown by former President George W. Bush twice during his service with the Texas Air National Guard and known for being the first type of aircraft in the world to hold a supersonic all-weather jet interceptor. The museum is open on Saturdays from 9 a.m.-2 p.m. Tickets are $15 for a family of six, $7 for adults, $2 for youths, $5 for veterans and seniors, and free for kids 6 and under and active-duty military and family. fortworthaviationmuseum.com.

In his book, “The Spirit of St. Louis,” famed American aviator Charles Lindbergh wrote, “Science, freedom, beauty, adventure: what more could you ask of life? Aviation combined all the elements I loved.” This month, embrace the freedom of the sky at one of these amazing flight museums — it’s pure bliss. 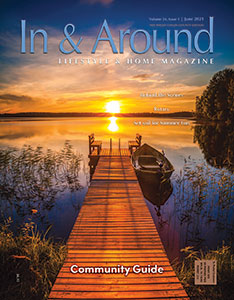