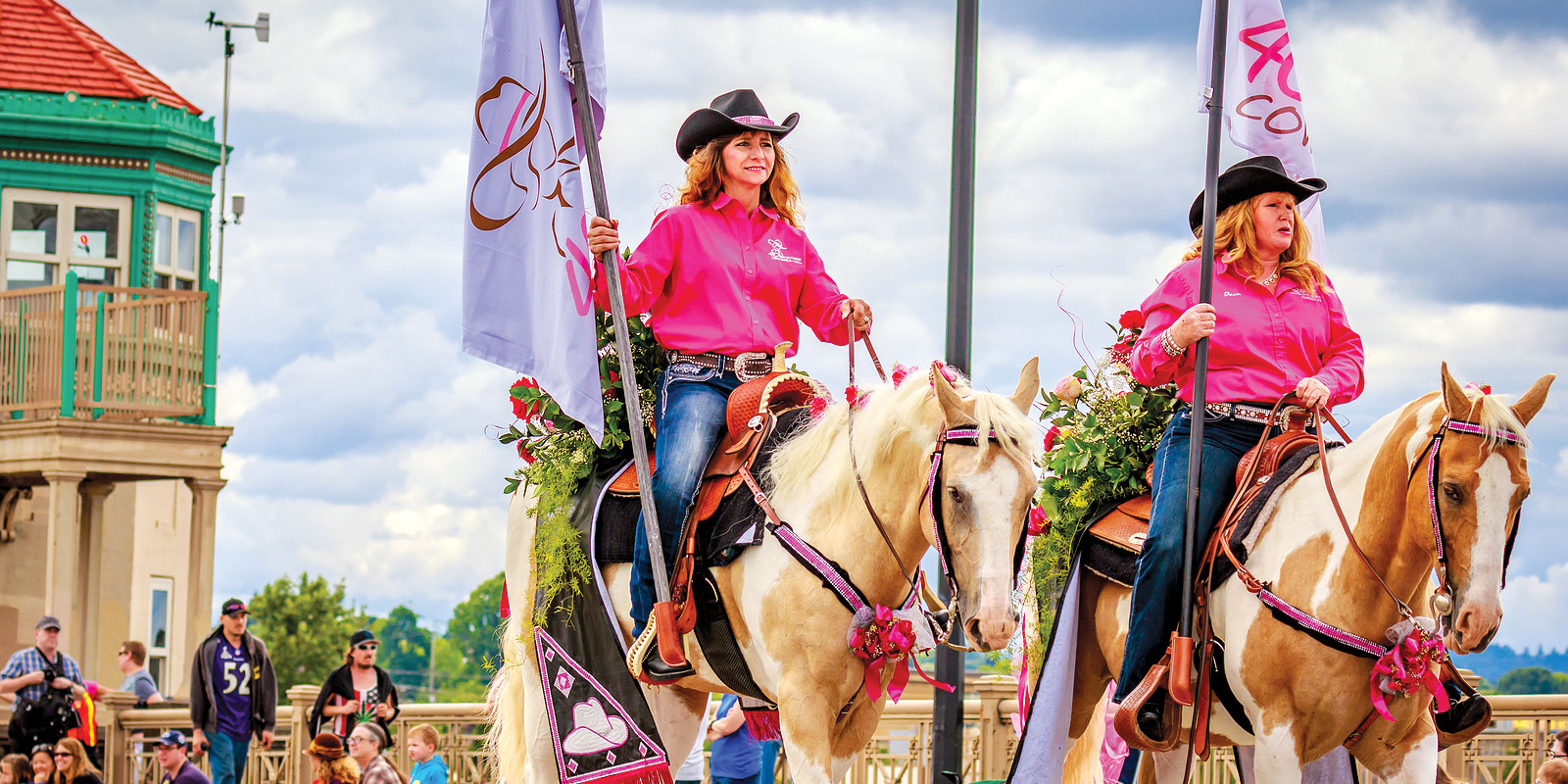 A love of horses and a community of seasoned “40-something women” who may, or may not, want to get back in the saddle again are participating in unique cowgirl groups in Texas and across the U.S.

In Farmersville, Wylie, Decatur and 13 other Texas cities — and across the country — 40 Something Cowgirl chapters have formed so women past a certain age with fun-loving spirits can go on adventures together while enjoying the company of the horses they love.

Kristi Williams was 46 years old when she started the 40SC group from her daughter’s bedroom in Oregon. Today, the headquarters for the cowgirl operation is located in a 3-story building in downtown Breckenridge, Texas.

The birth of the 40SC group wasn’t something the founder spent decades pondering, she said, it simply evolved in an organic way. After years of hoofing it in the horse industry with her husband Ted, the couple became highly aware of the fact that all of their clients shopping for horses were mature women.

“They didn’t have anything to do and they typically had two to three (horses) in a pasture,” she said. “We realized they were looking for other women to do stuff with so, we started putting people together.”

Kristi said as they started thinking about it, she wondered, “Why can’t we do this globally?”

Women of a certain age everywhere are looking to get together with other women, she said. “And when you look at the demographics in the horse industry, around 92-95% of the industry do nothing. They just have horses in their backyard and just a small few actually show or rodeo or haul.”

Kristi didn’t waste any time after the epiphany. “At this point I had already developed a product and written a handbook,” she said. “I was trying to fill that hole in my heart that was left after my daughter moved back to Texas.”

The 40SC movement was launched completely on Facebook, says Kristi. “That platform really provided us the opportunity to get the word out in an affordable way.”

The first 40SC chapter started in Albany, Oregon in 2010 and quickly went from 13 to 70 members within a 2-month period.

“We knew there was great potential,” Kristi said. “Within seven months they had already split off and started another chapter.”

Soon calls were coming in from Georgia and California, and Kristi says they kept moving along.

The majority of 40SC members joining were horse women who either had horses at one time and didn’t any more, or just got their first horse at the age of 60.

40SC has multiple chapters in over 20 states, and Australia, and they have several that are pending. Members come and go, says Kristi. Chapters have started, and chapters have failed, “But we just keep moving forward reaching as many women as we can to try and create opportunities for them.”

The women are not only getting together, they’re mentoring each other and creating lifelong friendships, she said. “Now, we go on two cruises a year with our membership. It’s just fun. People that you don’t think would probably have ever crossed your paths — even me, I would have never met all the women I know now because of the organization.”

To start a chapter — which only takes five women — interested cowgirls can contact the main office in Breckenridge and speak to either Kristi or her membership director Rhonda Martin.

The founder and her team have created a leadership program, an online training session, and they teach leaders how to build a more sustainable chapter.

Chapter leaders are called Queens, akin to Rodeo Queens, says Kristi, and they are issued a tiara. Each chapter also has a princess, and royal courts are optional. All Queens get a handbook with rules and regulations and they are monitored very closely.

“We keep in touch with them and just kind of mentor them and help them grow,” Kristi said, “What we have found to be successful so far is that a chapter can form and organize how they see fit.”

Some chapters now have more than 100 members and Williams said it can be a massive undertaking for many women who’ve never had careers, been on a committee or worked with volunteers.

“You’re having to teach them about communication, how to speak in front of a crowd,” she said, “And how to manage 100 women that are very opinionated.”

Farmersville resident Michelle Forrester, 53, had no problem taking the reins to start a new 40SC chapter in May 2020 after a work acquaintance and Decatur chapter member suggested she start one on the east side of the Metroplex.

A self-proclaimed horse lover who has had horses on and off throughout her life, Forrester moved to Farmersville in 2019 from Wylie via Nevada. She moved to have more land for horses again, and for her grandkids “to have the opportunity to be around animals and horses rather than playing electronics all day.”

Forrester said she reached out to Kristi and Wanda at the headquarters and told them where she was located. “They said there were no chapters at all on the east side and that kind of shocked me,” she said.

Starting a chapter in a pandemic may seem challenging, but not for cowgirls. Although she was considered an essential employee at her commercial management job, she’s been working from home. Forrester hasn’t been shy about reaching out to complete strangers through social media who are looking for riding friends.

40SC members fall into two categories; the riding and the non-riding members, so a horse is not needed to join this unique group.

“Some people don’t have to own horses,” Forrester said. “If they just love horses and they want to come out and have someone to talk to and be around them, that’s not a problem at all either.”

There are 17 Farmersville chapter members over the age of 31, which is in fact the “real” age requirement, although most members are in their late 40s, early 50s, and a few are in their 60s. Pamela Marley is the Princess, and the chapter has two “Lil’ Sisters,” women ages 21-30 who are sponsored by paid 40SC members. Lil’ Sisters are usually relatives, said Forrester, adding “They’re a lot of fun because they keep us on our toes also.”

Lil’ Sisters don’t get to participate in the established point system where chapters accumulate points based on events and participation, “but they can ride and do any event with us as well,” says Forrester.

The point system encourages chapters to plan multiple events, come up with ideas and more. Then, each February 1, members are awarded points to use toward merchandise: hoodies, belt buckles, saddles and more.

“It could be lunch, a rodeo…multiple chapters just went to a Fredericksburg Wine & Cheese event,” Kristi said. “Once it’s on a calendar it becomes an official event for them, and points are awarded. Anything can be put on the calendar as long as its legal and moral.”

Monthly meetings for the Farmersville chapter are held the third Wednesday of each month at The Stable in downtown Farmersville, or in Royse City to allow members from further away to attend.

Forrester said the group plans events which can include anything from attending horse shows, participating in horsemanship clinics, and even non-horse activities such as group painting events, wine tastings and more.

Although she’s only done trail riding — not competitions — in the past, Forrester said she doesn’t let that limit her when planning group activities.

“We try to make it where we touch everyone’s interest,” she said. “When we started, I didn’t have any idea about poles, sorting, obstacles, etc.”

“We can attend any events local chapters — Decatur and Graham — are having, and a new chapter just started in Wylie,” Forrester said. “It’s still like a big family because we see each other and plans and do a lot of things with the other chapters as well.”

The Wylie 40SC chapter was formed in March 2021 by Kat Brewer, a lifelong horsewoman who owns Double B Equestrian in Wylie. She has lived in the city for almost 22 years and shows, trains and owns 11 horses with her husband – and runs a 72-stall barn and arena with a 50-acre working horse and cattle ranch.

Brewer said she “had heard about the cowgirl group several years ago and wanted to start a chapter.” And when the timing was right, the equestrian evidently had no problem attracting 40SC members to the new chapter.

“We are at over 20 members upon our chapter creation,” she said. “Some aren’t officially on the roster yet.”

Brewer and Princess Christine Casales, a longtime friend and neighbor from the Farmersville chapter, kicked off the inauguration of Wylie 40SC with a “Happy Horsey Hour.” According to Brewer, the event was a hit and they have a full docket of future events planned.

Annual and group events are planned as well for 40SC chapters. The Williams own the Lazy TK ranch, a working horse and cattle ranch, in Breckenridge approximately 90 miles west of Fort Worth. Not only does it have indoor and outdoor arenas, there are barns, stock tanks, riding trails, and visitors can rent the ranch house or homestead house for events. The ranch is also the venue where the annual 40 Something Cowgirl retreat is held for the “Royals” the third weekend of October.

“We do some really heavy training and talk about issues,” Kristi said. “It’s a great retreat to relate and learn from other chapters.”

The last weekend in April, the Farmersville chapter met with the Coahoma chapter at the ranch for a fun girl’s time, said Forrester. The women took their horses and participated in sorting and trail rides, often with Kirsti and Ted accompanying them, “because they’re a lot like family.”

Since its founding in 2010, the women’s organization has increased its membership annually – even in a pandemic.

“Not all of our members are horse owners, but they still like to get out and go to rodeos,” Kristi said. “They all believe in what we talk about, which is the cowgirl spirit that is in all of us no matter our interests. It’s not about what you ride — it’s about empowering each other and having fun, especially after last year!”

Become a 40 Something Cowgirl!