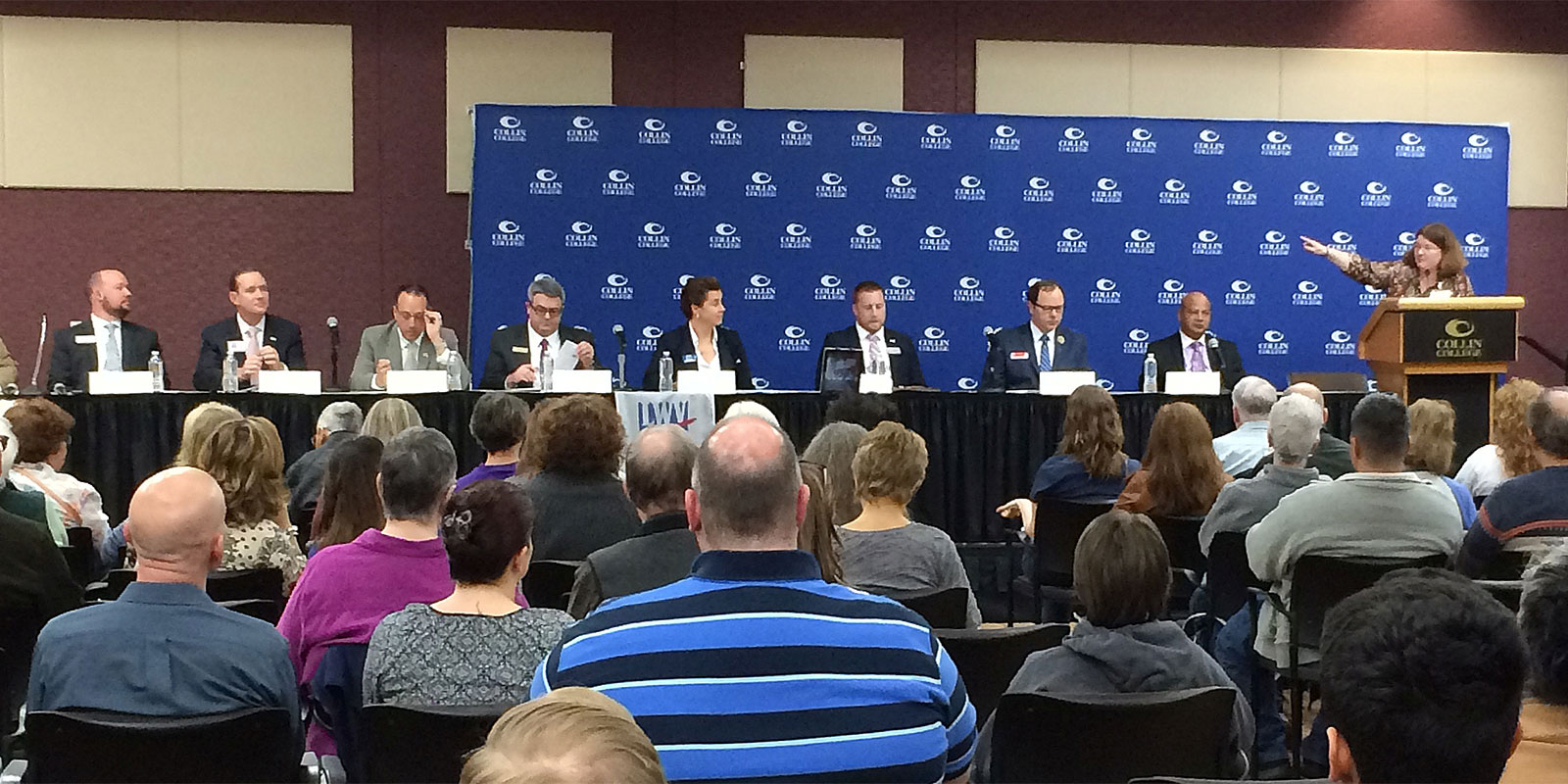 A league of their own

Long before Collin County residents headed to the polls for early voting in the Primary Election last month, volunteers belonging to a decades-old association logged many hours behind the scenes to ensure voters were registered and informed.

In a state the size of Texas — and in a fast-growing county like Collin — coordinating the sheer volume of information is not an easy feat. Yet, the League of Women Voters of Collin County continues to prove they truly are in a league of their own as they work to fulfill the nonprofit’s mission of ‘Empowering voters. Defending Democracy.’

Longtime LWV member and VP of Voters Service, Janice Schieffer, said the league’s
work, as far as candidate forums and early voting guides, is usually over when early voting starts, “but said this year it seems like there is no end to elections.”

“Even numbered years, there’s no rest,” she said, adding, “May local elections are a very busy time for us.”

The League’s election life got busier, said Schieffer, when they started to cover the whole county.

“Our Voters Guides cover every city and school board race as well as the state and county elections that occur in even numbered years,” she said.

In Collin County, the nonpartisan volunteer league has long been known for, and is often sought out by various groups, to moderate candidate forums. In 2020, because of the pandemic, the League started hosting candidate forums on Zoom. For this year’s Primary Election, Schieffer said they hosted 12 forums which are posted on the lwvcollin.org website.

“We’ve actually been able to expand our outreach when you think about the number of candidate forums that have been recorded,” she said. “And when you look at the number of views as an example, I mean, it just far reaches beyond what it was previously when we had those forums in person.”

Because of this new way of presenting candidate information, Schieffer said, they’ve been able to reach more people and increase their membership.

“We’ve been seeing a huge uptick in membership over the last five years,” she said, resulting from a keen interest in democracy issues.

As one of America’s oldest and most trusted civic nonprofit organizations, McKenzie said the increase in membership may be attributed to the fact that a lot of people are discovering “that a nonpartisan organization that has been around as long as the league must know what they’re doing.”

“We’ve seen a real hunger for being able to get in there, get active in the community, organizing and working on making voting information and voting available to as many people as possible,” she said.

Membership is open to any gender age 16 and older, and according to McKenzie, members of the Collin County league range from college-age to those that are 95-plus years of age.

“So that’s a wide range,” she said. “I don’t think there are a lot of organizations that have actual active members that span the decades like that. I think that really speaks volumes to the League of Women Voters and especially to Collin County.”

While some members have served as long as 50 years, after just five years McKenzie considers herself one of the “newer” members.

At the time she joined, McKenzie said she was very active and doing many things in the community, but wanted to be a part of a “very impactful organization that was nonpartisan…which is truly a strength of our organization.”

Schieffer said she started out as a volunteer one year, answering calls on Election Day. For her, she said it was the research that league members did on different issues and took positions on that really impressed her, as well as the fact that they provided “all the Voters Guide information.”

“So, I actually made an effort to look up the League and joined it in 2006,” she said. “I kind of jumped into the Voter Service area right away.”

After her inaugural year of learning, Schieffer said she’s been “pretty much in charge” of that area except for a few years when she served as president.

“So that’s really been my main focus,” she said. “And the area where I’m most engaged is providing that information to voters.”

Elisabeth MacNamara was first introduced to the LVW of Georgia as a presenter at a forum about the new constitution in 1980. Two years later, when she was just out of law school, she said they invited her to come back and participate.

“I thought it was the most wonderful process I had ever seen in my life — and I joined — and I’ve never looked back,” she said. “I love this organization.”

Over 40 years later, MacNamara has served in several leadership roles, including president at the local and state levels in Georgia, and as national president of the League of Women Voters of the United States from 2010-2016.

“I have gotten way more out of the league than the league has gotten out of me, that’s for sure,” she said.

Another perk of the league, said MacNamara, is the wonderful people you meet, so when you move from one state to another like she did, “you have an instant community.”

For over a decade the LWVCC has been using Vote411, a national website developed by the League of Women Voters Education Fund in 2006.

It has been drawing a lot of attention over the last few years, said MacNamara, referring to the website as “one-stop-shopping for voters.”

Personally, MacNamara said she experienced the benefits of using Vote411 after moving to Texas.

“It’s a challenge in Texas as a new voter figuring out all of these elections,” she said. “The court system is complicated. Things don’t match up the way they do in Georgia. Without the league and without 411, I would be lost in a voting booth…just lost.”

The database is available in every state and includes a level of basic information that Vote411 will supply, said MacNamara, such as voter registration, nationwide voting rules, state election laws, voter requirements at the polls and such, “but Collin County provides way more than that.”

“States like Texas have just embraced it and taken full advantage of all the features that combine what Vote411 offers,” she said, adding that Texas “has been very diligent” about making sure that the Voters Guides have local elections and include everything for the constitutional amendments on the site.

“And that’s why you’re going to see Voters Guides out there and the ability to build your ballot,” she added. “It has been a fabulous resource that the national league has been able to provide.”

The League of Women Voters is a grassroots organization that operates at the national, state, and local levels. Aside from voter information and support, they are also involved in programs and advocacy.

The LVW-TX, defines a program as “the education and advocacy platform adopted by members to empower voters and defend democracy.”

Ideas originate at the local league, said Schieffer, and every February, members can participate in a program planning meeting to propose topics for study or action in the next year. Following a step-by-step process, including thoroughly researching “facts and issues,” members will discuss, then a position is created based on consensus. After a consensus meeting, and if enough members approve, said Schieffer, they adopt a position at an annual meeting.

According to the Texas league, “the League of Women Voters takes action on an issue only when they have a position addressing it. If the members have not studied and come to consensus on it, the League has no position and therefore cannot take action.”

Positions taken at the national level — such as voting rights — can also be supported or advocated on at the local level.

“We speak with one voice on a national issue,” MacNamara said. “You’ll hear the same message in Washington and in other communities.”

While the Collin County league has issues on a variety of topics, Schieffer said, the ones they are the most active on have to do with voting rights and democracy “because that’s our core. That’s why we’re here.”

Since the 2020 election, MacNamara said, “when we started seeing so many bills coming down the pike putting more and more requirements on voters, poll workers and administrators, the League has been extremely active across the country working as hard as we can to make sure we have safe and secure elections.”

Following the passage of Senate Bill 1 in 2021, which expands voting hours and tightens voting restrictions, MacNamara said those changes in election laws aren’t just impacting the voters, “they also impact the folks that administer elections.”

“We’re there not to just support voters,” she said, “but those (volunteers) just trying their best to make sure our elections go off smoothly and make sure that everybody following the law still has the best chance to be able to vote.”

The League of Women Voters is the only organization whose roots go directly back to the mainstream women’s suffrage movement — the National American Women Suffrage Association (NAWSA).

As the ninth state to ratify the 19th Amendment on June 28, 1919, Texas suffragists got an early start by dissolving the Texas Equal Suffrage Association and creating a State League of Women Voters in October 1919 in San Antonio.

The idea for the LWV was proposed just a few months earlier by NAWSA President Carrie Chapman Catt “as the official support organization for newly enfranchised American women,” reports the Texas State Historical Association. Then, under the direction of its first Texas president, Jessie Daniel Ames, the LWV focused its efforts not only on supporting, but also educating “the newly enfranchised women voters of the state.”

Nineteen years later the organization came to Dallas, but it would be another 36 years before it made its way to Collin County thanks to the efforts of Dallas member Meg Titus who placed an ad about the League in the Plano newspaper in 1974.

“We were founded by women who believed in the power of women to create a more perfect democracy,” MacNamara said. “And for the last 102 years, we’ve been defending our democracy by empowering voters. Now our goal at this day and age, of course, is that everyone has the right, the desire, the knowledge, and the confidence to participate. To make that ballot box as accessible as possible to every eligible voter. It’s all coming down from the same roots.”