Something to Chew On 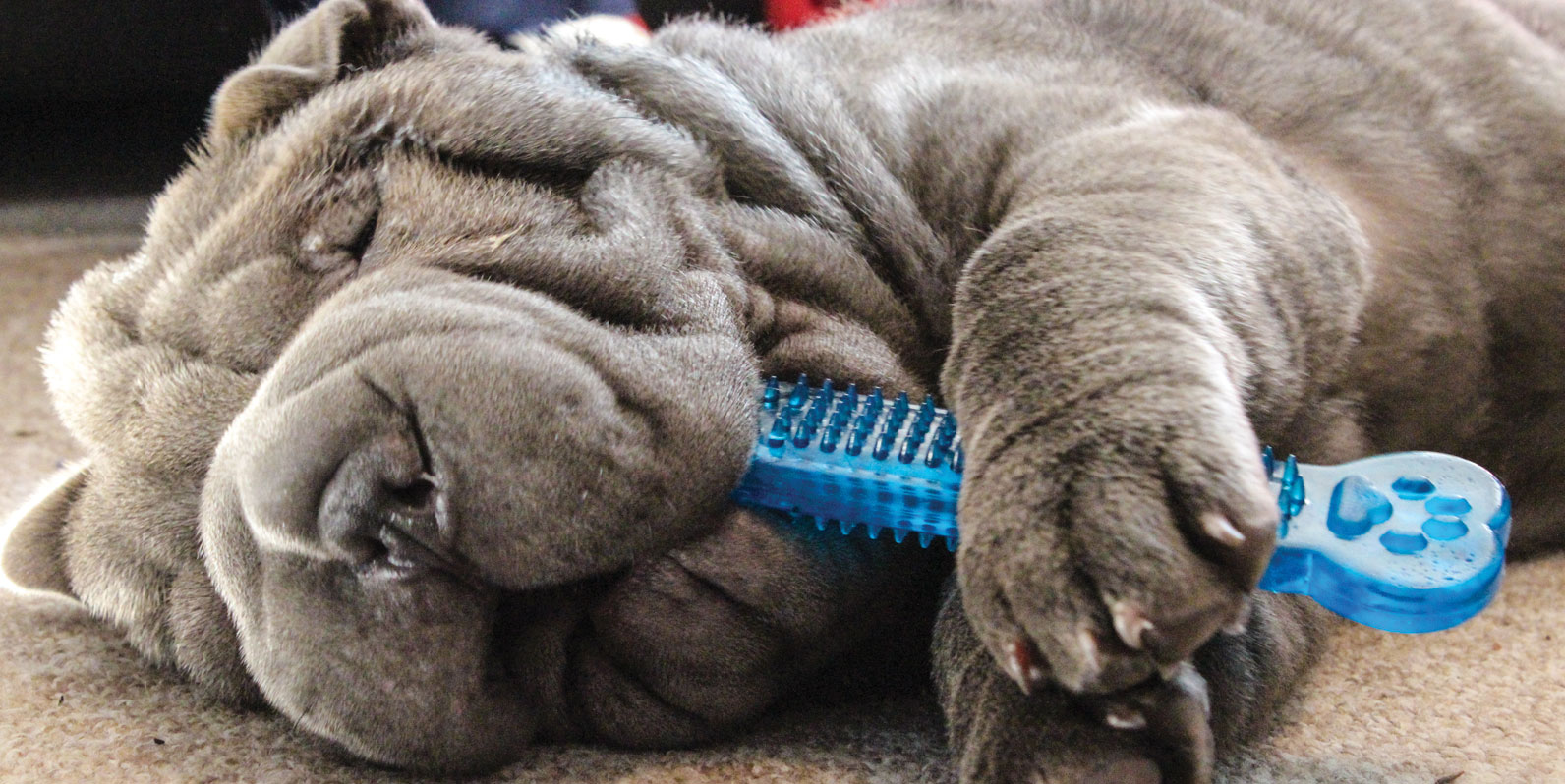 Quick, what do the following have in common: Wadded-up jockey shorts; balls (rubber, plastic, tennis, and all other sorts); pantyhose (of all hues); rocks.

They’re among the items most frequently chewed, swallowed and then surgically removed from dogs’ gastrointestinal tracts. That’s according to claim adjusters for Nationwide Pet Insurance, based on years of insurance claims for what they term “foreign-body ingestions”.

As delectable as all those objects apparently are to canines, not one of them can compare with the most frequently consumed-then-removed item: Dirty, stinky, but oh-so-reminiscent-of-the-wearer socks.

Dogs can and do swallow things you’d think they’d avoid or ignore, like corn cobs and hair ties or ribbons and things as big as tennis balls (which have, in fact, been surgically removed, especially among Labs and Lab mixes who, experts say, are the dogs most apt to chew and swallow something they shouldn’t.)

“If a dog can get an object into his mouth, he can swallow it,” says San Antonio veterinarian Dr. Wayne Eldridge, owner/operator House Calls For Pets, based in San Antonio.

And that, for pet owners, is a reality that demands dog-owner vigilance.

“When dogs are left alone, they will often find things to chew, sometimes out of anxiety, sometimes out of boredom or loneliness,” he says. So owners should be rigid about picking up and putting out of reach anything a dog might zero in on and begin chewing.

“It’s much easier for a dog to swallow an object than to pass it,” Eldridge says.

The subsequent blockage is uncomfortable, dangerous, and can be fatal.

Some percentage of foreign bodies may pass or be regurgitated without intervention, but Eldridge says it shouldn’t be assumed that will happen and advises owners to take the dog to a vet for advice the moment there’s a concern a dog has ingested something he shouldn’t have. Most objects will have to be surgically removed, a process that runs about $1000 or more in most parts of the country, subjects the animal to anesthesia and requires the owner to take post-op precautions so stitches hold.

Sometimes you see the ingestion or evidence of it (such as pantyhose that were draped over the chair when you left that have gone missing). Sometimes you are oblivious. In that case, you may see symptoms 24 to 48 hours or so after the item was swallowed. Vomiting more than once, loss of appetite, diarrhea or painful belly are all indicators that something may have been swallowed and is stuck.

Many of the things that dogs swallow are random personal and household goods like pins, coins, popsicle sticks and kids’ playthings, but some are actually items intended for dogs, like chew toys or objects that people give their dogs to chew, like bones and sticks.

Vets all over the country have reported surgically removing parts of pet toys that have been gnawed off and swallowed as well as chunks of bones or huge wads of rawhide. And many vets report that safely munching a particular object for years is not necessarily a guarantee that the dog will never wind up swallowing it at some point.

Nor is the fact that a dog has already had one surgery enough to dissuade him from swallowing in the future and requiring another operation to remove it.

Most vets and other experts say hard rubber Kongs — sufficiently large for the particular dog (which means he can’t get it into his mouth) — are a safe chew object for dogs, as are Nylabones.

As for cats, “they’re not really a big risk group,” says Eldridge. There is certainly the occasional feline foreign-body ingestion, he says, most often string, when one end gets caught up on the back of the tongue and the other end passes down the gastro track.

But the vast majority of potentially dangerous ingestions occur with dogs. “They are,” says Eldridge, “like mini vacuum cleaners.”

Pet owners should also be careful about their dogs ingesting toxic or poisonous substances. You can find the list of harmful items by going to www.aspca.org/pet-care/animal-poison-control