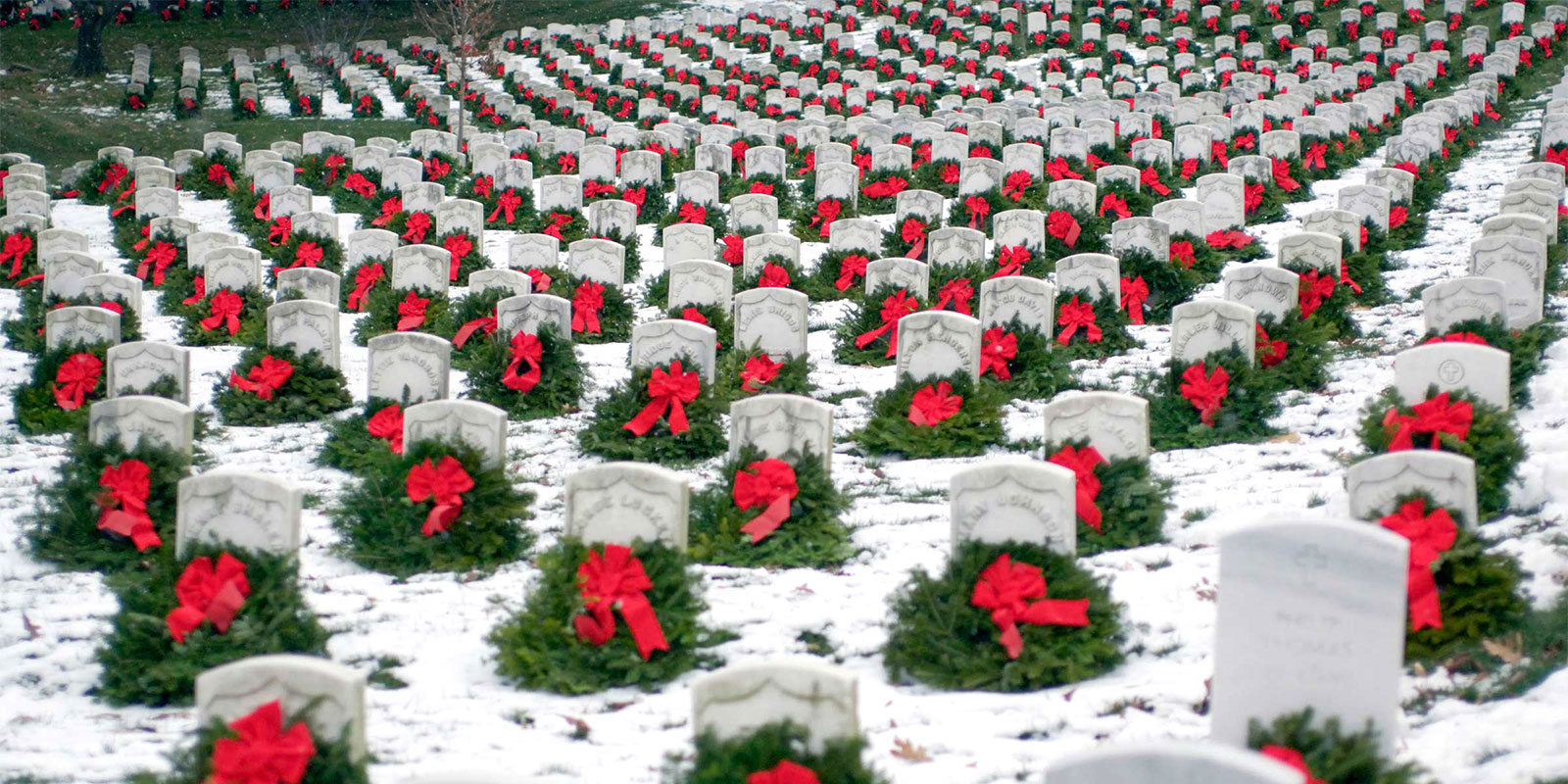 One of the world’s largest veterans’ parades will commence on December 11 this year as Patriot Guard Riders accompany a convoy of tractor trailer trucks for its annual pilgrimage from Columbia Falls, Maine down the east coast. The trucks, packed with boxes of evergreen wreaths, will make 20 stops along the way, at schools, veterans’ organizations, monuments and memorials before arriving at Arlington National Cemetery December 18 for National Wreaths Across America Day.

The idea for Christmas wreaths honoring veterans at Arlington National Cemetery was spearheaded 30 years ago by Morrill Worcester, the owner of a Maine wreath company. His vision, along with the support of a Maine senator, veteran groups, a trucking company, and other organizations, quickly developed into an annual tribute. For years, the ceremonies were quietly held at Arlington National Cemetery until a photo showing the stark contrast of the white headstones, adorned with evergreen wreaths with red bows, went viral in 2005. Two years later, Wreaths Across America — a nonprofit — was formed by the Worcester family and others “with a goal to expand and continue the wreath-laying effort and support other groups who wanted to do the same.”

In North Texas, the Wilson Chapel Cemetery in Lowry Crossing, the Pecan Grove Cemetery in McKinney, and the Van Alstyne Cemetery will participate in Wreaths Across America ceremonies on that same Saturday as a final end-of-year tribute.

Many of the area cemeteries, such as those mentioned, are sponsored by chapters of the National Society Daughters of the American Revolution. The NSDAR is a 125-year-old nonprofit, “nonpolitical volunteer women’s service organization dedicated to promoting patriotism, preserving American history, and securing America’s future through better education for children,” states dar.org.

The John F. Greer Chapter, NSDAR has sponsored the Wreaths Across America Ceremony at Wilson Chapel Cemetery in Lowry Crossing since 2018. Linda Dillard, of Princeton, was chapter regent (official representative) at the time the WAA program was presented.

The chapter wanted to be involved, said Dillard, so she turned to Friends of WCC, Inc., the nonprofit that oversees Wilson Chapel Cemetery, and where her husband was a board member.

“This provided me with access to the cemetery records to determine how many veterans were buried at Wilson Chapel Cemetery,” she said.

The first year, Dillard said she signed up on her own behalf as the WAA location coordinator. NSDAR members and other volunteers helped collect donations before the cutoff date to order the ceremonial wreaths.

Dillard said they were partially funded for the first ceremony, enabling them to “place wreaths on graves that had been designated by donations, and then on the graves of the World War I veterans as 2018 was the 100th anniversary of the ending of World War I.”

“It was such a wonderful experience,” Dillard said, “that the chapter signed up as a fundraiser group in 2019.”

They have continued each year since, raising funds to purchase the wreaths. “We have been fully funded every year,” Dillard said. “Plus, we are currently raising funds for 2022.”

There is a lot of behind the scenes organization and preparation for the event, said Dillard, “but it is probably one of the most rewarding events I’ve had the opportunity to coordinate.”

The planning for WAA begins immediately after the ceremony is over and Dillard keeps a donation jar ready for the following year’s wreaths.

“I update the cemetery Facebook page, and our website on WAA,” she said, adding, “it’s “critical that any donations reflect our location ID.”

By November, Dillard makes sure she has an accurate wreath count to report to WAA.

The wreaths cost $15 each and must be ordered through the nonprofit. Individuals can sponsor a wreath for a veteran’s grave at participating cemeteries across the U.S. via the wreathsacrossamerica.org website or support local NSDAR chapters partnered with cemeteries.

“Each wreath laid must be paid for in advance, so we accept donations throughout the year,” Dillard said. “Many families sponsor the wreaths for their loved ones, and there are others, such as myself, with no veterans buried here, and I support the purchase of wreaths.”

Now as the Friends of WCC, Inc. treasurer and record keeper of all the graves and burials of the Wilson Chapel nonprofit, Dillard said, “it has certainly made it easier to keep track of all of our veterans.”

Ten days or so before the WAA ceremony, Dillard said she asks for volunteers to help place U.S. flags on veterans’ graves at the cemetery so they may be easily identified for wreath placement.

The week before the ceremony, Dillard says she is “on pins and needles” waiting for the phone call notifying her as to when the wreaths will be delivered and “not venturing far from home.”

“When I get the call, it might be the night before or an hour before he arrives,” she said.

Once Dillard meets the truck in the Princeton High School stadium parking lot, she and any available volunteers unload the boxes of wreaths into her pickup “with side boards on it” and store them until the ceremony.

“Each box has nine wreaths, so it’s a lot of big boxes,” she said.

On the day of the ceremony, fresh evergreen wreaths are placed in boxes throughout the cemetery for attendees to place on graves. In Texas and across the U.S., Wreaths Across America ceremonies start promptly at 11 a.m. Following the ceremony, wreath-placing protocol is explained to attendees as family members are excused first to place wreaths on the graves of their loved ones before other attendees follow suit.

Attendees are asked to  honor the veteran by either placing a hand over their heart, or if they are a veteran or active duty themselves, they salute the veteran. Each attendee then says the name of the buried veteran aloud, thanks them for their service and sacrifice, and reflects on that person and their life so they are not forgotten.

For Dillard, every ceremony is very emotional.

Her solution, said Dillard, is to pay to order wreaths for her dad and uncle, and any extras she receives from WAA she takes them to Hillsboro the next day.

“There is a veteran section of that cemetery,” she said. “And I will lay the extra wreaths there, so they are remembered.

“Every donation and wreath sponsorship is a meaningful gift from a grateful American who knows what it means to serve and sacrifice for the freedoms we all enjoy,” said Karen Worcester. “We are so grateful to the good people of this great nation for participating in our mission to Remember, Honor and Teach.”