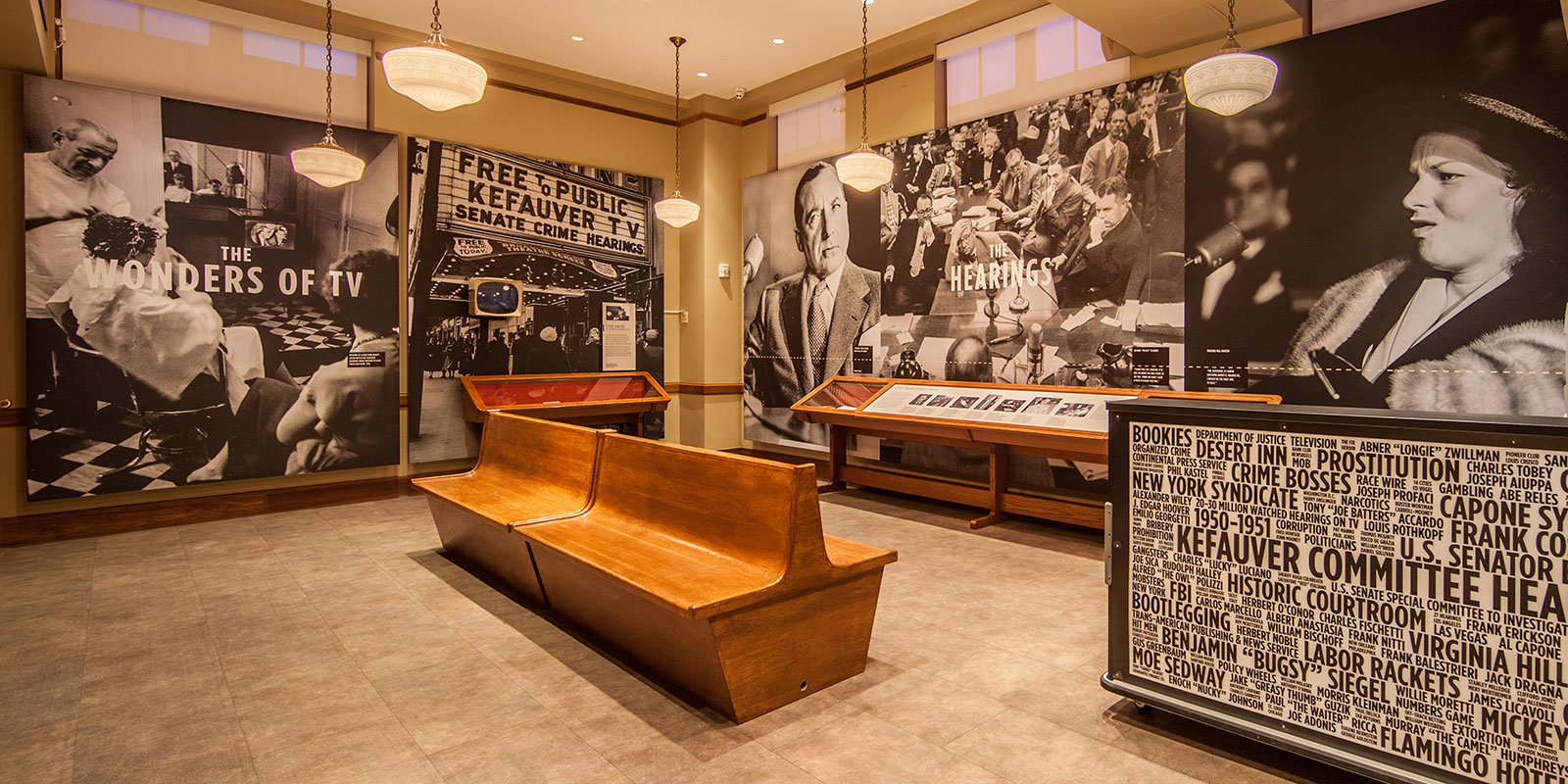 Murder is on my mind a lot. At any given time, I’m analyzing crime scenes alongside TV detectives, trying to identify a killer in novels, listening to true crime podcasts, or watching documentaries of unsolved deaths. My obsession with the Ted Bundy-like serial killers of the world or the million unique ways to kill someone borders on unhealthy (my husband sleeps with one eye open).

To be clear: I don’t like murderers. I’m just fascinated by the psychology behind why criminals do what they do and how some crimes are so complicated and confusing they can never be truly figured out. If this is you, then consider taking your killer obsession to the next level by visiting a true-crime museum in the U.S.! Yes, there are actual museums dedicated to exploring crimes and showcasing the real-life heroes whose job is to catch the bad guys. It’s time embrace your true crime fantasies — in a healthy, socially acceptable way, of course.

Start your journey into the darkness at the amazing Alcatraz East Crime Museum in Pigeon Forge, Tennessee, just over 200 miles east of Nashville. Billed as “the most arresting crime museum in the United States,” Alcatraz East is known for its entertaining interactive exhibits and original artifacts designed for all ages. Take pictures by the infamous white Ford Bronco that O.J. Simpson drove during his televised police car chase or examine the typewriter Ted Bundy used in prison. Speaking of Bundy — known as the most notorious serial killer in history — he has a temporary exhibit (open through October 2022), which looks at his final crime, arrest, trial and death.

Permanent exhibits inside Alcatraz East uncover criminal profiles, the penal system, victim’s stories, crime prevention, forensic science, law enforcement and the justice system. You can feel the cold iron bars of a jail cell; learn how police use DNA, blood splatter, fingerprints, and more to investigate a crime scene; and get to know the police officers, FBI agents, and other law enforcement agencies who work to keep us safe.

Recently, the museum added a cute canine exhibit, where the public can learn about the Tennessee Bureau of Investigation’s (TBI) K9 unit. For example, K9 Zeus is an Electronic Storage Detection (ESD) canine, the first and only ESD canine in the bureau, who is strained to sniff out electronic storage devises, which could potentially help with crimes as terrible as child pornography and terrorism. The TBI exhibit (open through June 2022) also features missing children and a local cold case, the brutal 2015 murder of Donald Lawton in Kodak, Tennessee, and more. The museum is open daily from 10 a.m.-9 p.m.; general admission tickets are $26.95 for adults. alcatrazeast.com.

Like your crime with a side of family history? Head to the National Museum of Organized Crime & Law Enforcement (aka, the Mob Museum) inside a beautifully restored former post office and courthouse in Las Vegas, Nevada. This unique museum highlights the power struggle between organized crime and law enforcement throughout the ages, including immersive exhibits, hundreds of rare artifacts, and fascinating stories from that time.

See the brick wall from the 1929 St. Valentine’s Day Massacre in Chicago. Check out the Firearm Training Simulator and Crime Lab Experience, which shows different ways law enforcement apprehends and prosecutes criminals. Explore the Prohibition-era exhibit called The Underground, with stories and artifacts during a time of bootlegging, which also includes a working distillery and speakeasy that serves Roaring ‘20s-themed cocktails. You can also see artifacts from Al Capone, Dion O’Bannion, George Moran, and other famous mobsters, as well as the Organized Crime Today section, showcasing how organized crime has adapted for modern times. Hours for the Mob Museum are Monday-Friday 10 a.m.-8 p.m., and Saturday-Sunday from 9 a.m.-9 p.m. The Underground is open daily from noon to 10 p.m. themobmuseum.org.

You don’t have to go far to learn about one of the most famous murders in Dallas — the assassination of JFK. Head to The Sixth Floor Museum at Dealey Plaza, the site where President John F. Kennedy was murdered in 1963. Exhibits here revolve around the life, assassination, and legacy of JFK within the context of 1960s history and culture. Through May 9, 2021, you can see the moving Art Reframes History exhibit, showcasing creative artwork, music and performance that was inspired by JFK. Or simply relive that tragic day, watching videos of the motorcade where shots were fired, examining crime scene photos, and learning about the conspiracy theories surrounding the event. The exhibit is open Wednesday-Sunday from 10 a.m.-5 p.m., with adult tickets for $18. Learn more at jfk.org.

Feeling morbid — or just want to scare yourself silly? You can’t go wrong with the Museum of Death in New Orleans, Louisiana. This museum is for mature audiences only, as it features grim and terrifying artifacts and exhibits including coffins, skulls, Theatre of Death, antique mortician apparatuses, Manson family photos, crime and morgue scene photos, art and letters from serial killers, graphic car accident photos, pet death taxidermy, cannibalism and more. It’s pretty dark stuff, OK? You’ve been warned! The Museum of Death is open daily from 10 a.m.-6 p.m.; $15 per person. museumofdeath.net.

If you’ve ever wondered what happens to murderers and other criminals once they are brought to justice, then find out at the Eastern State Penitentiary in Philadelphia, Pennsylvania. This is the home of the world’s first penitentiary that held approximately 80,000 people during its 142 years in operation and is now an interactive museum. Go on “The Voices of Eastern State Audio Tour,” narrated by actor Steve Buscemi and featuring voices of former prisoners and correctional staff. Throughout the tour, you will see Al Capone’s cell, Death Row, Cellblock 11 (with artist installations), the prison’s synagogue and an exhibit on Jewish life, and the award-winning “Prisons Today: Questions in the Age of Mass Incarceration” exhibit. The museum is open from 10 a.m.-5 p.m. Wednesday-Sunday, with tickets available online for $19. easternstate.org.

For serious true-crime junkies, visit an iconic landmark and museum: the Lizzie Borden Bed & Breakfast and Museum in Fall River, Massachusetts, one hour south of Boston. This is the actual home of the infamous Lizzie Borden, who was said to have murdered her parents, Andrew and Abby Borden, with a hatchet — although it was never proven. Visit the house to see everything as it was that day in 1892, including replicated furnishings and décor, as well as original hardware and doors. If you are feeling extra brave (and aren’t faint of heart), then you can actually spend the night in Lizzie and her sister, Emma’s, suite, or one of the other family rooms. Guests can go on a spooky night tour, complete with a visit to the basement. Good luck sleeping after that! Reserve your room and/or your tour at lizzie-borden.com.

Whether you want to help solve over-100-year-old mysteries, puzzle over conspiracy theories and unexplained murders, develop a newfound appreciation for our justice system or resolve to never commit a crime, then you should visit one of these cool museums this spring. I know you’re just dying (sorry, I couldn’t resist!) to check them out.