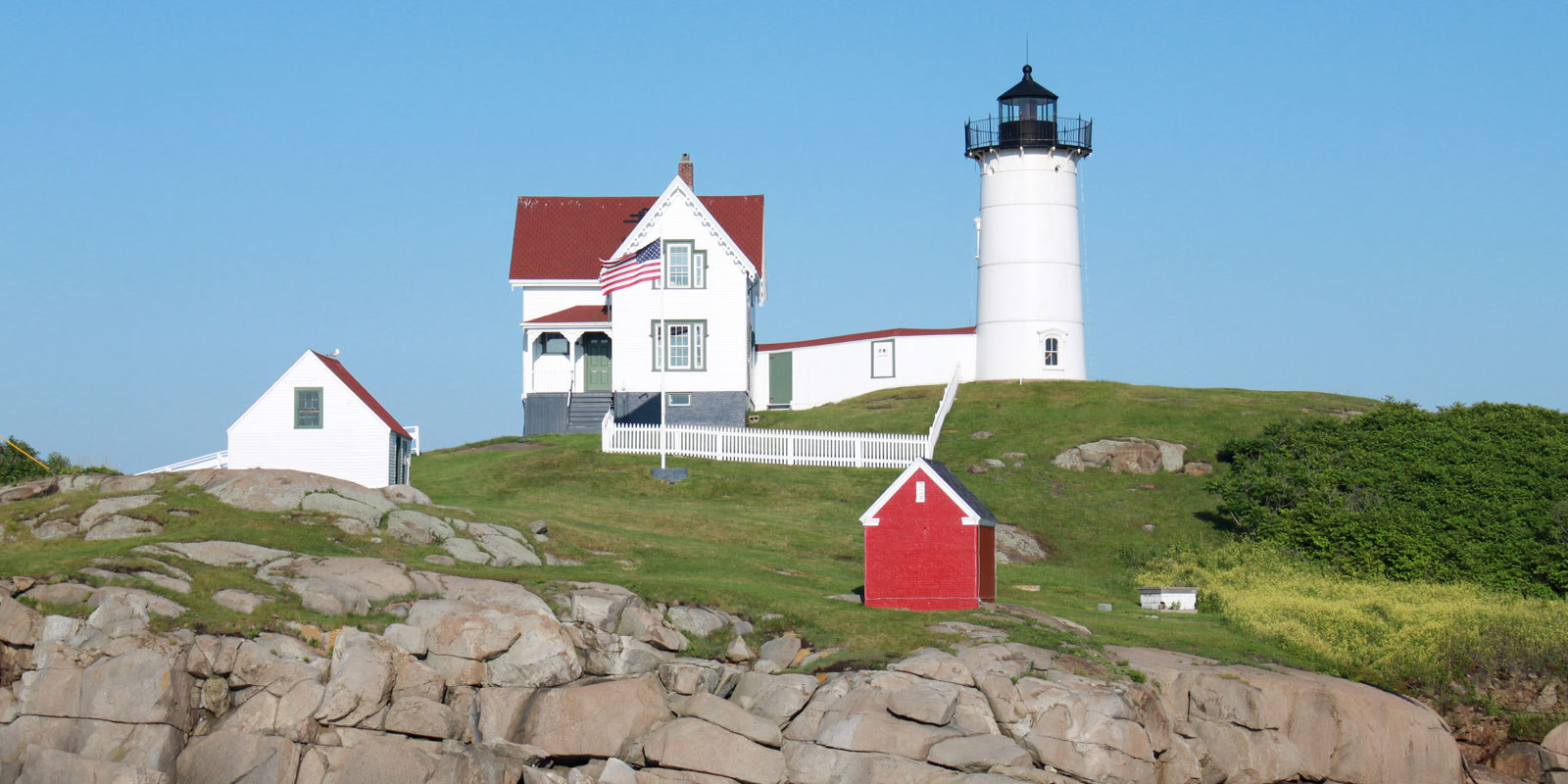 Tall, serene, and stark in contrast to the landscape, there’s something mysterious, yet beautiful about lighthouses. These iconic structures, built as early as 1716, provide a beacon of light and guidance to mariners to protect them from jagged coastlines and to help them follow shipping routes. With over 1,000 lighthouses scattered in the U.S from coast to coast, and on the Great Lakes, how about taking a trip to brush up on your maritime history this year? Here’s a few suggestions to get you started.

Though commonly called “The Nubble Light,” this Maine lighthouse is perhaps one of the most photographed lighthouses in the country.
It sits on a rocky 2 ½ acre island accessible only by boat. Although 1807 was the year a lighthouse was first requested on the Nubble, the actual structure wasn’t built until 1879. It is a 41-foot-tall cast iron tower with a keeper’s cottage just a short distance away. During the days when it was inhabited by a keeper, supplies were delivered to the island via a basket hanging over the ocean on a cable pulley system. The light from the lighthouse’s Fresnel Lens is visible from 13 nautical miles on a clear day. The island is not open to the public, however, there are places to sit at Sohier Park (across from the lighthouse) and admire the view, watch the birds or seals
or just eat lunch. You can visit the lighthouse all year-long.

The gift shop and restrooms are open from April – October.

If you happen to be passing through the tiny state of Rhode Island, take the time to visit Block Island Southeast Light. The lighthouse offers amazing views out over the Atlantic on Block Island. At 7,000 acres,  seven miles long and three miles wide (at the widest point), the island is bigger than other lighthouse islands. There are actually two lighthouses, however, Southeast Light is considered the easiest to access. The first lighthouse was built on the northern tip of Block Island in 1829 and Southeast Light was built in 1875 to help the
southern coasting trade access Long Island. The structure is a 52-foot red brick tower that sits upon granite blocks. The lighthouse was moved 300 feet inland in 1993 due to the erosion of its original perch closer to the sea atop Mohegan Bluffs.

Originally a static light, the lighthouse was changed to flash green every 3.7 seconds after it was repeatedly mistaken by ship captains to be a mast light on another ship or the fixed light at Montauk. Cape Lookout’s lens remains active in the lantern room at the Southeast Lighthouse and during the summer the public is allowed inside the tower, which houses a small museum and gift shop. Tower Tours are offered (though not on a regular schedule) and visitors can learn about the lighthouse and about shipwrecks along Block Island shores.

Georgia’s Tybee Island Lighthouse is a well-kept historical gem that shouldn’t be missed if your vacation takes you to the Georgia coast. Built in 1736, it is one of the oldest and tallest lighthouses in Georgia. Tybee Island Light Station has survived over 285 years and even today the lighthouse continues to guide ships into the Savannah River. The structure has been rebuilt several times and moved inland some to save it from the sea. The lighthouse tower is 145 feet tall and has three light keeper cottages nearby. Small private tours of the lighthouse are offered and last about ninety minutes. Tours include a climb to the top of the lighthouse to experience a Tybee Island sunset. There are multiple historic support buildings on its five-acre site and the trip would not be complete without a visit to the Tybee Museum located in a historic Endicott Battery, which was built as part of Fort Screven during the Spanish American War. Established in 1961, visitors can learn all about the Fort’s role in World War I and World War II. There are seven rooms containing artifacts and exhibits covering more than five centuries of history.

The St. Augustine Lighthouse is the site of the oldest, permanent aid to navigation in North America. It is Florida’s first lighthouse that originated from a series of wooden watchtowers. According to several archival maps and documents, it is believed that some of the early towers held a flame. The first official light in St. Augustine was lit in an existing coquina structure in May of 1824 by Florida’s American territorial government.

The lighthouse rises 165 feet above sea level and contains 219 steps that are climbed by visitors. At the top, the original, first order Fresnel lens still serves as the beacon, but today it is lit by a 1000-watt bulb and maintained by the museum and volunteers. The St. Augustine lens is unique with 370 hand-cut glass prisms arranged in a beehive shape, twelve feet tall and six feet in diameter.

There is a nonprofit museum onsite that funds area programs and a maritime archaeology program that studies shipwrecks in the waters of the Nation’s Oldest Port.

Once a month, guests can view the full moon rising and the beauty of the sun setting. In addition to the view, guests can enjoy champagne and hors d’oeuvres. Want a less romantic tour? Ghost tours are available Friday, Saturday and Sunday evenings and can last up to two hours. EMF meters are available to rent.

Built in 1821, the Marblehead Lighthouse is the second oldest lighthouse and the oldest continuous working lighthouse on the Great Lakes. It was also manned by the first female lighthouse keeper in the United States. Originally known as the Sandusky Bay Light, it is situated on the easternmost tip of the Marblehead Peninsula, a dangerous, rocky shoreline. For years the lighthouse helped boats navigate the entrance to Sandusky Bay and eventually other lighthouses were added to the region. On a clear day the 85 feet- high lighthouse has a clear view of Kellys Island and Cedar Point, as well as the Sandusky area.

​This lighthouse boasts a rare three and one-half order Fresnel lens, and a functional iron staircase dating to the early 1900s.  It has a masonry finish over the original limestone exterior. Inside is a brick stack constructed in the late 1800s to raise the tower’s height by fifteen feet. The view from the top of the lighthouse showcases several Lake Erie islands, a glacial alvar below, and a view of the Cleveland shoreline on sunny days. The on-site Keeper’s House was built in 1880 and is now a museum which displays artifacts, historical photos, and other materials which represent the rich and colorful history of the lighthouse and the Marblehead area. The beacon and its adjacent Keeper’s House became an official Ohio State Park in 1998.

Texas boasts 16 lighthouses along the coast, yet Port Isabel is the only one open to the public. The point has a long history of conflict. Before the lighthouse was built the point served as an American supply depot during the war. After the war the point continued to supply two military stations on the Rio Grande–Fort Brown and Ringgold Barracks. Because of the heavy shipping traffic through Brazos Santiago Pass to Point Isabel, a navigational light became a necessity. The lighthouse was completed in 1853 with a stationary white light that could be seen for almost 16 miles. The Civil War brought armed conflict again to Port Isabel and both sides used the lighthouse as an observation post. For the next two decades its beacon guided large numbers of commercial vessels to southernmost Texas. The light was extinguished for the second time between 1888 and 1894 during negotiations over ownership of the site; when finally reactivated, its years of service were numbered. The lighthouse was abandoned permanently in 1905 after shipping traffic declined. Thankfully, the state took over in 1950 and the Parks and Wildlife Department completed repairs in 1970. The tower now sports a mercury vapor light to aid navigation. Visit the lighthouse daily from 9 a.m. to 5 p.m. Tickets may be purchased in the Lighthouse, the Keepers Cottage (Chamber of Commerce & Visitors Center), the Treasures of the Gulf Museum and the Port Isabel Historical Museum.

If you’re planning a trip to Mendocino County anytime in the near future, make sure you visit Point Arena to see the majestic 115-foot tall lighthouse. If you have the energy, take a tour and climb 145 steps to the top and enjoy the spectacular views from the tallest lighthouse on the West Coast. Book a night tour on the full moon of each month and you might get a special treat. If you want to stay for a night, there is a Head Keepers house, two Assistant Keepers houses, a Keepers apartment and a Keepers room for rent. Another special site to see while there is the annual Gray Whale migration from late November through May. Point Arena is considered one of the best whales watching spots on the West Coast. The lighthouse is a 2-4-hour drive from the Bay Area and Sacramento. It is open every day except Thanksgiving and Christmas.