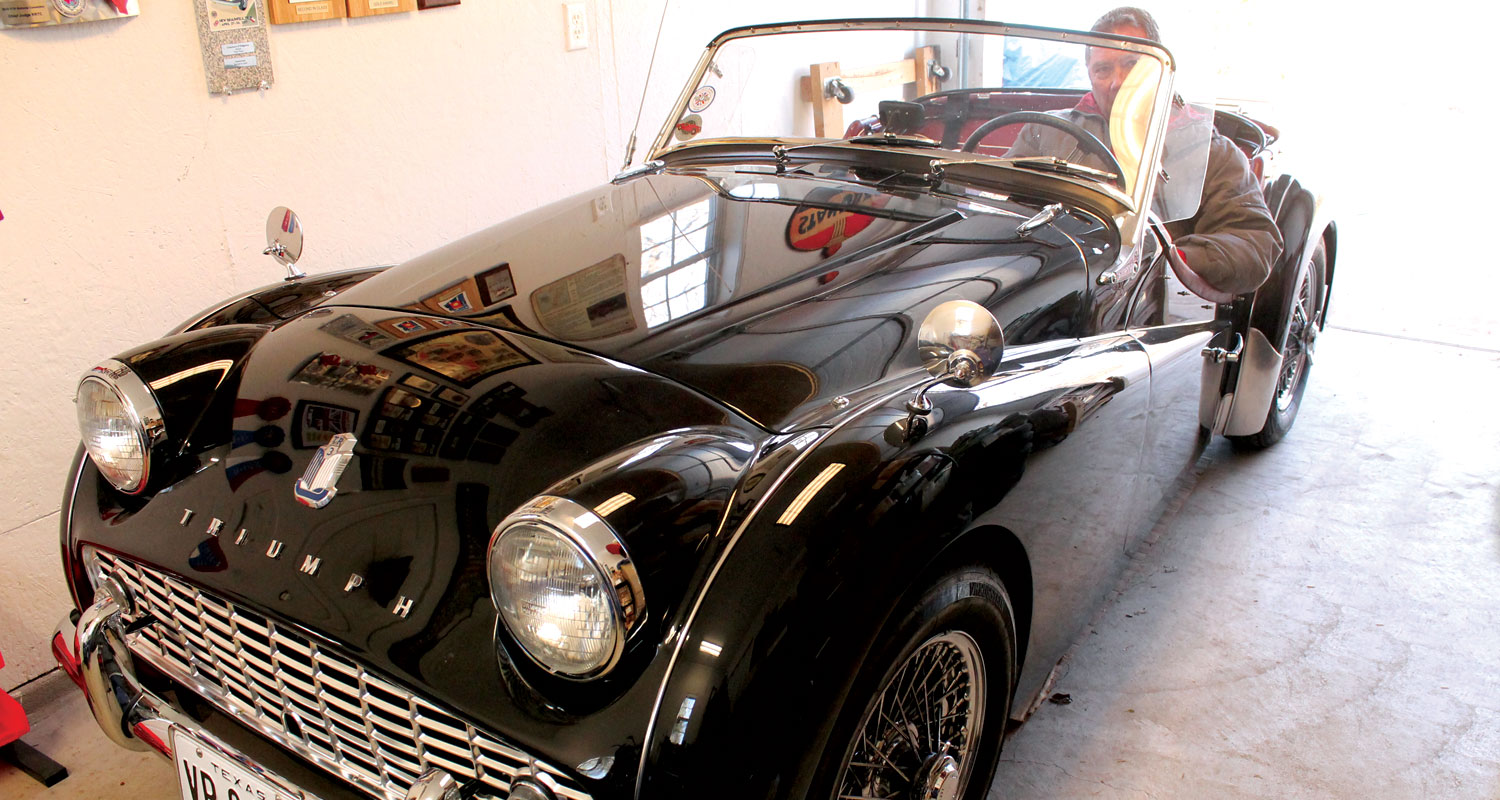 Murphy resident Mike Sabelhaus can’t point to a particular “gotcha” moment explaining his fondness for Triumph sports cars, but over the years he has accumulated a collection of five of the automobiles and actively participates in Triumph car club events.

“I have no favorites. You like them all and they all have their pluses and minuses,” Sabelhaus said.

The Murphy car aficionado does his own mechanical work and has taken projects down to the frame for rebuilds. He will, however, take the vehicles to professionals for painting.

Growing up on a farm in Indiana, Sabelhaus said that he developed an aptitude for mechanics at an early age by working on tractors and farm equipment. He also gained knowledge by diving into restoration projects, acquiring workshop manuals for
specific car models and getting tips from other Triumph enthusiasts.

After serving a hitch in the navy during the Vietnam War, Sabelhaus enrolled in college and bought a 1974 Pontiac Firebird, a start to driving eye-catching vehicles. He and his wife, Vicki, moved to Texas in 1981 and shortly afterward bought a Triumph TR6, a 2-seat sports car manufactured from 1969-76. They sold the sports car when they decided it was impractical, and perhaps unsafe, after becoming parents, but bought another TR6 in about 2000.

Sabelhaus completed a rolling restoration on the red TR6, bringing it up to par mechanically and cosmetically. In the process, he added electronic overdrive to make it a little more fuel-efficient.

“I, generally, made it roadworthy,” he said of his effort.

Last summer, he and Vicki took the car on a 1,000-mile drive around Colorado as part of a Classic Car Adventures tour, and they drive the sports car regularly to keep it in top condition.

The most rare car in the collection is the 1937 Triumph Gloria Southern Cross, a 2-seat roadster with right-hand drive. From 1934-38, Triumph made a number of Gloria models that included saloons, coupes, tourers and 2-seat sports cars. Sabelhaus’ car is one of only 13 sports cars remaining from 1937 production, and three of those are in the Dallas area.

“The amazing thing is that there are three Gloria Southern Cross cars here in Dallas,” he declared. “This is a pretty rare model.”

The model owned by the Murphy couple has a deep red body with sweeping, black fenders, wire wheels, including two spares strapped on the back. The car is powered by a 1232 cubic centimeter, 4-cylinder motor that produces 10.8 horsepower. Innovations on the 1937 car were an electric fuel pump, adjustable suspension and lighted, flip out flags, “Trafficators,” for turn signals.

The couple lived in England during 2008-’10 and Mike became enamored with pre-war Triumphs. After returning to Texas, they found one for sale and imported it.

Sabelhaus reported that the Triumph factory where the Gloria Southern Cross was manufactured was destroyed when the Germans bombed Coventry during World War II. The bombing destroyed parts and manufacturing plans, making it difficult today to secure replacement parts for the cars.

The most ambitious project to date has been a frame-up restoration of the TR3B, now finished in a shiny black with red leather interior.

“She has a lot of my money and three years of my life,” Sabelhaus declared. “It was very rough.”

The TR3 was manufactured from 1956-’63, undergoing a few modifications during that span. Sabelhaus noted that the car ran when they acquired it, but every time they went for a drive something malfunctioned, prompting the complete restoration.

“I decided to fix it, and before you knew it I had it all apart,” he said.

Although disassembling and reassembling a car appears daunting, the Murphy man pointed out that restoration was pretty intuitive if someone has some mechanical aptitude.

The couple has shown the TR3B across the United States and the car won first place in a Vintage Triumph Register show. Sabelhaus reported that they drive their cars to events within a radius of about 600 miles, but because the cars are  open top and small, they trailer the cars for longer distances to limit wear and tear on themselves.

“The thing is, these will wear you out,” Sabelhaus said.

The TR250 was manufactured only in 1968, making it one of the more rare Triumphs. Currently, the owner has the car apart for restoration.

“It’s got a long way to go,” he said. “This is what you do in your spare time between six and midnight.”

When the TR250 is completed, a TR4 sports car sits under a tarp waiting its time for a redo.

The couple is active in Red River Triumph Club that has about 120 members and 200 cars. The members gather regularly to talk cars, drive and to compete in rallye and autocross events.

Sabelhaus noted that Vicki is a proficient navigator for rallyes, plus she has been known to get time behind the wheel. He said that she also is a prime motivator to take one of the cars out of a drive on the weekend.

The Murphy resident serves as secretary for RRTC and also has been club president.

A lack of space at their home, which includes a detached garage/workshop, may cap the number of Triumphs in the couple’s collection, but you never know for sure.