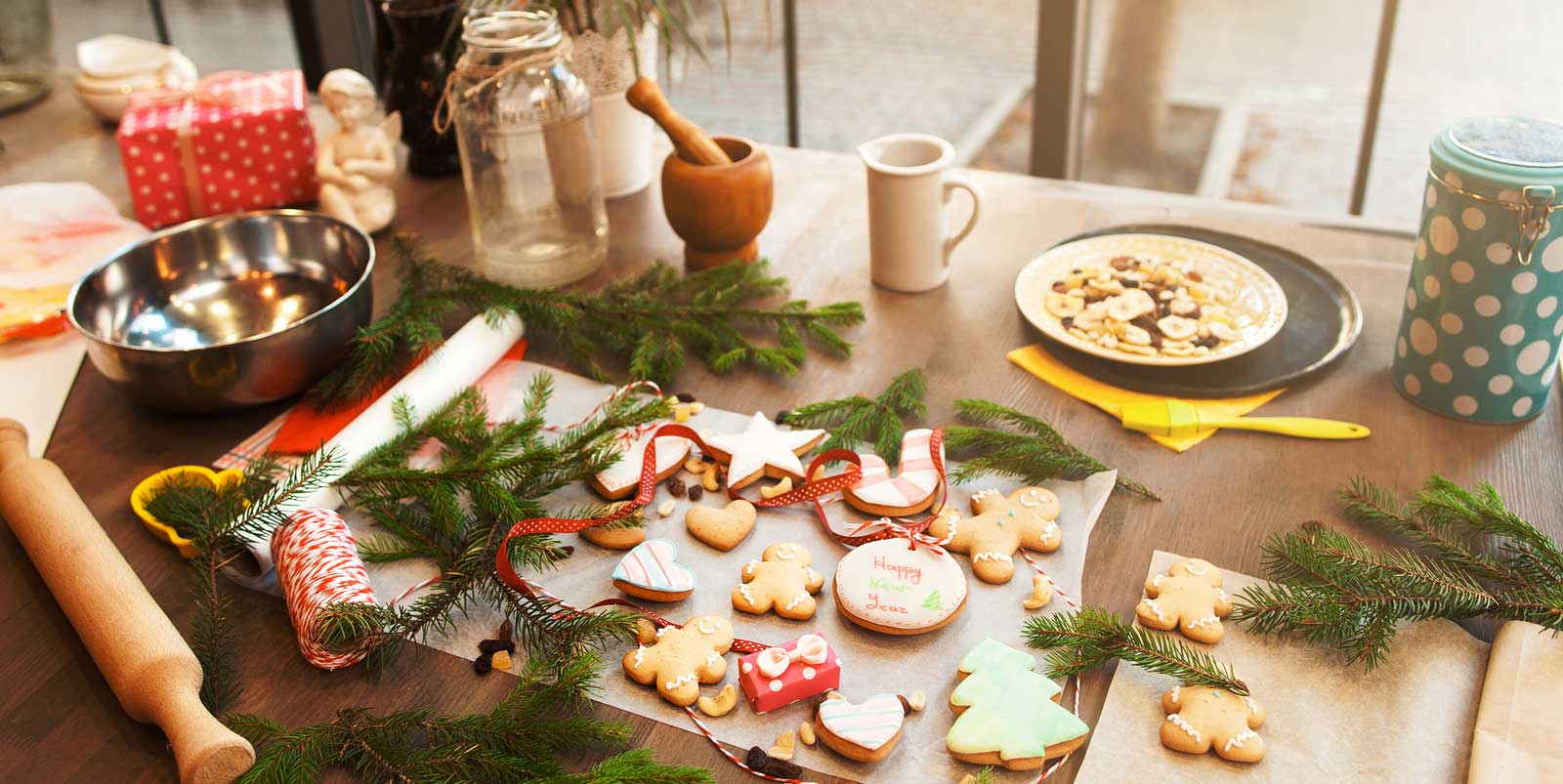 It’s the most wonderful time of the year, right, the holiday season? Few would argue with such a sentiment, yet have you ever stopped to ponder why that is? Is it the twinkle lights? The holiday tunes? The stacks of neatly-wrapped packages under a tree? For many it’s the role the original Christmas story plays in their faith. Still others may appreciate the sense of warmth and kindness that seems to sweep over even complete strangers around December 25th. But perhaps the most palpable magic of the holidays is how they bring family together, and what better way is there to bond with those you love, than over a great plate of food?

Here in Texas there is no one set of traditional holiday dishes, and it’s really no surprise. How could there be when the state is filled with people who have come from all over the world? With such a rich and diverse cultural background, it’s no wonder that many North Texans have made Christmas traditions all their own. Still the one thing uniting them all is food and family are what really makes the holidays special.

Linda Gauthier of McKinney is a first generation American, whose extended family hails from French Canada. “Both my parents were French Canadian, and they date back

to the first 200 settlers…my son is a 15th generation new world French Canadian.”

So when it comes time to celebrate the holidays, it’s no wonder that Gauthier leans heavily on traditional French Canadian cuisine, like the dishes that would be served up after Midnight Mass, as part of réveillon. “One of my favorites is the tourtière,” she said. “It’s a meat pie made with pork and a little bit of potato and a crust with allspice and garlic.”

The menu is extensive. “We also have ham, which we slow cook in the oven with a mustard, brown sugar and clove glaze. And a pork pâté, which is made with ground pork, cooked down with
onions and garlic, similar to the meat in the tourtière, but it’s cooked in chicken broth… chilled and served cold with toast or crackers. We have that for breakfast.”

The sides are French-style green beans, made with almonds and chicken broth. “And of course, mashed potatoes, with onions browned in butter. There is also brown gravy, the kind served on traditional poutine,” she said.

But what’s a Christmas meal without dessert? And for the Gauthiers, there are plenty of traditional and delectable dessert recipes from which to choose. “We also cook a soft sugar cookie… They’re really soft, and they’re so good. We decorate them on Christmas Eve.”

Gauthier claims they have the most famous Tarte au Sucré or sugar tart, which is a brown sugar pie made with eggs and cream. “I guess it’s like a pecan pie without the pecans. It’s very sweet and very good,” she said.

If that weren’t enough to satisfy a sweet tooth, they’ll sometimes add a molasses pie or a chÔmeur pudding (known as poor man’s pudding). They also make Sucre à la crème, which is a brown sugar fudge. “That’s a candy that’s traditional,” she said.

Though Gauthier grew up loving these traditional French Canadian foods, she has happily made some concessions since she has gotten married and started a family of her own. In fact, together she and her husband have created their own unique take on traditional Christmas foods. “I grew up having these dishes as a kid, and I shared them with my family. I married an American, so we’ve combined Southern Georgia cooking with French Canadian cooking for the holidays,” she said.

“We’ll do a traditional ham, with the maple, but we’ll incorporate sides like cornbread dressing and giblet gravy and pecan and pumpkin pie. We’ll incorporate green bean casserole, so we try to have a bite of everything that is culturally diverse in both families. We try to marry those together,” she said. The result? “It’s yummy!”

When asked if her son has now learned to make the same family dishes, she said, “They’re around and they watch… you’re not taught, you watch. And then you put that in your traditions,” she said. “My son has mastered the pork pâté, and the meat pie. And of course the crust has to be flaky, everything done through tradition. He’s done it very well. And hopefully he will pass that on to his daughter.”

For Farmersville’s Tami Becker it was back in Minnesota where she grew up, that she was first introduced to her family’s traditional Scandinavian Christmas recipes, many of which hail from the likes of Denmark, Sweden and Norway. “My great-great-grandparents came over from Denmark, so there is a lot of Norwegian, Swedish, and Scandinavian inspiration in the dishes,” she said.

“We make a lot of cookies, and there are some specific cookies that are Norwegian, even though we’re Danish. A lot of Scandinavians in the Minnesota area take to the Norwegian-type foods. The one we make is called lefse, it’s kind of like a tortilla, but it’s made with potatoes. And originally it was to eat something called lutefisk. My grandfather ate it with lutefisk at Christmas, but none of us will eat it. It’s a fish soaked in lye. So, what we do is make the lefse now; we just spread butter and brown sugar on it.”

“That’s always how my father and everybody has eaten it,” Becker said. “If you didn’t want to eat the lutefisk, you ate it with the butter and brown sugar.”

Though Becker’s family always made lefse, her grandmother passed away before she was able to learn to make it herself. “I didn’t even think about trying to make it myself as a kid, but when my dad got remarried his family made lefse and it was really fun to watch them, and to help,” Becker said. When she, her sister, and her dad moved to Texas, they found themselves missing the kind of lefse that had been so readily available in Minnesota. So, Becker decided to learn to make it herself.

“We talked about how much we really wanted lesfe, and I love to cook,” she said. “I decided it would be really fun to make it, since it wasn’t as readily available here in Texas. There in Minnesota you can buy it like tamales… It’s actually kind of funny, cause I grew up in Minnesota, but there’s a place in Plano called The Wooden Spoon, and she gives lefse lessons.” And so it was there, with the owner Gwen’s help, that Becker learned to make lefse.

“It takes a couple of days to make it, because you make the dough a night before.” In addition to time, a special pan and flipper are also required, plus a griddle that gets really hot – over 500 degrees – to make traditional lefse. Fortunately, for her, her dad gifted her the supplies, which became precisely the kind of gift that keeps on giving!

Of course, lefse isn’t the only thing on the menu for the Becker family each Christmas. “We have a whole list of things that we make at Christmas. We make a lot of different types of cookies, and this is all in the Becker baking list.”

In addition to sugar cookies and gingerbread, the Beckers also specialize in Cremkakao, which is a cookie that looks similar to a waffle cone. “We sprinkle it with powdered sugar, and eat it like that. That one’s actually really easy… We usually have them all through Christmas Eve and Christmas day. They go really fast, so we’ll be making those throughout the season,” she said. The family also makes spritz cookies. “It’s an almond cookie, that is usually green or red for Christmas, and we press it through a cookie press. A lot of times we make a wreath looking shape or a Christmas tree shape… and we usually put sprinkles on those!”

Luckily, Becker is able to enlist help with her holiday cooking. “I have three kids and they definitely help. It’s very labor intensive, making the dough and rolling it out, getting it on the griddle right and flipping it,” she said. “We’ve even had lefse parties where we make it. We have a big Christmas party, usually the day after Thanksgiving, and we invite people to come help… it reminds me of my grandparents and Minnesota in general.”

Their labor often results in anywhere from 50 to 100 lefses, which are each a little larger than a tortilla. They’ll eat many of them, as a family, but are also quick to give some to visitors to try.

For Wylie resident Lupita Ocampo, it’s not really Christmas until the smell of tamales starts to fill the yard. For as long as she can remember, she and her family have spent Christmas Eve busily working to create not just dozens but pounds and pounds of piping hot tamales.

Based on a family recipe that’s been passed down for generations, Ocampo and her husband and children have been warmly welcoming 35 or 40 family members and friends to their home for a decade now, all to help in the preparation of several delicious flavors of tamales each year. “This is it. This is our tradition now,” she said.

“My parents, my two sisters, their husbands and kids, a couple of aunts and their families and sometimes friends… it’s an all day ordeal.”

Most years, the family begins preparation around 5 a.m. by starting fires outside where they prepare the meats for the tamale fillings. They’ll then keep busy throughout the day shredding the meat, boiling peppers and painstakingly perfecting sauces… mixing cornmeal, and then finally putting all the components together to create tamales. “Maybe the first batches will be done around 6 or 7 in the evening… It’s a lot of work,” she said.

But that’s not to say it’s all toil and no fun. “It’s nice. And a lot of work,” Ocampo said, with a laugh. “It’s a lot of cooking. It’s a lot of cleaning… It’s a lot of fun. It’s something everyone looks forward to every year.”

That could be because while the family is making tamales, they’re also making memories. “The kids are running around and there’s music going, and the guys will help. We’re also baking in the kitchen. It’s fun… every one of our children looks forward to this day. They just love being part of this.”

In fact, many of the Ocampo’s relatives enjoy the tradition so much, they’ll actually come over early and make a long weekend of it, she said.

Since she was a young girl, Ocampo has helped with the preparation of Christmas tamales, first assisting her grandmother and later her mother, long before she began hosting the event. Even still, she is quick to point out that it is actually her mother who continues to “tell us exactly what to do.” “She watches and tastes everything,” she said, making sure that it is all just right. “It’s funny, because my mom and all her sisters, they all have the same recipe. But my mom’s are the best ones.”

Though Ocampo says her family may occasionally make tamales for other holidays or festivals, mostly they are savored as a special Christmas tradition. “Our tradition is to make them only once a year. As long as my parents are alive, this is what we’ll do.”