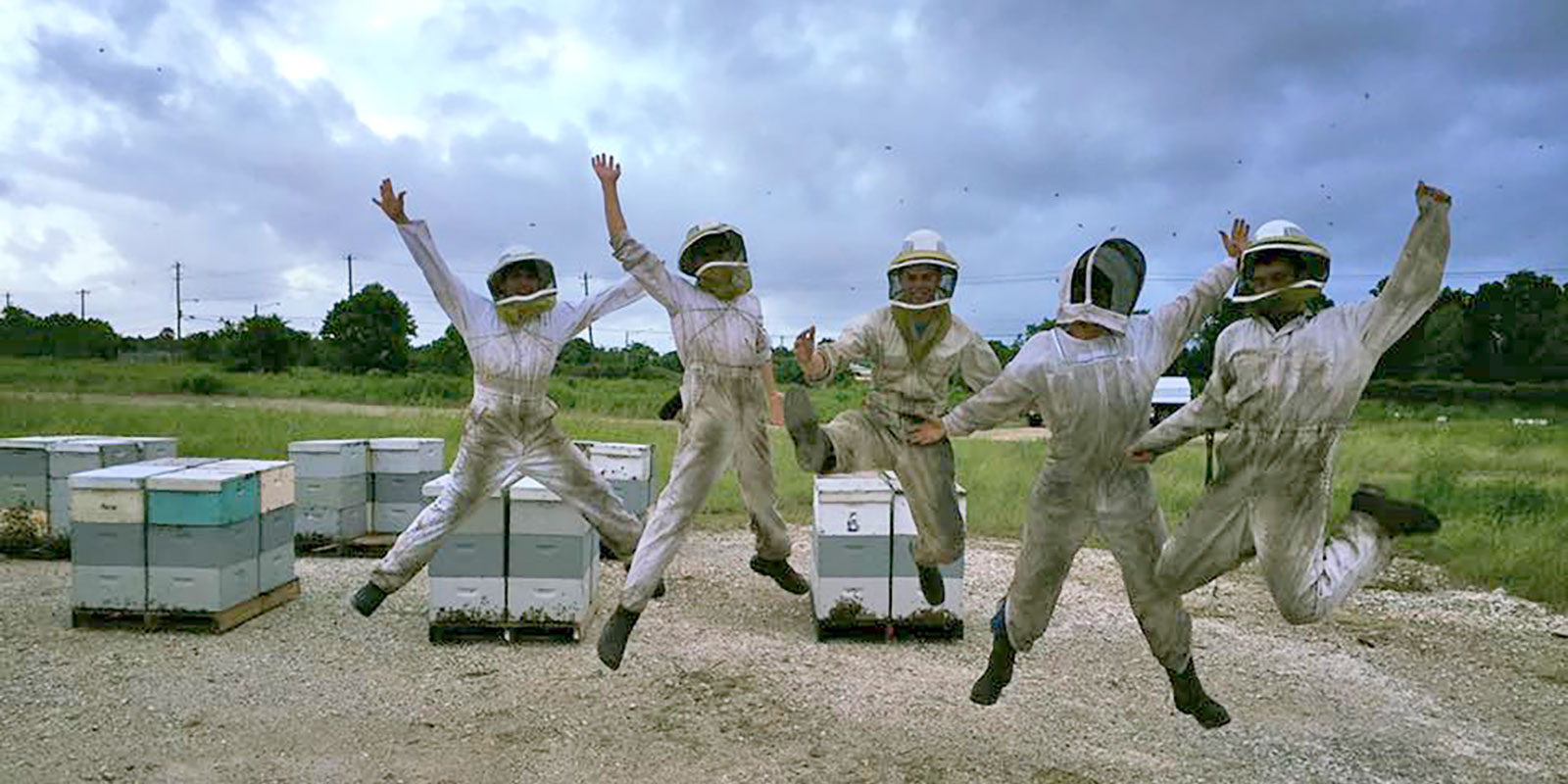 North Texas beekeepers function much like the hives they care for. The honeybees build community within their colonies to create sustainable systems that outlives each individual. Beekeepers across Collin County and beyond are doing the exact same thing in their industry.

For Sabine Creek’s John Talbert, building a beekeeping community began with his family. The trade was in his blood, as his grandfather was a beekeeper. John kept up the tradition many years, first as a hobbyist, then as a career. Thirty years ago, he and his late wife Lavada founded Sabine Creek in Josephine which he now runs with his son Skip.

Growing up, Skip did not think he would become a beekeeper. He was in high school when his dad started the business, and he wanted no part of it.

“I couldn’t get away fast enough,” he recalls, citing long workdays in the Texas heat and perpetual stinging as reasons for his disdain. “I was a bee-hater,” he emphasizes.

But something changed for Skip after returning home from the military. While working on his bachelor’s degree in business, he started using Sabine Creek as an opportunity to put his knowledge to work. Pretty soon, he fell in love with the bees, the industry, and the idea of carrying on the family business. His older sons had enjoyed working summers at the bee yard, and Skip liked collaborating with his father. He eventually took the leap and joined John full time. His older sons have since moved on, but his youngest son works with the bees when not in school. Even Skip’s 7-year-old daughter joins in on occasion.

As a team, John and Skip have spent countless hours raising awareness and generating interest about the world of beekeeping. Since 2000, Sabine Creek has hosted a five-session long beekeeping seminar that draws in quite a diverse crowd. Each year, nearly 100 people enroll in the course, and John says that he has had schoolteachers, lawyers, secret service agents and everyone in between pass through the course.

He believes that most people come into the class for the honey or the experience, but they stay invested because of the bees themselves.

“If you can see everything the honeybee can do, it just toggles your curiosity something terrible,” he says, humorously comparing the addiction and thrill to drugs. “You take that first step and you say, ‘oh that felt good,’ so you do some more. Next thing you know you get totally involved in it.”

That addictive element could be why nearly 1,000 people have gone through their seminars since they started.

While the classes helped attract new fans to beekeeping, the Talberts noticed that one demographic was still uninterested: young people. Skip recalls that when he started in the industry, most beekeepers were 60 years old or older. In an effort to ensure that the industry outlived their generations, John and Skip began plotting ways they could get the youth involved. In the early 2000s, they teamed up with the Collin County Honeybee Association (CCHBA) to develop two initiatives: the Collin County Honey Queen program and the Youth Scholarship.

The Honey Queen program is a local expression of a national initiative that has encouraged young women to get involved in the industry for decades. Most often, they become spokespeople for the industry, traveling around the state and educating the public on the importance of beekeeping and related environmental issues. Local winners have gone on to do great things including conducting innovative research and obtaining doctoral degrees. Others have become the state or national Honey Queen, allowing them to speak on national TV programs or presented in front of congress about the beekeeping industry. The current national Honey Queen came from Collin County.

The Youth Scholarship initiative has also brought young people into Collin County’s beekeeping community. Applicants must be between 12 and 17, and winners receive their own hive, bees, and everything else they need to harvest honey. Over the year long program, the student must attend monthly club meetings, conduct their own research, and present their findings to the club, which can run up to 200 members.

The scholarship had a particularly meaningful effect on Blake Shook, who won the scholarship when he was 12. He received his first beehive and has not looked back since.

“That changed my life,” he says. “It changed the direction of my career path and really, everything else.” Today, he owns and runs Desert Creek Honey and Texas Bee Supply, which provides beekeeping equipment to professionals and hobbyists across the nation.

Like Skip, Shook did not expect beekeeping to take up so much of his life. It started as a hobby, but he got hooked on the bees.

“Beekeeping is very addicting,” he confesses. “I was up to two or three hundred beehives by the time I graduated high school.”

Today, his commercial beekeeping operation includes more than 8,000 hives across multiple states but is headquartered in Blue Ridge.

Shook says that part of what fascinated him was the “limitless opportunity for experimentation and learning.” He sees beekeeping as a rare industry where one can learn for their entire career, and there will still be things they haven’t tried. This opportunity for learning and development has pushed Shook to conduct his own beekeeping classes and has even led to a unique partnership with the Collin County Sheriff’s Department.

Last year, the sheriff’s department contacted Texas Bee Supply about bringing in some hives and teaching inmates how to become beekeepers. A bee yard and flowers now sit in the fields behind the Collin County Detention Center where Shook and his team go weekly to train inmates so that they have a life skill and potential income source after serving time.

Part of what makes a program like this possible is that beekeeping, while still requiring a certain level of attention, actually takes minimal upkeep compared to other forms of livestock. More and more people across the country have caught onto this and have bought single hives for their backyards or gardens. This is where the beekeeping community extends even further, and a large community has become especially urgent because of rising death rates in bees and Colony Collapse Disorder – a bizarre phenomenon where honeybees just disappear from their colonies, leaving behind only their queen and perhaps a few others.

John says that part of the problem is that bees are delicate organisms and that new pathogens have made it more difficult to keep the bees alive. Shook explains that American beekeepers lost over 40% of their hives last year.

Finding the source of the problem has proven to be a complex issue.

“The latest research shows that there’s not any one issue causing it. It’s environmental issues. It’s parasites that harm the bees… It’s a lack of habitat for the bees,” Shook said.

This can have a trickled down effect in communities as fewer bees means less pollination which leads to less plant growth. Eventually this can even cause problems for production of foods like almonds, vanilla, apples or squash, all of which rely on pollination.

Making beekeeping more accessible to the general public is one solution as it allows for more safe habitats for the bees so they can continue to pollinate. Skip adds that planting more flowers and avoiding any genetically altered or non-native plants can also help sustain the ecosystem required for bees’ survival. Making these little changes is not just good for the bees; it is good for the world as well. Plus, a single hive can yield up to 50 pounds of honey, which sweetens the deal a bit for those who do decide to get one.

The expanding beekeeping community in Collin County and beyond may be able to create a more sustainable environment for the bees like they have created a sustainable industry. Not that long ago, Shook says that only a few beekeeper clubs existed in all of Texas. Today there are more than 50 with most of that growth happening within the last twenty years. The efforts of veterans like Talbert, Shook, and other beekeepers have helped create a thriving community. All sorts of people of various generations, in rural farms or urban backyards, all have one thing in common: a love for honeybees. That is enough to keep the community flourishing.

Filed Under: Latest, Local
Dinner Uncomplicated
Travel on the water