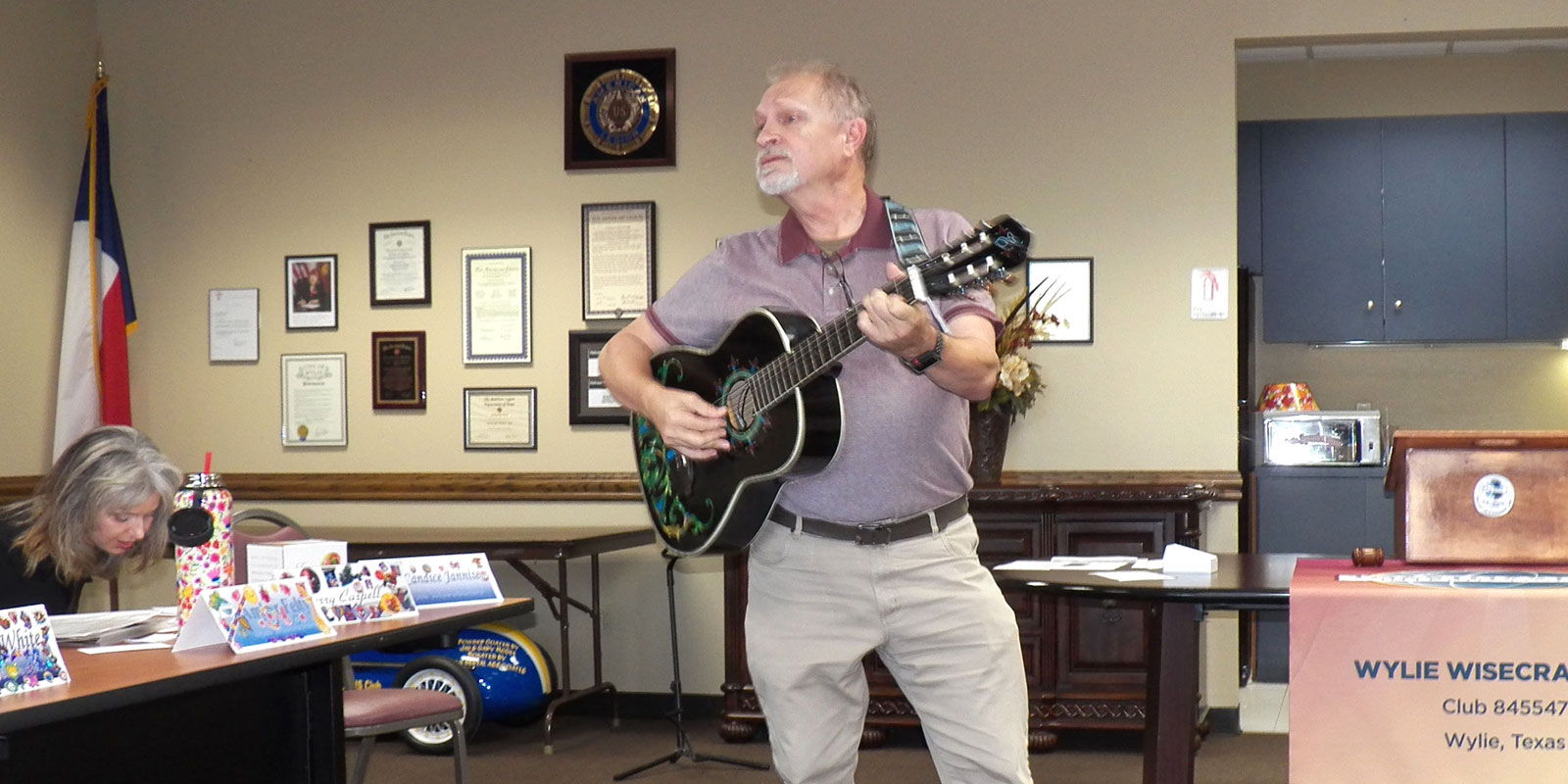 There could be singing. There might be dancing. And there will definitely be laughter.

Adults gathering at a bank or church basement to critique each other’s speeches may seem out of the comfort zone for some, but Toastmasters say it’s just a way to build confidence and hone skills to evolve into better leaders.

And here’s the kicker: It’s supposed to be out of your comfort zone.

“If you have an agenda other than learning how to speak and how to lead, you’re in the wrong place,” said Calvin Parker, president of the Wylie Wisecrackers. “We crack jokes, we act silly and I love it. We’ve got to be silly. You can’t always be serious because people will start leaving.”

Toastmasters is an international nonprofit educational service organization that operates similarly in each of its many districts nationwide. The group boasts more than 357,000 members across the globe and has more than 100 clubs just in the DFW area.

Its mission is to empower individuals to become more effective communicators and leaders.

“I joined Toastmasters to lead others to get out of their comfort zones and to become powerful voices with confidence in any venue,” Parker added. “Being a speaker, to me, is leading – not just trying to make money or hearing myself talk but to help others get out of their own way.”

Although some groups meet weekly and others meet bimonthly, they stick to a similar schedule. Each person is assigned a role for the meeting, which might include one of the following:

Toastmaster – master of ceremonies for the meeting. Introduces speakers and keeps the meeting running on schedule.

Table Topics Master – Helps members increase extemporaneous speaking skills by asking members to speak for one to two minutes about a surprise topic based on a theme selected.

Ah Counter/Grammarian – Records grammatical errors and unnecessary filler words (such as “ah” and “um”), which helps members become aware of poor speaking habits. A new word of the day is presented for the club to learn and use throughout the meeting.

Meetings last a little over an hour and dues are roughly $90 per year.

About 25 members have registered with the Wylie Wisecrackers, which meets at 7 p.m. Wednesdays at American National Bank, 301 Texas Highway 78, Wylie.

Gary Moore, vice-president of public relations for the Wisecrackers, joined the group when he moved to the area from Minnesota last year.

“We’re very inclusive, very receptive as a group,” he said. “We do a really good job of celebrating each other’s successes. The intent is to make people feel good about what they’ve done.”

“It’s not just the public speaking,” he explained. “What I like about Toastmasters is the leadership roles. You’re given some responsibilities pretty early on. It’s coming out of your comfort zone and learning to feel confident.”

If the Wisecrackers is not the club for you, there are dozens more within a 25-mile radius.

President Valerie Hope is a native of Panama and speaks Spanish as her first language.

“My goal was to have access to both languages,” she said. “Fiesta is the only club in the Dallas area that is bilingual. Toastmasters is most known for public speaking, and public speaking happens all the time. When you’re at the cash register, you say, ‘How’s your day?’ That’s public speaking. We want people to have the ability and confidence to express their thoughts, feelings and ideas in any situation.”

A typical meeting might include a roast, a toast or a “how-to” speech. In a recent Wisecrackers meeting, one speaker played guitar, another sang a cappella and a third used his belly button as a visual aid. Although guided by a regimented agenda, sometimes it seems there are no rules.

Speakers are buzzed – like in the board game “Taboo” – if they say “ah” or “um” too often, so the “Ah Counter” has to stay on his or her toes. In one meeting, impromptu speakers had to give brief talks on a particular year, based on the number engraved on quarters they were handed just seconds before they began speaking. At one Rockwall club, the “Ah Counter” squeezes a honking chicken, which alerts the speaker every time he or she uses a “waste word.” Speakers may be given the “Andrew Jackson award” (the former president’s face appears on the $20-dollar bill) if they use the same phrase more than 20 times.

“Listening skills also are enhanced,” Hope explained. “There’s so many ways people can grow as a leader and speaker, but also in being able to clarify and communicate ideas. It’s great fun, too. Everyone is there to develop and grow.”

Hope added that while she has a lot of experience speaking in public, she recently started her own company and no longer had access to corporate databases and talking points.

“I have to create my own,” she said. “I needed a structure to write the material I would be using and to test it and get feedback. Is it effective and can I do it in both languages? That’s been a great benefit.”

The best place to screw up

Nick Nichols was already a confident writer and speaker when he joined Toastmasters a couple of years ago. Now he’s president of the Toastmasters of Rockwall and has already earned the distinction of “Distinguished Toastmaster.”

“I wanted to have a sounding board to do public speaking and I wanted a friendly audience to test my content and delivery style,” Nichols said. “As I pursued the Toastmasters experience, I went through the ranks and was able to give 100 speeches over the past year. I went outside my club and joined a couple of other clubs and also became a district leader.”

Not everyone is that eager to get up in front of people, but, as Nichols pointed out, it’s good practice for anyone – a real estate agent, financial planner or car salesman.

“Success is based on your ability to get out in the world and communicate,” he said. “Toastmasters will help. It’s been said that Toastmasters is the best place to screw up. You have an audience that wants you to succeed.”

Gene Gray, vice-president of education for Toastmasters of Rockwall, has been in the organization for more than a decade.

“Even though I had been in sales for 30 years I had been introduced to Toastmasters back in the early ’90s and didn’t make time for it. Then my boss told me to do something outside of work that would benefit me. I’ve loved hearing other people’s stories and their struggles in communicating. It’s amazing to see the growth.”

Gray said there’s one thing in particular that has kept him coming back all these years.

“I think it’s fun,” he said. “You’ve got enough stress with your family, relationships and business. If this isn’t fun for you, don’t do it.”

Jerry Caspell joined a corporate club at his workplace, Cisco Systems, in 2006, and became a Wylie Wisecracker the following year. He’s now a Distinguished Toastmaster.

“After visiting the first meeting, I knew this was a place to enhance not only my speaking skills, but also my leadership skills,” he said.

“This has clearly helped me in my career path as a quality manager and in my personal life as well. Being involved in Toastmasters is by far the most life-enhancing endeavor I have ever been involved with.”

Moore, of the Wisecrackers, also offered high praise for the organization.

“Toastmasters, to me, was a Godsend,” he said. “I had just come off an extremely embarrassing public speaking attempt in front of 35 of my peers and I basically froze shortly into my speech because I had never done something like that before. I don’t even remember finishing the speech. It certainly wasn’t effective, that’s for sure. After this horrific experience, I was determined never to have this happen again and a friend mentioned trying out Toastmasters. I did and after following the ‘TM way,’ I overcame my fears and now feel very comfortable and confident in front of any size gathering.”

It’s not actually a “secret” word, since it’s written on a placard at the front of the room. But most Toastmasters groups incorporate a word of the day – recently a local club chose “joy” – and challenge those giving table topic speeches to incorporate the word into their delivery. Those who forgot to say the word would get a nudge from another member or a whisper of, “Did that bring you joy?”

Speakers assigned for the longer (four- to six-minute) speeches choose their own topics and write their own speeches – so preparation and crafting one’s words is also part of the process.

Members of each group represent different races, professions and socioeconomic backgrounds. Many would describe themselves as introverts.

Candice Jannise of the Wisecrackers group had a brain aneurysm, a blood transfusion, five brain surgeries, a seizure and a paralyzing stroke in 2004.

“The doctors said three times I would not live,” Jannise said.

Fifteen years later, she not only lives, she gives speeches in front of her peers and says Toastmasters has been a gift.

A very small and slightly timid Vietnamese woman – described as about 5 feet tall, barely 100 pounds – recently joined the Toastmasters of Rockwall. In her first speech, she giggled quite a bit, but began working with a mentor Toastmaster, who coached her and helped her improve. By the time she gave her second speech, the giggles decreased almost entirely, said Nick Nichols, the club president.

“She seemed a lot more confident,” he said. “I believe she achieved immediate results. It really just depends on how much you want to put into it and how serious you are. The more you speak, the more you learn, the better you’re going to be.”

A woman in the bilingual group does not speak Spanish.

“She was willing and able to learn,” said, Hope, the club president. “We don’t teach Spanish. In this case she had done some of her own work. She translates speeches and has a social vocabulary. This is not an experience for someone to learn a language but an opportunity to practice what you know. We have a gentleman who is a native Spanish speaker. He said his goal was to become more extroverted. At first, he would do quite a bit of poetry or recite things that he’s memorized. Now he’s actually offering more, raising his hand and volunteering to speak. His confidence has increased tons.”

The testimonials abound – and the seasoned Toastmasters are quick to remind newcomers that their clubs are a safe haven.

“If your heart starts to race and your hands are getting clammy at the potential of having to speak, that’s usually a telltale sign that Toastmasters is for you,” Hope said.

The critiques are positive and might include something like, “You could have elaborated more on your main points,” but mostly identify what the speaker did that was good. There’s also lots of applause, laughter and encouragement, which keeps members coming back.

“I joined Toastmasters because I had a terrifying fear of speaking in front of other people,” said Stephen Causey, vice-president of education for the Wisecrackers. “I learned that Toastmasters had so much more to offer than just overcoming a fear, and that’s why I stayed.”

And even if they don’t squeeze the word “joy” into every Toastmasters speech that is given, it’s certainly evident on the faces of the members.

“Learning and having fun are the most important goals for me,” Causey said.

Filed Under: Latest, Local
‘Tis the Season to Celebrate
Get crafty with homemade ornaments