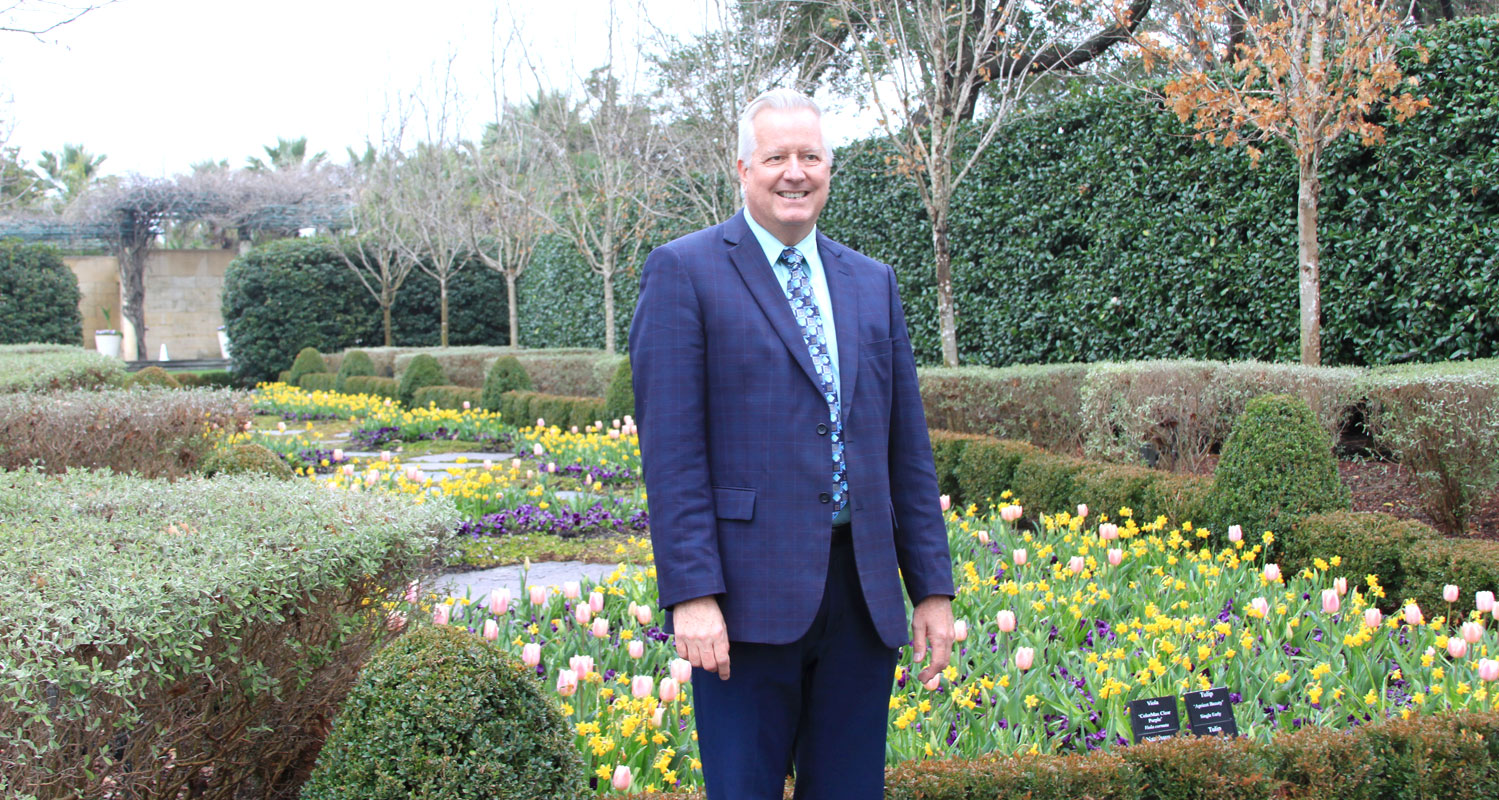 Dave Forehand has spent his entire career surrounded by beauty. Day after day for 34 years he has been behind the scenes, managing, planning and designing visual delights for the public to consume: Flowers, shrubs, bushes, trees, for all types of gardens and displays.

For the last 19 of those years, the shores of White Rock Lake and the gorgeous seasonal gardens on 66 acres have been the backdrop for his role as Vice President of the Dallas Arboretum and Botanical Garden.

It’s a career many people only dream of, but it was a chosen path from an early age. Forehand was one of the few 12-year-old boys growing up in Alabama who had his own greenhouse and played basketball and football. “I grew up in Alabama, you had to play sports,” he said. “Basketball was my passion along with plants.”

After majoring in Landscape Design and Ornamental Horticulture at Auburn University, his first foray into the botanical business landed him at Walt Disney World where he managed The Land Pavilion at Epcot.

He wound up at his second world class attraction in 2000 when Arboretum President and CEO Mary Jane Brineger hired him as the Director of Gardens.

Forehand and his wife Lynlee, a horticulturalist also employed by Disney, embraced the opportunity and packed up their three young children and moved from Florida to Murphy, TX.

As their family grew up in Texas, so did the Arboretum.

The public garden’s bucolic setting, and ample acreage, provided a slate of opportunity. When Forehand first came on board, there was no visitor building or the multitude of gardens and water features that make the Arboretum as special as it is today.

During his first year on staff, Forehand was heavily involved in developing the Master Plan. “What do you want your garden to be when it is fully developed?” was the key question he said they asked themselves during the process. In 2001 they completed a plan for the future.

“It took about a year to do the Master Plan and it was a 20-year plan,” he said. “Everybody had buy-in. We went through the Dallas Parks Board, Arboretum Board and Dallas City Council. That’s guided us all the way.”

The plan protects the Arboretum from doing something or accepting a donation that simply doesn’t fit their vision. It was updated five years ago, and future adjustments will account for the development of unused spaces and the extension of a tram path.

Forehand’s duties in the early years included managing and running the gardens from a horticulture standpoint but as in any nonprofit, he took on responsibilities including the custodial and IT department for a bit. “I learned about computers in those two years,” he said laughing. Today, his primary focus as Vice President is managing and developing the gardens, and public relations.

“Over the 20 years I have been here we have developed many, many new gardens – a world class children’s garden and we opened a new food and herb garden called A Tasteful Place,” he said.

The educational components of the newer exhibits at the Arboretum make it fun for all ages. The Rory Meyers Children’s Adventure Garden opened in September 2013. The 8-acre laboratory, with 17 interactive learning galleries, gardens, exploration center, science labs and more, offers plenty of hands-on educational opportunities for children.

“We worked on it for 8 years from the concept,” Forehand said.

The Arboretum hosts a variety of events in this area all centered around education and discovery. Visitors can taste samples made with in-season produce any time of the year.

Spring and Fall are two peak seasons for the Arboretum and for Forehand and the rest of the staff. Dallas Blooms, which runs from Feb. 23 – April 7 is considered the largest floral festival in the Southwest with over 100 varieties of spring bulbs, 500,000 tulips and more. The planning begins early, and the public events group and horticulture department collaborate so programming can be built around the theme. Activities at the Arboretum are year-round and include concerts, cooking demonstrations, a food and wine festival, and much more.

“The goal is to have the theme decided a year out so we have time to execute it,” he said.

The Arboretum is known as the top picnic spot in the Metroplex, making this year’s “Life’s a Picnic” theme for Blooms spot on. “It took about two weeks and 22,000 pansy plants to do the exhibit,” says Forehand. The exhibit features a massive picnic scene with a basket, blanket, vase of flowers, blueberry pie and two giant ants. “The actual frames are made by a steel contractor and the frame is stuffed with sphagnum moss which holds the plant material in place and retains moisture,” he said.

His plan worked. Today they have over 100 of the white blossom-covered trees – plus other types-and visitors only have 10 days to capture the beauty of his planned “cherry blossom show” in late March.

As one can imagine, Forehand and his team don’t let any grass grow under their feet. Once Blooms ends, the next exhibit is prepared. “We have a work service that sends us people to plant bulbs after the blooms festival is over,” he said. “It’s a pretty big moment and we want to get it turned over as fast as possible because it’s spring and people are still coming to the gardens.

The Arboretum staff totals around 150 people of which 50 are full-time horticulture staff. In addition, they employ part-time staffers for special projects/events. Despite the large staff, volunteers are essential. “We have horticulture volunteers that help with planning and the maintenance of the gardens,” he said. “They get about 100,000 volunteer hours.”

Starting April 15, “Celebrate the Children,” an art exhibition designed and created by artist Gary Lee Price, opens to the public. About 25 life size bronze sculptures of children will be displayed throughout the garden featuring kids doing cartwheels, flying kites and enjoying life outdoors.

While Dallas summers can be brutal, the Arboretum is still popular with Cool Thursdays concerts and other public and private events. Forehand said July and August presents its own set of challenges keeping plants looking fresh in the 100-degree heat, but he suggests if you are looking for heat-tolerant plants and live in North Texas, to visit and get ideas.

When planting flowers and bulbs in such massive quantities, one might wonder where the Arboretum gets all its plants. Forehand said they contract with growers for their bulbs and flowers but he ultimately had another plan. In December 2018, he realized a 20-year dream for the facility with the opening of a new horticultural center and greenhouses on eight acres at the Dallas/Mesquite border. The center will eventually produce about 60 percent of the gardens’ plant specimens.

Pumpkins, however, are not part of the plan. The pumpkins for Autumn at Arboretum come from Floydada in far west Texas each year. The annual event opens the third week of September.  “Planning for the Pumpkin Village usually starts in January or February and the display uses an average of 90,000 pumpkins yearly,” he said.

As an expert on all things Arboretum, and a natural educator, Forehand became the spokesperson for the facility six years ago. He’s often interviewed by T.V. stations and local publications, and if you frequent the Arboretum’s website or Facebook page, you can watch one of his Facebook “Live” chats or read his blog for landscape and design tips.

Given the fact that most of Forehand’s time and energy is spent at his 66-acre office, extensive gardening at his Murphy home is not a priority. He does, however, have many favorite plants and trees. “When we lived in Orlando I enjoyed growing different varieties of citrus. Right now, I like planting things in my yard that have more than one reason. It looks nice, but it also produces edible fruit. For example, I have pineapple guava and artichoke plants in my front yard.”

North Texas weather, plants, and some exhibits are not always compatible. The world renowned Chihuly glass exhibit in 2012 was no exception. Forehand said he was hosting 200 media representatives at a press event for the exhibit when a hailstorm hit the Lakewood area. “Dale (Chihuly) was only worried about one of his big sets of glass,” he said. “Everything else held up really well.” The VP said they would love to get the exhibit back but it takes a long lead time, about two years, and almost $2 million in funds, to prepare for it.

Attending meetings of the American Public Garden Association has afforded Forehand the opportunity to visit a majority of the premier gardens in the country and find some new favorites. Last summer, the association meeting was in Los Angeles. “I like Huntington Gardens in the hills north of LA,” he said. “The climate they have there and the types of plant materials they display is really unique and that’s really beautiful. The Butchart Gardens in Victoria, Canada are another favorite. It’s a display garden – they’re the closest thing to us (Arboretum).”

Traveling with Arboretum members is another perk, and responsibility, for Forehand. His children are now grown, and he finds himself in a different season of life much like some of his travelers. He surveys members to see where they want to go, then plans exotic, yet safe, locales. In June, he and some members will embark on a 10-day Oceania cruise to the Balkans from Copenhagen to Stockholm. Next, he’s planning a trip to Vietnam and Cambodia complete with a river cruise up the Mekong river. “It’s kind of a fun thing– it’s just all stuff I have to do,” he said smiling. “These are bucket list places. I have people that want to travel with me.”

Today, talent, teamwork and vision have transformed the former 22-acre Alex Camp House and DeGolyer Estate into one of the top botanical gardens in America. Over one million visitors from all 50 states and over 90 countries have walked on Arboretum paths to enjoy the flora, and some were probably welcomed by its very amicable vice president when he escapes his inside office. “I really enjoy meeting guests in gardens at the Dallas Arboretum,” he said.

The member roster extends way beyond the Metroplex to include members from South Texas, Arkansas, Oklahoma and Louisiana. “It’s a resource and treasure for everybody,” he said proudly. “This is the people’s garden here. People love us even from a distance.”