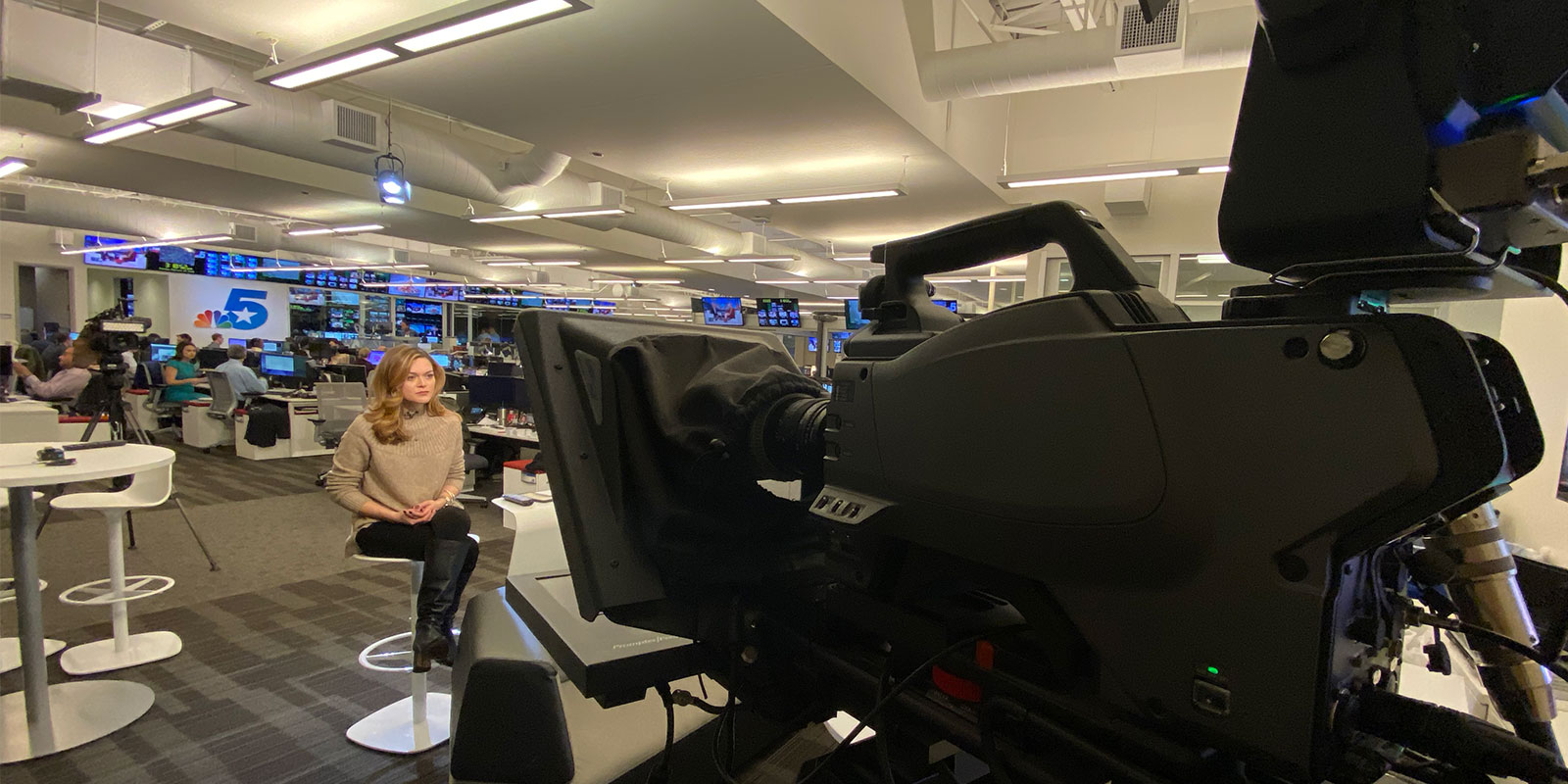 Reporters find joy in working in their home market

Allie Spillyards especially loved writing when she was growing up. Diana Zoga loved reading in her formative years.

Their love of those life skills only helped them when they became storytellers. The kind of storyteller that they pursued as careers – careers in television news.

Spillyards and Zoga work as reporters at KXAS Television-NBC5. They both have roots in Collin County  — Spillyards attended Wylie
High School, while Zoga attended Plano East High
School — and each woman joined the station in 2017 after putting in their time working in smaller markets before coming home to the Metroplex.

Spillyards was born and raised in Wylie and is a graduate of Wylie High School.

In her senior year, as graduation beckoned, Spillyards was deciding between careers. She loved writing and it had been a passion for her since
she was very young. In high school, she got some experi-
ence writing for the campus newspaper.

“I was interested by the visuals of TV and also had done a lot of performing arts in high school and felt like it married those two things for me,” she said about television news. “Once I learned about Mizzou (University of Missouri) and its program, I knew that’s where I wanted to go and it’s been the right decision.”

Zoga is a first-generation American whose parents are immigrants from Kosovo. She was born in New York — the family lived in Brooklyn — and then moved to Richardson when she was 6-years-old. She graduated from Plano East High School in 1999 and then graduated from the University of Texas at Austin in 2002. She majored in broadcast journalism.

She was in high school when the war in Kosovo broke out and recalls the stressful and intense times trying to find information about her relatives in Kosovo, as they were affected by the war.

“There’s a large and active Albanian community in North Texas,” she said. Because of that, Zoga said demonstrations were held in the area to get members of Congress to pay attention to what was happening in Kosovo.
“I was just a kid,” she said. “But I would participate, and I would help write speeches and sometimes I would invite the media and they would come, and I would talk to them.”

For Zoga, the experience sparked her interest and she discovered her vocation in life “was to be a journalist and a truth-teller by asking questions and giving a voice to people who maybe aren’t always given a voice.”

Following college, Zoga began her career in Sherman at KXII television and then worked at stations in Tulsa and St. Louis before heading back to Texas.

She was in St. Louis for nearly seven years, covering everything from city council to the shooting death of Michael Brown, which happened in 2014 in nearby Ferguson. She recalls that story being a defining moment in her career.

“That was a very memorable and life-altering and life-changing story to cover because it was in my community,” she said, adding it was a “really important moment for the country and more significantly it was an important for our local community. We live there and it was a story that we were committed to covering every single day, all day.”

As for Spillyards, following graduation from the University of Missouri, her career took her to Knoxville, Tenn., Charlotte, N.C., and Columbia, S.C.

As a reporter, Spillyards said she worked on many memorable stories before she arrived at Channel 5, but the story that stands out the most was in Columbia, where she spent months working on a story about people receiving exorbitant water bills.

“Through doing these stories, we were able to get the city to reform their system and to recognize there were issues going on — that these people didn’t really owe all that money,” she said. “And that’s always been very gratifying as a journalist when you can help people and actually bring about change through the stories you tell.”

Spillyards, a general assignment reporter, has been back in Texas since 2017 and says working for a TV station in her own backyard is a dream.

“I knew I wanted to do this before I left home, so I would, of course, watch the local stations and dream about possibly coming back home to be able to work for them,” she said.

John Stone, vice president of news at NBC5, said Spillyards has developed into one of the station’s most creative, hardworking reporters.

“She does a really good job kind of connecting the viewer to the emotion in a story, and I think one of her real strong points is that she really knows how to collaborate with her photojournalists in bringing stories to life – make them TV stories, even when the subject itself may not lend itself to TV in an obvious way,” he said. “She and her photographer always find a really creative solution to make a really compelling TV story.”

Zoga returned to North Texas in 2015, working first at Fox 4 and then the American Heart Association. When a job opportunity came up at NBC5, she said she couldn’t pass up the chance to report on the county where she grew up.

After covering Collin County for about three years, Zoga is now the consumer affairs reporter, the beat she has been on since November.

“She really cares about the viewer, she really fights for them, and she really wants to make sure that they have the knowledge they need to be able to take care of difficult situations and protect themselves,” Stone said.

Zoga went on maternity leave in late 2019, and then the pandemic interrupted her return to work plans. Her first day back from maternity leave was in her bedroom, reporting on stories, instead of reporting to the office.

“I remember a couple of days before just sort of Googling how to Zoom and just how to do my job without riding around in a car with a photographer and talking to people, so I would say that was the most memorable experience by far,” she said.

Work was intense and important, she said, as stories were about life and death and people’s livelihoods and folks not being able to access unemployment benefits.

“I just had to figure out how to get it done — no excuses,” she said, noting how TV reporters had to manage their jobs, such as explaining to sources how a Zoom communication works.

Reporters need to have multiple skills to work in television news, said Stone. They have to care about journalism, enjoy telling stories and be passionate about the business, because TV news is a difficult and demanding job, he added.

The vice president praised Spillyards and Zoga for the multiple skills they bring to the job. In addition, he says the fact that both have Collin County roots and are proud to report on communities they know makes them great assets to the newsroom.

“I can’t emphasize enough how happy we are to have both of them on the team,” he said.