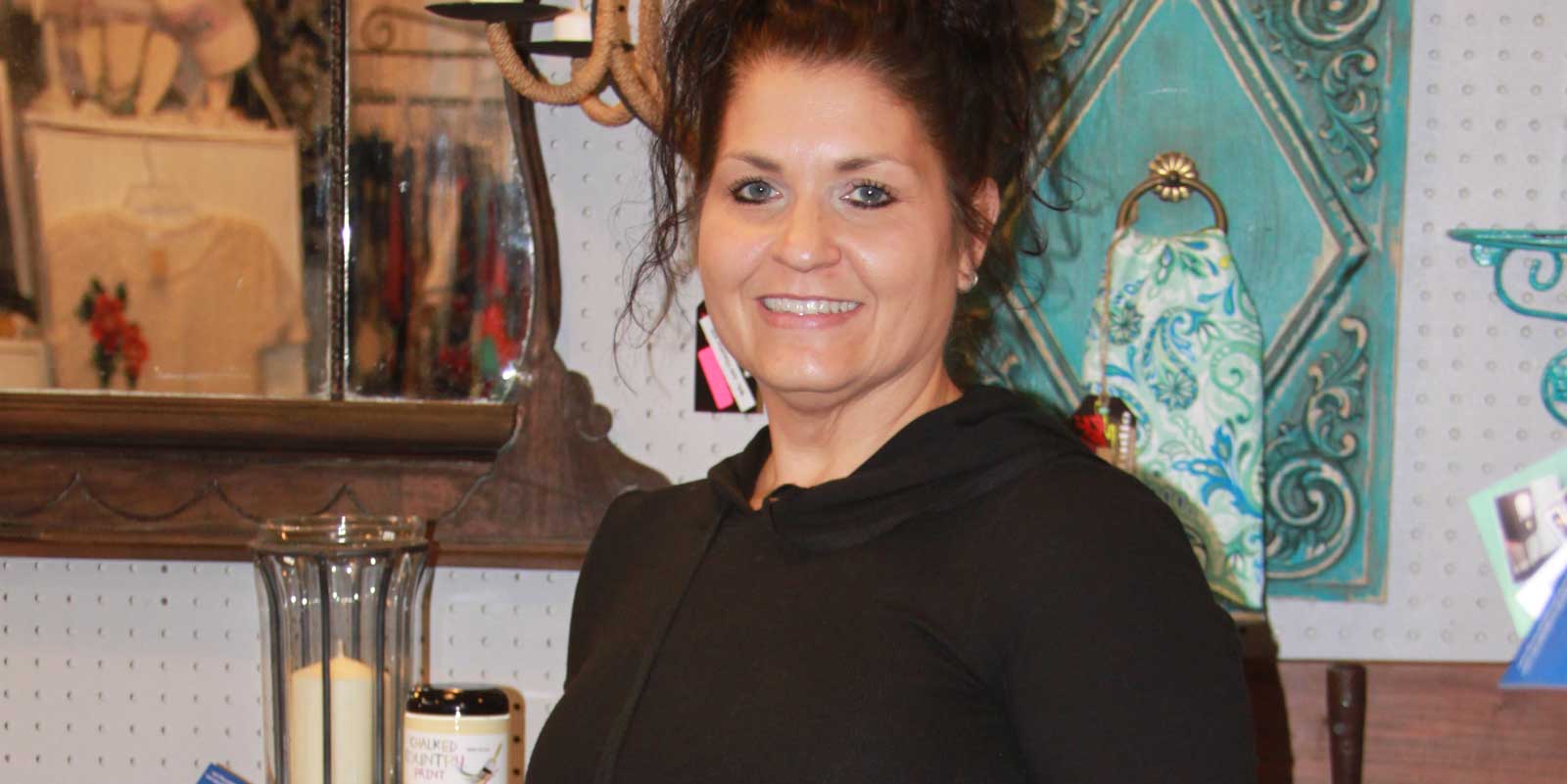 LaTonya McCormick knows a thing or two about transformation. As an artist she creates works of art using her God-given talent. As an art teacher for 25 years, she has taught students how to appreciate all mediums and to create something out of nothing. As a furniture restorer, she can transform trash into treasure. As a blogger, she features before and after transformations of her pieces, including her own physical transformation.

When her blood pressure could no longer be controlled by medication, a trip to the doctor proved to be the catalyst to jump-start LaTonya’s physical transformation five years ago.

She was just 47 years old and weighed 304 pounds. Her doctor insisted she renew her prescription in person. He didn’t mince words with her saying, “Here’s your script. I’m not going to talk to you about your weight. I’ll see you in the ER very soon with a stroke or a heart attack.” With that, he turned and walked out the door.

LaTonya was mad, but deep down she was angry with herself. She had failed to address her continued weight gain that started with the birth of her children 20 plus years ago.

Her first grandchild has just been born. She thought, “Oh my God I’m never going to live to see him grow up.”

Anger turned to determination to make a lifestyle change but first she had to know that Greg, her husband of 31 years, and 317 pounds himself, would accompany her on this journey.

“I told him I wanted us to grow old together,” she said. “He loves me that much.”

LaTonya and Greg chose weight loss surgery. They consulted with a bariatric doctor and began the process in May 2012. The duo even chose to have their Lap Band procedures on the same day, Oct. 26, 2012.

Because they were in this together, LaTonya and Greg supported each other as they adjusted to their new lifestyle. They followed the dietary restrictions to the letter knowing the risk of failure for that type of procedure is very high. “I don’t drink anything with fizz. I don’t eat rice, bread or pasta,” she said. In addition, LaTonya joined 24-hour Fitness in Murphy.

Two years after her procedure LaTonya started having complications from an over development  of scar tissue. “I had pain. It was hard to breathe.” The doctors performed a conversion from the Lap Band to the Gastric Sleeve. “There was so much scar tissue the doctor had to revise my stomach down to the size of my thumb,” she said. She had already lost 100 pounds and only needed to lose 50 more to reach her goal weight.

At the same time Greg was having some pain when he ate. He also decided to have the sleeve revision, and during his surgery, they discovered his liver had attached itself to the band. They removed the band and a small portion of his liver.

“Once the surgeries were complete, we both got to goal weight really fast,” she said.

Because it is very easy for her to gain weight, LaTonya is keenly aware of what she can and cannot eat. “I have to stay on top of it. I love the way I eat now. It fills me up and makes me happy knowing I’m satisfied but eating healthy. There is no pizza, no Jack-in the Box,” she said.

She’s obsessive about weighing in daily because that’s what keeps her on track. “When I see that number, I know the range I need to be. If I get too close to it I do more cardio or whatever it takes to get it (the weight) back down. Everyday I remember it. That’s what motivates me.”

The McCormicks have two children, Heather and Dallas, as well as their spouses and children, who have witnessed the hard work LaTonya and Greg put in to themselves to achieve their goals.

Heather is extremely proud of her mother and father. “It was cool for me to see them jump in and do something so challenging. When I got married seven years ago they were overweight and didn’t feel well – now they are like totally different people,” she said.

Her weight loss surgery not only helped her lose pounds, it inspired LaTonya to make a much-needed lifestyle change. Working out has replaced her food addiction. Monday through Friday she arrives at 24-hour Fitness in Murphy around 4 -4:30 a.m. and runs or walks three miles then goes back inside to do a class like body pump or cycle. “On the days of no classes I work out on weights with eight of the most amazing women,” she said. On Tuesday and Wednesday nights, she goes back for more classes.

She believes in exercise and it’s impact on her life so much she bought her kids memberships to the gym. “I just wanted my kids to see it. I also wanted them to know where it (food addiction) came from. Don’t let what somebody said to you when you were little eat you away as an adult,” she said.

After losing 158 pounds and working out, the extra skin was problematic and uncomfortable. As the weight came off, LaTonya said she would try to run but couldn’t because of the excess skin. She opted for a radical body lift. In May 2016 she had her first surgery to remove excess skin on her stomach and breasts followed by a leg and arm lift in November 2016. In May 2017, she had her upper back tightened and finished her lower 360 body lift. Her last surgery was not without complications after an allergy to the sutures and infection prolonged her recovery by a few extra months.

“Emotionally, the last surgery was the worst,” she said. “It started to get to me what I had been through. You just swell for so long. It takes about a year for your body to return where you don’t feel like you’ve had surgery.”

Despite the pain, she does not regret the money she spent on her surgeries. Some people buy cars. She bought a life transformation. “This allowed me to extend my life in a positive way. I wanted to invest in me.”

Never at loss for words, LaTonya doesn’t shy away from discussing her weight and surgeries and accepts no excuses from people who say it didn’t work for them. “I meet people all the time who say ‘I had the surgery and it just wasn’t successful for me.’ “You have to ask yourself ‘Did I do everything I could do for myself to maintain the surgery?’ The surgery is a tool, that’s all it is. Obesity to me is a disease. You can choose to get it in remission and keep it there, or it’s going to come back.”

In the early days of their marriage, LaTonya refinished items as a necessity due to a lack of funds. Her first project years ago was a bureau covered in contact paper for Heather’s room. She’s come a long way since then with hard work, and lots of paint. She repeatedly turns out Pinterest-worthy projects for her home and to sell at her space at Doc Holliday’s Emporium in Wylie, along with a line of chalk paint, gel stains and more.

Greg accompanies his wife on jaunts out of town almost every weekend to search for new finds to restore. They travel to garage sales, flea markets and estate sales, and she frequents an online auction site with a warehouse in Forney.

Like most collectors, she has a storage unit with items and she keeps projects in her spare bedrooms at home. If a piece needs repairing, Greg lends a hand with construction. Love and artistic touches are evident in each piece.

Her newfound life without excess weight inspired LaTonya to start a blog, bluehappyliving.com., two years ago. The purpose of her blog, she said, is to teach people to restore what you have. She shows people how to decorate their home on little to no budget. In her posts she describes each restored piece and how it came into her life showing before and after pictures of items she has brought back to life with chalk paint, stencils, embellishments and much more.

The blog is part of her transformation as well. She is honest about her failures and her successes as she posts pre and post weight loss pictures of herself and tells about her journey, her job at Wylie Prep, family and faith, and working out.

“If I could tell anyone one thing in life about what I’ve learned from this it would be no one can do this for you. Only you can want this bad enough to accomplish it.”

“I’m finally at peace with food and the power it had and can have over me. I’m just better equipped to handle it now. I’m in a better Blue Happy place with food.”