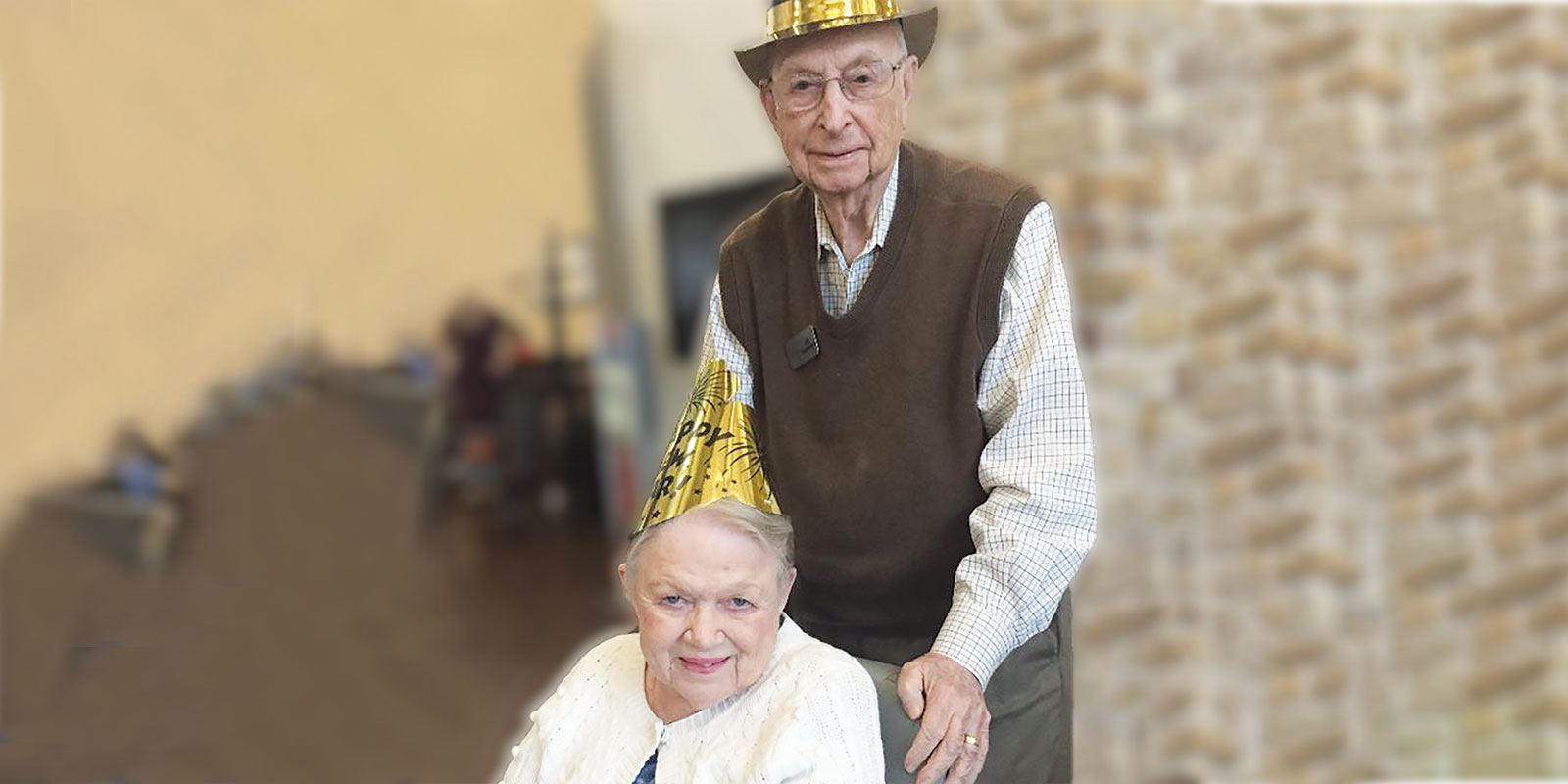 After seven decades of marriage, three children, nine grandchildren and one great grandchild, J.B. and Beryl Featherston, 92 and 89 respectively, know a thing or two about having a successful marriage.

While they both agree they never let the sun go down without reconciling, J.B. simply says, “You pick the right one to start with.”

Beryl Miller was a freshman and J.B. (known as Jimmy back then) was a senior at Hardin-Simmons University in Abilene when they met at a pre-college retreat in a campground south of Abilene in 1950.

and Beryl was walking along with her best friend and she was a striking blonde,” he said. “Both girls were happy and bouncing along and I thought ‘wow!’”

According to J.B., Beryl soon began to date another boy before he got around to ask her for a date. “So, I looked around and found another girl to date,” he said.

They both dated other people until Christmas break and when J.B. returned, he said the girl he was dating didn’t come back.

“She was from Sweetwater and apparently she had run into a former high school sweetheart who was on leave from the Navy,” he said. “She never called or wrote to let me know she wasn’t coming back.”

Around the same time, Beryl said she got mad at her boyfriend for not being very nice to her. In January, J.B. said he finally got the nerve to ask Beryl out and they dated off and on until April.

“I dated another girl intermittently while she (Beryl) was disposing of this other boy,” he said.

In mid-April, J.B. and Beryl decided to be exclusive.

As devout Christians, J.B. said he and Beryl were both “bathed in prayer from the beginning.”

“We’d always pray, ‘Lord lead me to the one you have for me,’” he said. “We trusted the Lord that he would do that so when we both felt we were falling in love, we concluded

it was the Lord leading us and it was the answer to our prayers.”

During the Easter holidays, they returned to their hometowns – J.B. to Wichita Falls and Beryl to Fort Worth – and decided they would think and pray about their relationship during the break. Upon their return, “if we felt like we loved each other we would say so and we did,” J.B. said.

After confessing their love, J.B. said about two or three weeks later they became engaged.

“So, when I asked her to marry me, she must have waited about a nanosecond,” he joked. “I said, ‘Beryl will you marry me?’ She replied, ‘Oh, yes! Jimmy.’”

J.B. graduated that spring and Beryl said she took summer classes to try and catch up. They planned to wait until she graduated to marry, but J.B. went off to Huntsville to teach school.

“His mother told him that wasn’t a good idea,” Beryl said. “She thought we should have more time and maybe we should have but we couldn’t put it off.”

That first year of marriage, outside his teaching position, J.B. was a part-time choir director and Beryl was his church pianist.

“We both had a love of music and love for the church,” he said. “Those two things have been pretty much the center of our lives.”

In 1952, J.B. was drafted into the Korean War. Their first child, James Barrett Jr. (Barry) was born two weeks before he was set to board the ship.

“We were going to Korea to fight but they signed the armistice about the same day I went up the gangplank,” he said. “So, we stopped in Japan and I had five months in Japan.”

Beryl went to live with his parents in Wichita Falls, and when J.B. returned, they decided to stay there and raise their family.

Since J.B. was not enamored with teaching as a profession, his father asked him to join his real estate business. Before long, J.B. said he carved out his own career as a real estate appraiser.

They had two more children; a daughter named Laurie and a son named Carter.

When Carter was old enough to go to school, Beryl went back to school and finished her teaching degree and became a teacher.

“She was an excellent teacher,” J.B. said.

In 1963, Beryl and J.B. joined five other couples and founded a Bible church called Grace Church in Wichita Falls.

“That was the highlight of our life,” he said.

Eventually, Dallas beckoned when J.B. got an opportunity to work for Merrill Lynch in their national real estate office. A few years later, he landed a position at a big accounting firm working as the national director for real estate operations. His work required extensive travel, he says, and after the kids left home, Beryl would often travel with him on appraisal assignments to ranches in the Panhandle, or to the courthouse to look up deeds and take notes on them.

“One day, I sent her to the courthouse to look up some things and she never returned,” he said. When he finally found her, “she was teaching the county clerk how to crochet.”

When asked about their biggest challenges as a couple, J.B. responded, “raising three teenagers is a challenge for anybody.”

“When I look back, I think we should have listened to them more and found out what they were thinking and what concerned them,” he added.

J.B.’s career success afforded them a nice lifestyle that included travel to many European countries as well as trips throughout South America when they were on a mission board.

Laurie said her parents bought a timeshare for several years so the entire family could get together each summer. “It offered a different state and different adventures in each trip,” she said.

In their 60s, the Featherstons retired to a golf course community near Palestine where they golfed every day; Beryl with the women and J.B. with the men. When they weren’t golfing, the couple had parties and were active in many church activities including singing in the choir.

For 24 years they had an active lifestyle until Beryl had a stroke in April 2018. After that, J.B. said he could no longer golf because he was too busy taking care of Beryl.

“We still miss it a lot because we have more friends there than anywhere now,” he said.

At Laurie’s suggestion, they moved to a senior living facility in McKinney where J.B. said it took a while to get adjusted to their new lifestyle.

“Then when the pandemic came, we had to stay in our room,” he said. “We couldn’t have any games, Bible study, couldn’t dine together – it was like being in jail.”

In June, they moved to Farmersville to live with Laurie and her husband so she could help with their care and give them the freedom they needed. She said her dad reads to her mom each night and greets her each morning saying, “Hello, my darling.”

Beryl doesn’t get around much these days, so she and J.B. spend time together listening to classical and gospel music, watching TV and reading.

Their travel adventures may have come to an end, but their devotion for each other has not.

“The Lord has been good to us,” he said.

Filed Under: Latest, Local
Plan before you shop for a wedding dress
Enchanting getaway