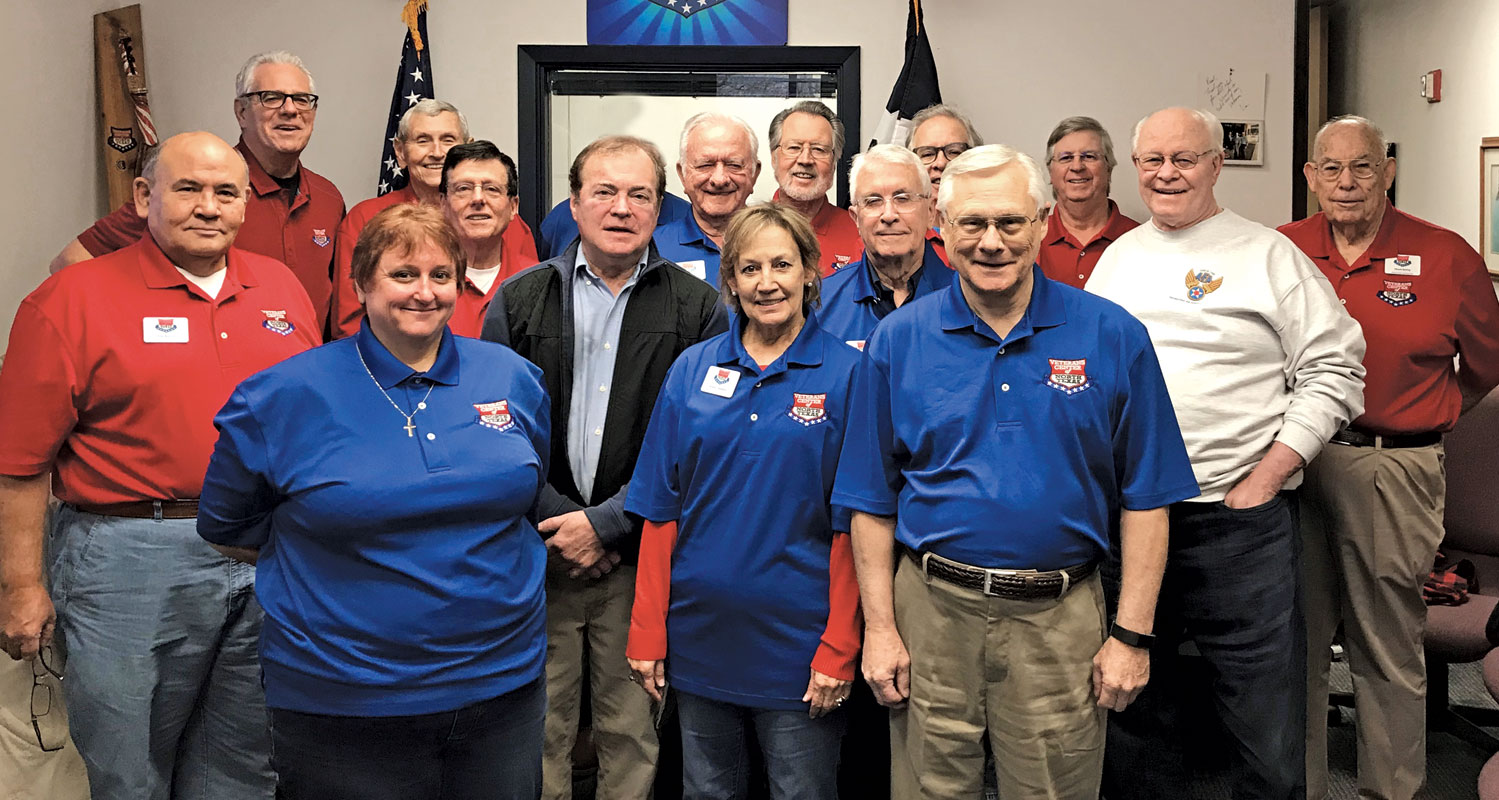 Helping veterans and their families get the services they need

Navigating the waters of veteran benefits can be confusing for many individuals, but for the staff at the Veterans Center of North Texas, it’s all just in a day’s work. For four years, the founders, Paul Hendricks, Dave Schafer and Pete Young, along with dedicated volunteers, have been helping veterans and their families in Collin, Grayson, Cooke, Fannin, Hunt and Rockwall Counties get the benefits they are entitled to and the services they need.

There are an estimated 58,000 veterans just in Collin County and 386,000 in the DFW area. The Center serves as an information referral center, and over the years, the men have talked to and vetted service providers accumulating a data base of over 150 partners including veteran and community organizations, local, county and state agencies, and Texas 2-1-1 information referral system.

As veterans themselves, all three men have experience earned through their respective twenty-year military careers, two Air Force and one Army, and lengthy careers in the private sector. Prior to launching the Veterans Center in 2014, the men visited other veteran agencies and the Bush Institute to find what was needed. They learned that two thirds of most veterans don’t know where to go to get services. “We knew there was help out there for veterans,” Young said. “We were thinking mainly of the Afghani and Iraqi veterans – and we know what they’re going to do – they’re going to get on the internet and look for a federal website – VA help. It didn’t exist. Texas had a website, but it wasn’t really efficient at the time.”

They make sure they don’t duplicate other organizations’ efforts, and if veterans cannot come to their office in Plano, they often travel to Sherman to help those in the area. County employees are in place to facilitate the official benefits request, then Center volunteers try to help people with anything they can, including helping with claims for the VA. “We would like to make every veteran aware of what’s available,” Hendricks said. “We try and counsel people what their responsibilities are when they take government funds.”

An estimated 3,000 people have benefitted from this service since its inception. Almost 100 veterans walk through the doors each month to receive help for a variety of issues. Over 1,000 veterans and families were served in 2017, and they are on track to serve over 1,000 in 2018. “We have the perfect storm,”

Shafer added. “We have dedicated volunteers. We have the right business model and we have an application that allows us to implement our business model.”

Operated and managed 100 percent by volunteers, they focus on providing service rather than fundraising to pay a staff. Hendricks prefers to keep the focus on serving the veterans, saying, “My motto is ‘if you do a good job, the money will follow.’”

They have low operating overhead at their modest space at 900 E. Park Blvd in Plano. Monies raised on North Texas Giving Day are the primary source of income that funds operations. This year, it was almost $20,000, which, according to Hendricks, is enough to keep going another year. “All our volunteers know exactly what our budget is, where the money is going and how we operate,” he said. “They all know we’re on a shoestring here.”

The average age the Center serves is 57, though they have served veterans from 22 up to 97. Most are Korean War and Vietnam veterans, and some are WWII veterans. One key issue is underemployment or unemployment. While veteran unemployment is about the same as non-veteran, many veterans over 50 are trying to find a good job. “We do a lot of job work – getting people back to work again,” he said. “Plus, we see a lot of age discrimination – it’s a real challenge to get people 50 and above jobs.” The $10-15 per hour jobs are not sufficient to put bread on the table, and Hendricks said many of them lack self-confidence. “These are good guys,” he said.

For those applying for jobs, volunteers are enlisted to write resumes, advise them on proper interview attire, find jobs, and much more.

Financial challenges are a common crisis they help with including pending evictions, unpaid utilities, funds for car repairs and such. Hendricks said they work hard to help veterans avoid evictions. “It’s like a felony, it follows you.” Young said a number of Vietnam vets are now trying to live on Social Security of $1,000 – $1,500 per month and it’s not working. “That’s really hard to live on unless you really plan it all out,” he said. Many don’t plan, and that’s when they come looking for help. Paul said he is trying to find a job for an 85-year-old man who is struggling to live on his $800 per month check.

The nonprofit does a financial assessment for veterans and has a volunteer who puts them through financial management training. This support enables veterans to achieve financial independence and learn how to develop and live within a budget. Whatever the case may be, Hendricks says they focus on accountability. “We find what is driving a person’s need. If they need money, we respect that need. We try to understand the full picture,” he said. “There’s always a story why they don’t have the money (which is a symptom) and we try and find out what the root of the problem is. After working with a veteran over several months, that problem goes away. We’ve been pretty effective at doing that.”

Above and beyond their daily operations, Hendricks has been investigating potential options for micro loans of $1,000 for people who have catastrophic situations, plus a car financing alternative for candidates with $500 per month extra income.

The Center participates in the Collin County Homeless Count each January and they put a veteran on every team. An average 14 percent of veterans are homeless and need immediate shelter. This is challenging, even partnering with local agencies. A future goal, said Hendricks, is to apply for a grant to use in crisis shelter situations such as putting a family in a hotel for a few nights.

Twenty percent of the cases they handle are women. Most often they involve custody battles, divorce, legal and domestic violence cases. In those situations, alliances have been formed with resources such as Hope’s Door, Agape and Emily’s Place.

The Center deals with myriad medical issues and disability claims. Mental illness or traumatic injuries can be a factor among veterans and it can compound all the issues they may be experiencing. Of all post 9/11 veterans, 38 percent are on disability, and so are 13-20 percent of those with PTSD or a brain injury.

The volunteers are acutely aware that the suicide rate for veterans is 20 – 22 per day and if they encounter anyone talking about it, they are immediately referred to 9-1-1.

Although medical care is offered through the VA, Young said they make sure Vietnam Veterans register for the Agent Orange test if they haven’t already done so. The VA website states, “Veterans who were exposed to Agent Orange or other herbicides during military service may be eligible for a variety of VA benefits, including disability compensation for diseases associated with exposure. Dependents and survivors may also be eligible for benefits.”

On the other end of the spectrum is dental care. Although veterans have VA health insurance benefits, finding affordable adequate dental care is a challenge. Hendricks, said one veteran in Wylie told him “he’s tired of pulling his own teeth.”  The Center continues to look for options for veterans including a special veteran dental event in McKinney November 12. “We are one of the most affluent counties and we can’t get them dental care,” Young said.

End of life preparation is another key area where veterans and families need assistance. Center volunteers can explain the benefits and to arrange a burial. All veterans can be buried at the Dallas-Fort Worth National Cemetery in Dallas. “A lot of people don’t prepare for end of life, and it’s not free,” Hendricks said.

He talked about a widow who visited the Center last year asking for help. She said her husband had died, he was in a mortuary, and if she didn’t give them more money they were going to kick him out. He called the funeral director and said, “Knock it off, we’re talking about a human being.” After that, they were able to work it out reasonably. The Center found the extra $500 to help the widow complete the preparations. She purchased a dented casket at a reduced rate, and the donation went toward transporting the body to the National Cemetery. “That experience, which was very traumatic for us, resulted in us forming a relationship with Dignity Funeral Homes,” Hendricks said. “It’s an association that will help veterans in a number of ways.”

What Hendricks, Shafer and Young have accomplished with the Center in four years and the extensive additional service activities they are each involved in, exemplifies their commitment to a lifetime of service.

“We’re doing this because we believe our veterans need help and we try and connect them with the people that can help them,” Shafer said.

Some volunteers such as Rolly Cannon have been with the group since day one. At this time, they have 24 volunteers, and would like to add six more. A commitment for at least four hours per week for six months is requested so they can count on them. “When you’re able to help a veteran, it’s so gratifying for a volunteer,” says Hendricks.

While retirement may beckon someday, for now the three founders plan to continue to volunteer full-time at the Center. “We are here 30-40 hours per week – each of us,” Hendricks said. “This is our business. This is what we do every day.”

• DART passes to get them to the VA • Blankets • Cash donations