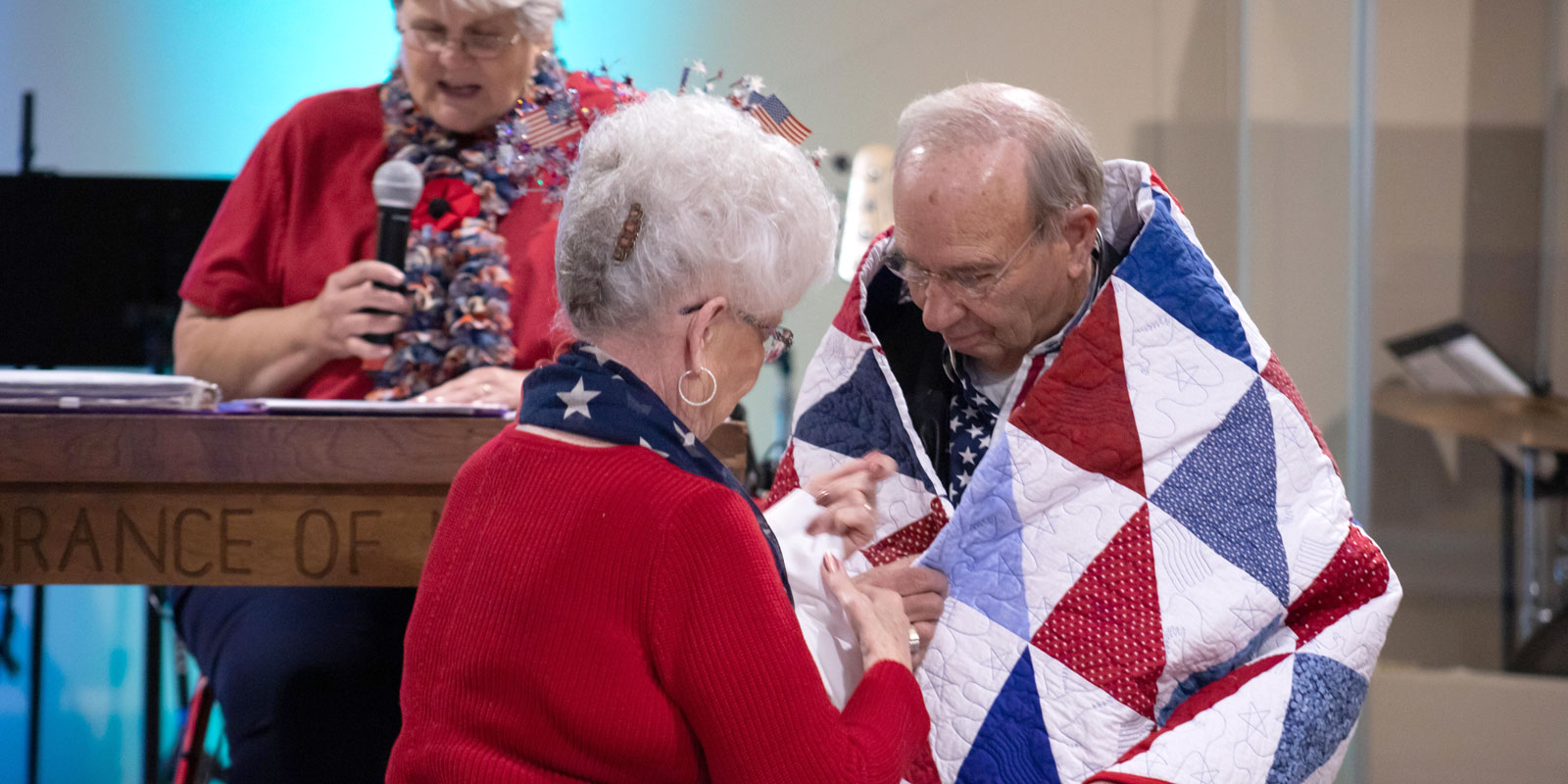 Quilting guild gives back to community

A  breast cancer survivor, a military mom and a retired teacher walk into the O.E. Carlisle Civic Center in Farmersville.

They don’t punch a clock; that’s just what the members of the Farmersville Quilt Guild do at 7 p.m. on the second Tuesday of each month.

They also get together occasionally on Thursdays for five-hour “sew days” and for special events on Saturdays. They like each other’s company, and they really like quilting.

The Farmersville Quilt Guild is about 35 members strong, and more than 20 show up for those Tuesday-evening gatherings at the civic center. Eight years ago, there were fewer than 10 members, so the women figure they must be doing something right. While most of the membership consists of

“We draw people from all around because we’re such a hands-on guild,” said member Donna Burns.

The women work on projects for Quilts of Valor and participate in the Texas Association of Quilt Guilds, Farmersville’s Old Time Saturday and the Wylie National Guard Armory’s Veterans Day Gala. Sometimes they provide a quilt to a family that’s been displaced by a fire, or someone suffering from an illness. They make caddies for senior citizens to attach to their walkers. They stitch pillowcases for Ryan’s Case for Smiles – an outreach program for children with cancer – and troops stationed overseas.

None of the quilts they prepare – which cost about $800 to make – are for sale.

Debi “JR” Paustian, said she looks forward to gathering with the women each month. They’ve become her friends. In fact, the nickname “JR” stands for “jelly roll,” a quilting term.

Some guild members have been quilting for decades; others just joined for the fellowship and are learning as they go.

“This makes my heart happy,” Paustian said at a recent gathering. “It’s teaching, learning and giving. I moved to Texas from southern California in 2011 and had some family here but no friends. I went to Old Time Saturday and found the guild booth. I’d never quilted before. I joined and made some lifelong friends – and because of them, I’m now a pretty good quilter.”

Kathy Wingo of Farmersville, a breast cancer survivor, is one of many generations of quilters in her family.

“When I was a little girl, I used to sit under my grandmother’s quilt as she was quilting and push her needle back up through the quilt,” Wingo said.

The women encourage each other.

As Wingo announced her upcoming chemotherapy treatments, noting that since the time she was 10 years old she has been “the flattest-chested person in the room,” her peers gave nods of encouragement and called out, “Best wishes!” and “Lots of prayers, y’all!”

Wingo said she’s found a sisterhood in the quilting guild.

“When I retired, I was looking for something to fill my time and allow me to give back to others,” she said after the October meeting. “I not only found that with the Farmersville Quilt Guild, but I found sisters – sisters who have your back and you have theirs. I love my quilting sisters, and together we are making a difference in the lives of others.”

“That’s absolutely gorgeous, Janice,” Paustian says to Janice Tower of Wylie, who is a member of the Farmersville Guild and another one in Garland. “That’s intense. That must have taken months to do.”

Member Elizabeth Andrus pointed out that a fellow member suffered a stroke and was brought into the quilting group by Paustian.

“She’d never sewed before,” Andrus said. “JR just took her under her wing, and she’d never stitched a day in her life. Now she’s made a Quilt of Valor.”

Members of the Farmersville Quilt Guild took a trip to Plano last year to present Congressman Sam Johnson with a Quilt of Valor they made.

Johnson is one of the few Texas members of congress who served in military combat, and the trip was one of many the ladies have embarked on over the years.

During almost three decades in U.S. Air Force, Johnson flew combat missions in the Korean and Vietnam Wars. He endured nearly seven years as a prisoner of war in Hanoi, including 42 months in solitary confinement.

Members of the guild draped the quilt around the congressman in a moving gesture of gratitude.

It’s one of dozens of presentations they’ve made, and one of the most rewarding things they do, Paustian said.

“Each one is different,” she said. “I get choked up just thinking about it. I went to one with my daughter and I had the information on my phone that I was going to read to the veteran. He was asleep, and my daughter grabbed his hand. I showed him the quilt and he sobbed. He went into his stories, day by day, of the war. I never even got to read the presentation. I didn’t need to. This is why we do what we do.”

A national Quilts of Valor sew day is held each February, where people across the country get together to work on their projects for those who have served in the military.

The Farmersville guild’s next Quilts of Valor presentation is planned for Nov. 12 at Faith Family Church in Nevada.

More than 230,000 quilts of valor, made by volunteers in all 50 states, have been awarded since the organization’s inception. More than 100 have been presented by the Farmersville guild.

A labor of love

The quilting ladies of Farmersville are prepared to embark on a “barn quilt trail,” along the Chaparral Trail. Such ventures already exist in Bonham, Nacogdoches and Fannin County, so the local group is doing research while working on their quilts.

The Farmersville group also assists with “Days for Girls,” which provides feminine hygiene products for young women across the world.

There’s really no shortage of opportunities to participate in the community, and many of the Farmersville guild members will say that’s why they chose this particular group.

The local quilt guild also is supporting the second annual Veterans Day Gala, set for 6 p.m. Nov. 9 at the Wylie National Guard Armory. The event is hosted by the First Lt. Robert F. Welch III Charity. Welch, who was killed in Afghanistan, is the son of “Gold Star mom” and Quilt Guild member Barb Welch.

The group describes itself in a mission statement as “a community of quilters from novice to the most experienced that share ideas, develop skills and encourage the tradition of quilt making through friendship, fellowship and learning.” Additionally, the group aims to “provide sharing and education in an encouraging environment where quilters can practice and exchange ideas, to educate, preserve and appreciate quilting in all forms and to provide service to those in need in the community through quilts.”

Filed Under: Champions, Latest
Brewski is beggin’ for a new home
‘Tis the Season to Celebrate