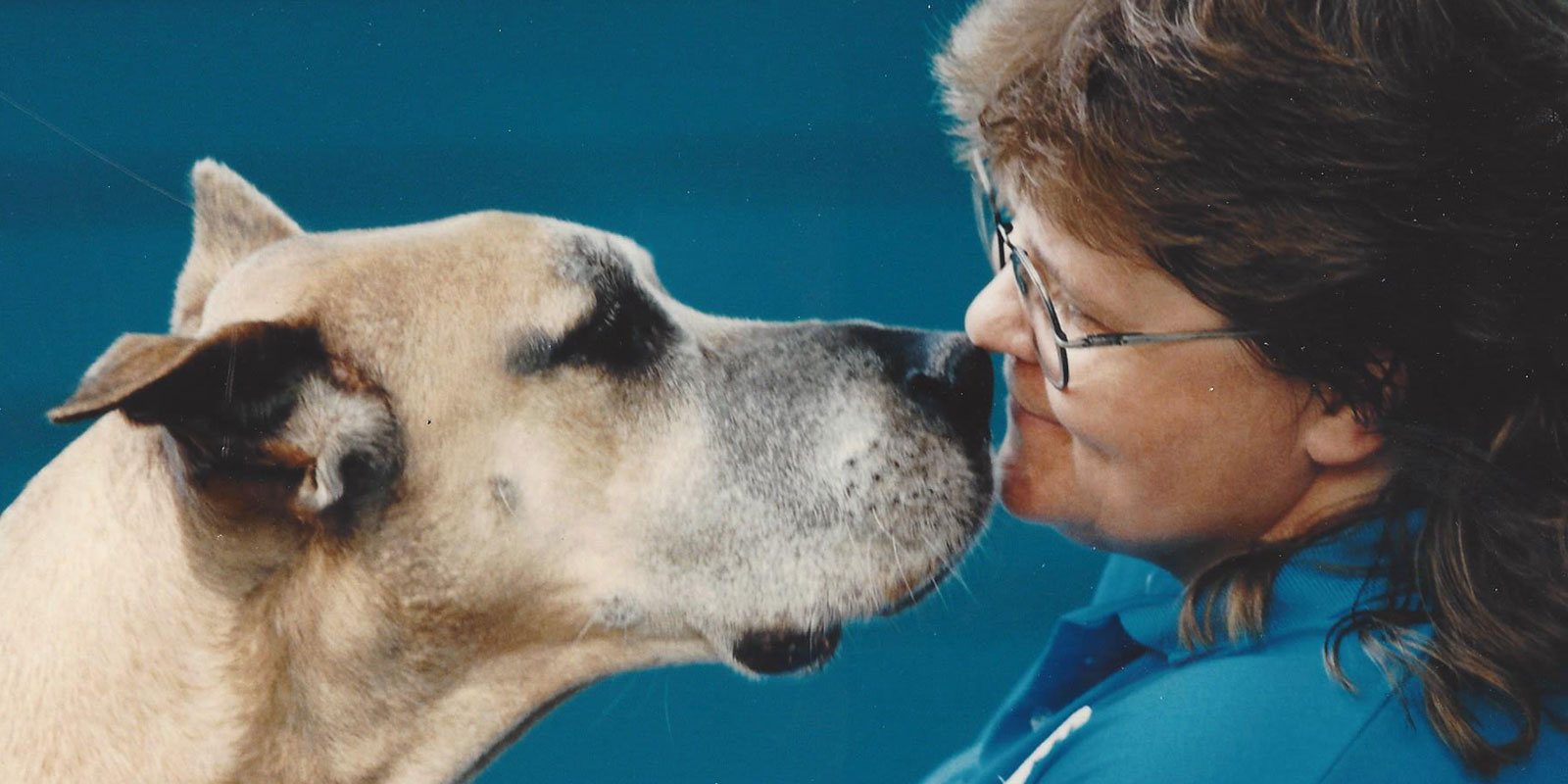 Helping people in need  one paw at a time

Imogene “Gene” Bush and her furry 4-legged companion named Besa are like a ray of sunshine on a cloudy day.

The duo enters Founders Plaza Nursing and Rehab in Wylie on a weekday morning ready to get to work spreading love and affection, and perhaps a little dog hair, around the facility. Bush and Besa are easily identifiable in their turquoise vests embroidered with their names and the name of the national nonprofit they are representing – Paws for Friendship.

They are accompanied by Bush’s younger sister, Irene Darrow, who acts as the chief treat handler and assistant.

It’s clear that many of the patients enjoy the visitors, and staff knows which ones are dog-friendly.

Founders Executive Director Karla Langston assigns her daughter Zaydee Vetter, a summer college intern, to supervise the visit. After checking in at the front desk, Bush and Besa greet residents Elwanda Brown and Janet Philley as they sit in the lobby area. Treats are handed to the women to give to Besa and she is quick to accept. The big, and well-fed, German Shepherd seems content sitting at their feet listening to conversation and perhaps getting a few extra kisses.

The next stop is the room of Herman Ward, a Korean War veteran with 42 years of Army and Air Force service, and his roommate Bill Rumenapp, a former Michigan dairy farmer. Both men welcome the opportunity to have visitors. Besa gives each man a sniff, lets them pet her, then places herself in front of Ward.

Bush goes out of her way to listen to the resident’s stories and ask how each person is feeling. Ward professes to feel better and perks up when asked about dogs he had in his youth. He reminisces about his family’s three hunting dogs, all Greyhounds, growing up in Oklahoma. Rumenapp’s dogs, he said, were of the Heinz 57 variety and his eyes light up as he recalls a story of a 3-legged beagle that rode shotgun on his tractor around the farm.

Soon another resident, Johnye Gray, wheels into the room on a mission to see Besa. Her joy at seeing the dog is evident. “She is beautiful,” Gray said of Besa. “I’m not afraid of the dogs because we had them when my children were growing up.”

The last stop that morning is the room of Coralee Hester, the director’s mother and Zaydee’s grandmother, who is rehabilitating at the facility. Hester greets the sisters like long lost friends and animated conversation ensues.

The visits are not timed, and although Besa is the star, residents like Hester soon become trusted friends and look forward to their visits.

Bush found comfort and companionship over the years from the many animals she owned.

After she lost her beloved German Shepherd, she didn’t want another dog for fear of getting too attached and enduring another loss.

“This woman loves animals more than any human being that’s ever breathed,” Darrow said.

Four years ago, a man found Besa and brought her to the Sachse Animal Shelter. She was in bad shape and had a broken leg, tumors, heartworm and was very thin. She was estimated to be around 6-10 years old. The man wanted her to live, so as a last-ditch effort he gave Terri O’Neal, shelter director, a check for $400 to save her and they did.

“She was such a good girl, Mary and I knew we had to save her,” O’Neal said. “Ms. Gene had just lost another German Shepherd and was heartbroken, so we called her to see if she was interested and the rest is history. Besa has become a superstar, at least to all of us.”

Besa, meaning kiss in Spanish, trusted the staff and gave them kisses even though she had been treated so badly. “She knew we were trying to help her,” O’Neal said.

After being contacted by the shelter, Bush resisted the idea of another dog but was convinced to stop by and walk Besa and spend some time caring for her at the facility. At day’s end O’Neal asked Bush to come back again offering her the opportunity to take the rescue home to spend the night. Bush made all sorts of excuses as to why it wouldn’t work but Darrow knew better and told them, “Just fill out the papers. She might as well sign them today. We’ll be back tomorrow.”

Bush picked Besa up the next day and they lived on Bush’s farm in Sachse for the next two years. Eventually her horse Nifty died and then Darrow’s husband passed away, prompting both women to sell their homes. Today they are next door neighbors at the Mansions in Wylie, a 55 and over apartment community.

After the move, the sisters quickly became involved in the Wylie Senior Center where Bush met Karen Flynt, Area Coordinator for Paws for Friendship at the time. Since moving to Wylie in 2015, Flynt spends the second and fourth Tuesdays of each month at the Sachse Library allowing kids to sit with her dog Greta while reading a book to her.

Flynt thought Bush should put Besa to the test to see if she’d qualify as a therapy dog for Paws for Friendship.

There are no formal classes or training: however, one of the main requirements is to see how the dogs interact with people and other dogs. Flynt evaluated Besa’s behavior on outings to PetSmart and then the nursing home.

A good therapy dog must have the disposition and obedient temperament to be around all types of people and owners must be willing to serve at least one time per month and produce a monthly report. All pets are certified and registered by the organizations’ founder, Jan Schmidt, along with the aid of the Area Coordinators.

Schmidt said she can tell in the first five minutes if people are sincere. “We do our own due diligence,” she said. “You can’t pull any games with senior citizens.”

Schmidt, a two-time cancer survivor, established the nonprofit 26 years ago in Omaha, Nebraska along with her dog Jennie, a Great Dane. Rescued as a puppy, both dog and owner had suffered greatly. After five years of being together, Jennie trusted Schmidt enough to give her the courage to return to the nursing home where her mother had lived, and died, to spread love to the residents. “I wanted to run away, she (Jennie) knew we had to stay,” says Schmidt.

Schmidt has since relocated to Tampa, Florida, and today Jennie’s legacy is carried on in the works that the founder and all her volunteers do. There are about 2,350 honorary and regular members from California to New Jersey.

Paws currently has six volunteers in Texas and Bush has recruited a seventh. As the new area coordinator, she has been busy working to certify Sachse resident and shelter employee Mary Bodine and her dog Brutus. Contrary to his name, Brutus is a lap dog, so Bush says he is perfect for the bed-ridden patients.

“He loves the attention and is such an asset for Paws,” she said.

Schmidt says they are incredibly blessed with outstanding members who love to share their precious babies – essentially becoming their designated drivers. The nonprofit does not employ any paid staff and volunteer visits focus on nursing homes, hospitals, schools and libraries.

When Bush and her sister aren’t busy taking trips with the Senior Center or visiting the nursing home with Besa, they are diligently networking to raise funds for the nonprofit so that Schmidt can continue her mission throughout the U.S.

“It’s such a wonderful organization,” Bush said. “No one really knows (what it’s like) until you take the dog to a nursing home and see the smiles on the people’s faces when you walk in. It’s really touching and makes you feel good – like maybe you’ve made a difference in someone’s life.”