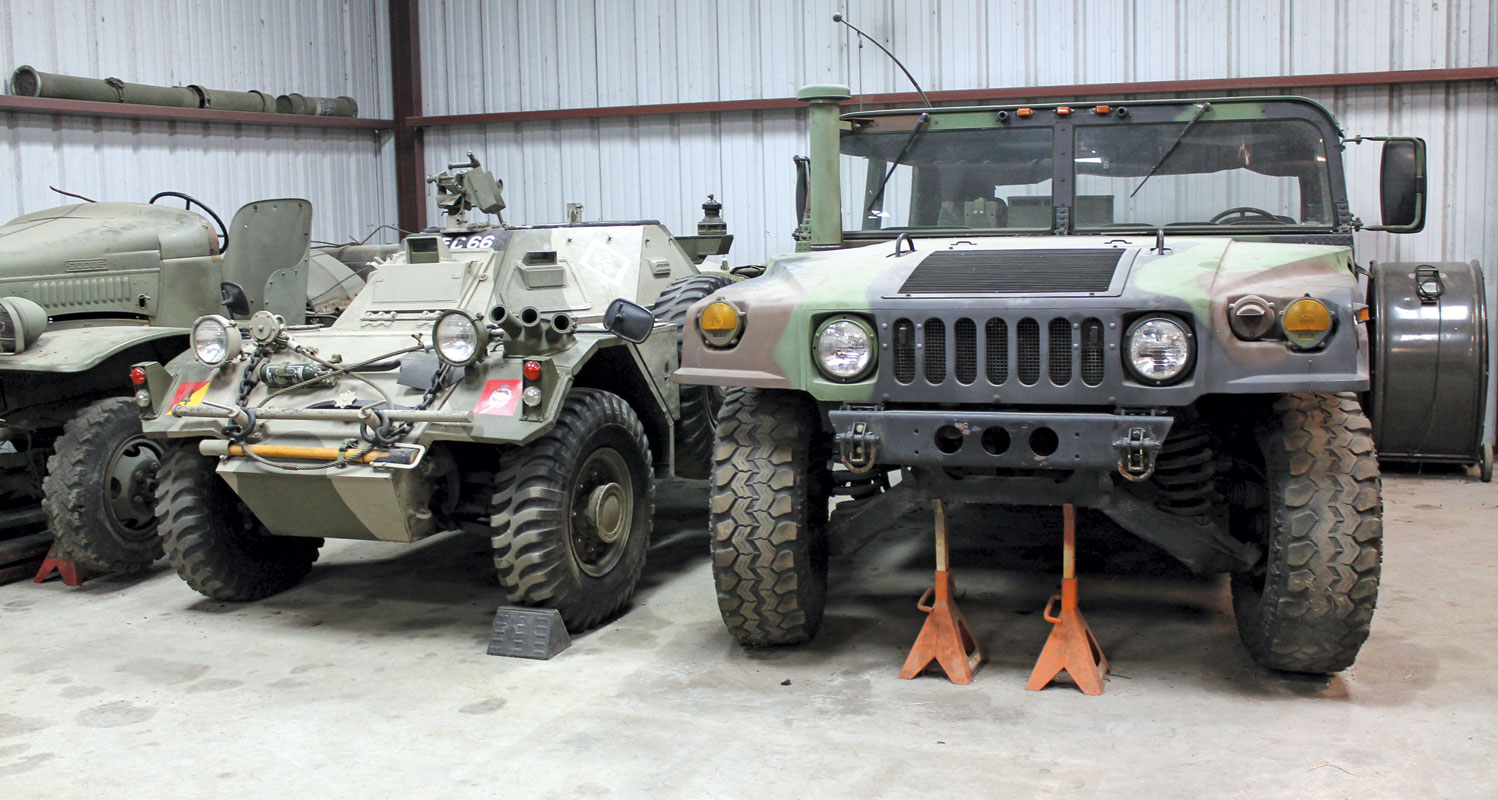 Visitors to the Military Heritage Collection of North Texas will come away pleasantly surprised and planning their next visit when they see the scope of artifacts displayed in four nondescript buildings, or if they take the opportunity to drive an armored vehicle.

The oldest artifact dates back to 1796 and the U.S.S. Constitution, “Old Ironsides,” and continues through today.

Museum curator Mark Witham reported that the museum has more than 2,800 pieces of art, more than 1,200 uniforms, about 20 military vehicles and hundreds of small arms.

A unique aspect of the museum is that guests often get the opportunity to fire some of the weapons and can drive an armored vehicle such as the Abbot, a British self-propelled gun on tracks, equipped with a 105-millimeter cannon.

“We restore all our artifacts and vehicles,” Witham said. “If it comes through the door, we find a way to fix it.”

The mobile collection contains jeeps, Humvees, heavy trucks, tracked vehicles and aircraft. The vehicles help the museum fund its operations through rentals for movies and documentaries.

One of the first items visitors view is a mural of Europe painted in 1951 by artist Eugene Savage as a guide to crafting a mosaic for the American Cemetery in Epinol, France. Savage designed the murals in the Hall of State at Fair Park in Dallas.

Witham pointed out that the mural depicts the entire allied invasion of southern France during World War II.

Near the mural is a display recognizing Medal of Honor recipients along with a flight suit and uniform worn by Col. Leo Thorsness who was awarded the MOH for his actions as a U.S. Air Force fighter pilot in Vietnam.

From the outside, the museum is a collection of metal buildings of no particular importance if you disregard the pieces of military armament and transportation. Inside is another story as visitors negotiate room after room, upstairs and downstairs.

“I like small galleries, when possible,” the curator said, explaining that smaller rooms provide what seems like a more private viewing experience.

One of the small galleries includes a collection of uniforms from Great Britain, including red ceremonial coats and a kilted Scots soldier. Witham joked that the location of the Great Britain gallery is to provide a dash of color, breaking up the olive drab and khaki colors of other areas in the museum.

The uniforms, as well as other artifacts, are provided largely by individuals or their families. A general thought is that the items would be more useful if they were displayed as part of a story, instead of being stored out of sight.

“The stories of the acquisitions are sometimes as interesting as the items,” the curator said.

For example, a pair of military uniforms, one from East Germany and the other from West Germany, were worn by two brothers separated by the Berlin Wall when it went up overnight in 1961. Witham noted that the family reunited and moved to Canada when the wall was torn down.

“A lot of people want to share history, but they don’t know how,” he said. “We have a way of telling other people’s stories.”

The museum is a nonprofit set up to provide a hands-on experience for visitors who can get close to the artifacts, which are not roped off from the public, and touch many of them.

“I’ve worked in museums all my life and wanted to get rid of the pretense,” Witham said. “I wanted people to feel like they can just sit.”

The curator is a native of London, England who served in the Royal Air Force for 12 years, then in the U.S. Army National Guard for eight years after immigrating to the United States in 1991. An engineer by trade, and a lifelong history buff, Witham opened the museum near Nevada about eight years ago after a back injury caused him to look around for a new calling.

He had been restoring military vehicles as a hobby, located property in rural Collin County and moved the vehicles and other artifacts to the site. Since then, the size of the collection has exploded.

The curator reported that the museum often receives unsolicited donations of artifacts, which they sift through to determine exactly what they have.

On one occasion, the museum received a padded envelope from Mexico that contained two Flying Tigers “blood chits.” A “blood chit” is an identification or rescue flag often sewn on the back of a flying jacket to facilitate assistance from allies when an aviator was shot down. The items mailed to the museum bore the image of a Chinese flag and the assistance message written in Chinese.

Witham said that they received a separate correspondence from Mexico about two weeks later, explaining the artifacts and to whom they had belonged.

An emphasis for Witham and museum staff is to make history interesting to youth. They host student tours and take their artifacts on the road for classroom presentations.

“You are not going to turn these kids into history lovers overnight,” he said. “You are fanning that little ember.”

Recently, about 70 ROTC students from Richardson not only visited, but also took over museum operations for a day. The curator reported that the students did a good job, in spite of some nervousness by the staff.

Museum staff consists of a corps of volunteers, which can range from 6-8 on a normal weekend to up to 40 for a special event such as a dinner. The museum hosts a number of military veteran events and will debut a new 8,000-square foot exhibits building on March 16 for an American Legion 100th Anniversary Dinner.

The museum is located at 20798 CR 590, Nevada, and open from 9 a.m. until 4 p.m. Thursday through Sunday. Admission to the museum is free. If visitors want to drive a tank or go on a tank ride, there is a $200 fee for driving and a $50 fee for the ride. All monies raised go toward construction of their new building and are tax deductible.

The museum subsists on donations and the curator pointed out that he does not solicit donations unless there is a real need.