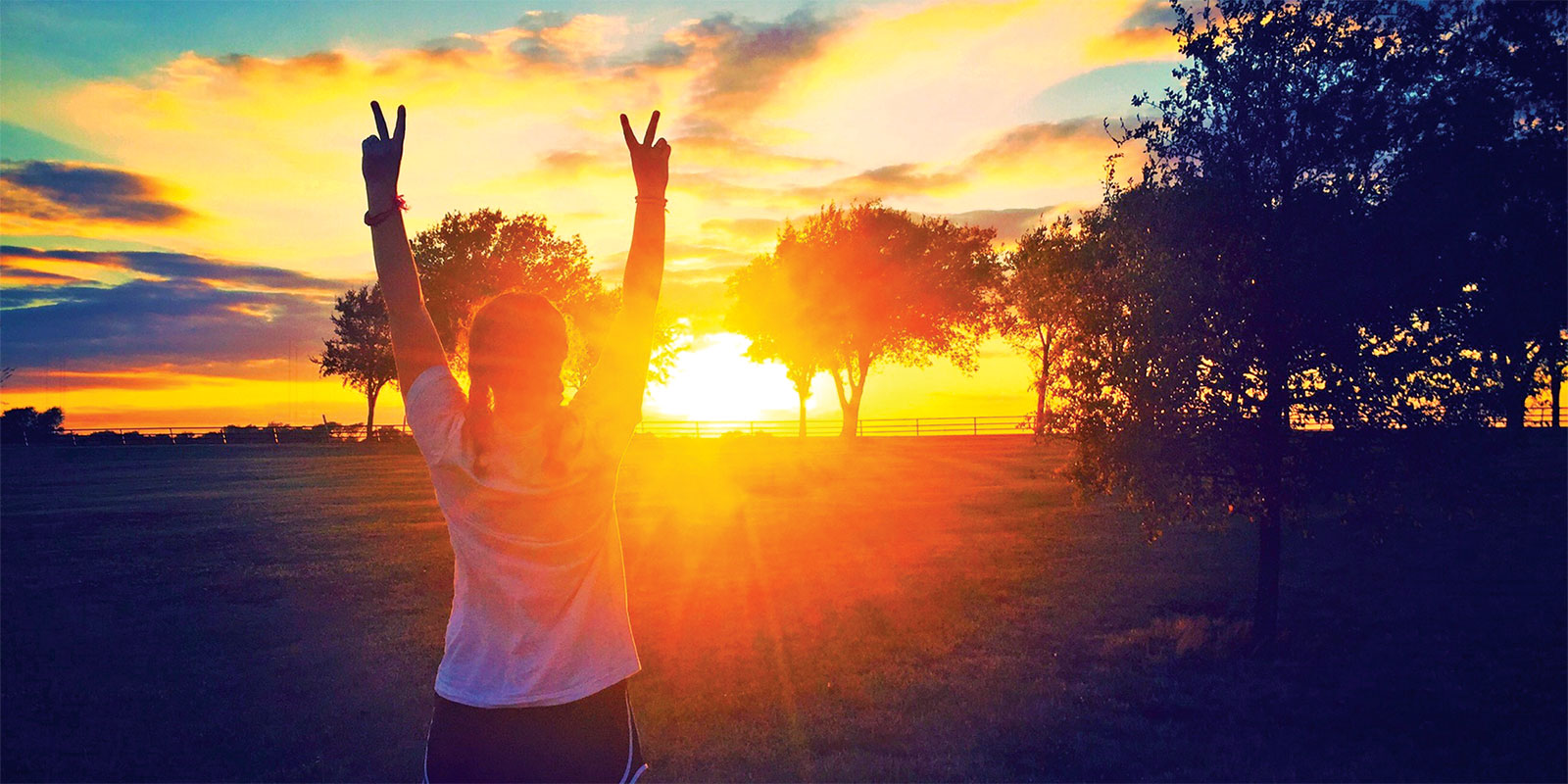 She was known as a leader, a gifted athlete, a true friend and an old soul who had an unwavering faith in God.

In an instant, Ally Hooten’s short, light-filled life was taken when she died tragically in an ATV accident January 7, 2017 at the age of 16.

In the days that followed, her heartbroken parents, Steve and Jana Hooten, planned Ally’s funeral while tending to their then 12-year-old daughter Sara who suffered critical injuries including a broken neck, broken leg and a concussion in the accident. Ally’s oldest sister Emma,18, was out of town the day she “lost her best friend,” says Jana.

Faith, along with family and friends, is what the couple said got them through those dark times.

“When everything happened the first thought (we had) is we’ve got to trust the Lord,” Steve said. “He wasn’t asleep the day of the accident.”

In the days that followed, a plan was formed to honor Ally’s memory and build a legacy so youth would be impacted by her leadership and love of Christ for years to come.

At the time of her death, Ally was a sophomore, Emma was a senior and Sara was in the 7th grade at Wylie Prep, a private Christian school.

“She was an athlete through and through,” Jana said. “She was known for her pearls she loved to wear but she could tear it up on the court.”

For students at Wylie Prep, the court didn’t and still doesn’t exist right now, so student athletes have to travel long distances to other facilities just to practice and compete.

“We’ve never had our own home gym,” Jana said. “So, we thought ‘What a better way to honor her than to be able to raise funds for something
that would benefit so many kids? So many kids that walk through the door will learn about the Lord, our faith and hear Ally’s story.”

Shortly after her death, multiple fundraisers were held in Ally’s honor by the school and by the Richardson Police Department where Steve worked. As a result, just two months after her death the Hootens formed Ally’s Legacy, a nonprofit focused on raising funds for a multi-purpose building on the grounds of Wylie Prep, and for other outreach ministries.

Shauna Shea, Ally’s former basketball coach, friend and mentor who is now Development Director for Wylie Prep, spearheaded much of the work and fundraising.

“She loved her and had kind of been wanting to see Ally’s memory stay alive,” Jana said. “The service projects, the gym, they’re all things that Ally would have wanted to see happen. That was just her. That was who she was.”

For Shea, the fundraising started right away and helped her cope with Ally’s loss.

“I really took on this role very organically,” Shea said. “I had multiple layers of relationships with her. I mentored with her, I was her basketball coach, she was good friends with my daughter. We were in each other’s lives a lot.”

One of the first things Ally’s Legacy sponsored was a mission trip to Belize where students served in an orphanage that helps save girls from sex slavery.

The ministry started in 2016 when Shea took 12 students, including Ally, on the mission trip. Shea says it was the first time Ally got to pray with somebody and lead them to Christ.

“After she passed away and we were getting ready to go that May (2017), people did give to Ally’s Legacy and we were able to do a lot (on the mission trip) that year,” she said.

In the fall of 2017, just nine months to the date of the accident, the school hosted a major fundraising dinner at Southfork Ranch in Parker with Willie and Sadie Robertson, father and daughter duo of the former Duck Dynasty TV show, as guests of honor.

Thanks to sponsorships and the gala, the donations poured in. Following the event, fundraising efforts continued for all parties involved until August 2018 when things hit rock bottom for the Hootens. At only 41 years old, Jana was diagnosed with breast cancer.

“When that happened, we were so stunned and so devasted,” she said. “It’s another time you feel like you’re kinda just going through the motions,” Jana said. “People say, ‘I don’t really understand how you still have faith.’”

Steve added, “I think everything we’ve been through– it forces you to trust the Lord. A lot of people say they trust the Lord, but they’ve never truly been through something that really tests their faith. I think that’s when you really learn what truly trusting the Lord is. It’s the first thing I think of when something like the accident happens and when Jana was diagnosed with cancer.”

On the Hooten’s end, fundraising efforts were paused as Jana focused on her treatments and getting her rest. Shea, however, continued to fundraise and do behind the scenes work at the school.

After six rounds of chemotherapy, surgery and radiation, Jana was declared cancer free in spring 2019. Shortly thereafter, she watched the Class of 2019 – Ally’s class – graduate.

“Watching all of them-that was hard,” she said.

For Shea, championing over two years of fundraising efforts had failed to yield the total amount needed for the building.

In March 2020, Wylie Prep, like all other schools, ceased in-person classes so plans were put on hold until August,   as they waited to see what happened with enrollment.

Thankfully, after a strong Fall 2020 start, Shea said they decided to look for other options to raise the remaining funds.

“We have the space. We have the architectural drawings. We have hired the contractor. We’ve done everything we can possibly do besides the last piece here,” she said. “It’s been a lot of legwork for the past three years of raising money. A huge part of the reason why we’re even going to be able to get the loan, and the percentage and all that stuff is because of the donations that have come in through Ally’s Legacy. We have the cash to be able to close the loan and to be able to handle the mortgage.”

In total, Ally’s Legacy raised around $750,000 for Building No. 22 – the new multipurpose building that will have the same number Ally wore on her uniform.

The school is in the process of ordering the metal building which will take 10-12 weeks to arrive, reported Shea. Then, once the building is delivered, it should take 6-7 months to construct. Wylie Prep hopes to break ground this spring with a big celebration which coincides with the school’s 20th year of ministry.

“We need to see this completed,” Jana said. “I’d love for it to happen while Sara is still there.”

For years, Shea said she wondered how to connect Ally’s Legacy and Wylie Prep because they’re really two separate things.

“There was a lot of confusion in the beginning,” she said. “It was hard for a while because people didn’t know whether they were giving to Wylie Prep or Ally’s Legacy. We were all grieving and didn’t know what we were doing.”

In an effort to keep Ally’s memory alive at Wylie Prep, Shea came up with the idea of Challenge 22 which represents Ally’s personality and honors one of the greatest things she loved about the athlete’s love of service.

“It didn’t matter the capacity,” she said. “She was the always the one to volunteer first. She loved it when people came together to do something.”

Starting this year, students and citizens from the community performed 22 service projects in Ally’s honor on January 7. As students completed projects here and in Southern Illinois where Jana has family, pictures were uploaded to a Facebook page called Ally’s Legacy. Wylie Prep students helped the elderly, served at local animal shelters and food banks, completed projects at the school’s campus, baked goods for local police and fire station workers and much more.

“It ended up being a great day,” Jana said. “It was really good for us. It started at the school and a lot of people from the community just showed up trying to do 22 different acts of kindness. We hope to continue this for years to come.”

One of the people former members of Ally’s class and her sister Emma visited on that day was Ally’s grandmother, Sue Hooten, who lives in Wylie. The group visited bearing gifts of Dr. Pepper and other goodies, along with hugs.

“I love this group of friends and I appreciate what they did for me today. They are special young people that I know Ally is so proud of. Thank you for honoring Ally in such a beautiful way. Thank you for what you did for everyone else. May God bless each one of you in a special way,” Sue commented on the Challenge 22 Facebook page.

Jana said Ally was really strong in her faith. “And while it’s been a horrific four years in so many ways, I guess that’s what’s sustained us through all of it but that is also what’s given us the drive to continue on.”

In the beginning, their daughter Sara’s injuries kept them busy following the accident, a fact which Steve says helped them a lot.

“We were able to shift our focus to that somewhat, and then I think once she recovered and didn’t need as much care, then the reality sunk in,” he said.

Steve compared the grieving process as being similar to multitasking.

The couple said the fact that their families all live in the area has been a lot of help.

“I look back on those times and I’m not even sure how we got through it,” Jana said.

For years the Hootens lived in Rowlett but they had always dreamed of moving to the country and in October 2020, they finally did.

“Everything we’ve gone through – we’re like let’s make that happen today,” Jana said of their decision to buy 40 acres in the northern part of Farmersville.

But the move represents so much more to their journey. They see the property as a place where they can minister to families who’ve lost a child or gone through cancer by offering a weekend getaway with fishing, campfires, horseback riding and more.

“We had some friends that stepped in, went camping with us, they really helped us a lot,” Steve said. “For us, in the beginning we found things were easier for us when we weren’t home,” Steve said. “At home everything reminds you of your situation – the missing person at the table, the memories.”

Jana echoed the sentiment. “Friends were probably a lifesaver for us –we could get away and cry if we wanted to and we could laugh too.”

But there’s hope after heartbreak.

On January 7 – like every year – Jana and Steve hugged Sara, celebrated her and told her it was her life day. Jana said they’re in the process of buying a horse for her and helping plan Emma’s April wedding.

“If we’ve learned anything – life is short,” Jana said. “We want to figure it out. We’re still working through it.”

Steve added, “We want to see want God wants us to do. That’s our goal.”