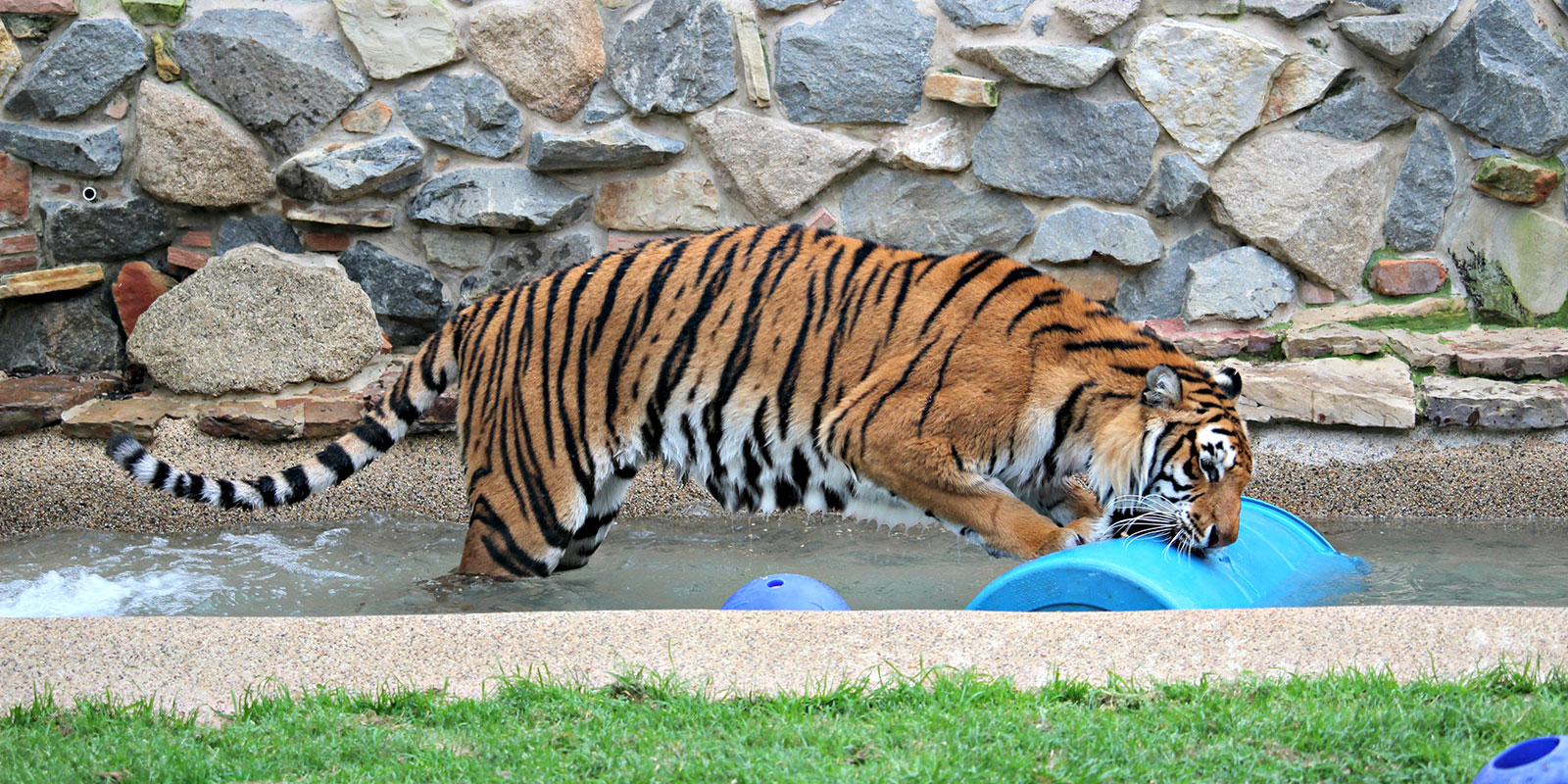 There’s a hidden gem in Collin County. A haven for the neglected, abused and the unwanted. It’s a place where lions roar, tigers play, cheetahs run, servals play and lemurs climb. To some, it might sound like a children’s book or a zoo, but no – it’s a rescue facility for exotic animals born in captivity called In-Sync Exotics.

Located in the quiet countryside just off Lake Lavon on Skyview Road in Northeast Wylie, the facility is home to 5 lions, 34 tigers, 8 cougars, 3 leopards, 2 cheetahs, 15 bobcats, 1 lynx, 3 servals, and 2 lemurs – a total of 73 exotics, all taken care of by founder Vicky Keahey and a staff of 13 keepers, 7 interns and over 120 volunteers.

It is the love and care Vicky and her crew give the animals that have earned In-Sync a reputation for being a top-notch facility.

The animals come from defunct zoos, collectors, breeding and entertainment facilities or the misguided few who think owning an exotic animal is like owning a cat or dog.

Her mission and her passion haven’t waned over the course of 20 years. The nonprofit is still active in rescue operations of exotic cats while providing optimal care for its residents.

In-Sync’s latest roaring tenants were added in March when Vicky agreed to take in two exotic big cats that were previously privately owned;

Zachariah, a 13-year-old male liger, the result of having bred a lion to a tiger, and Holiday, a 13-year-old white tiger. Zachariah had significant mobility and spinal issues, but with a good diet and lots of love, staff have already seen significant improvement in his mobility. Holiday had an issue with his right eye which has been temporarily fixed by their in-house veterinarian but requires a specialist to correct his eyelashes growing toward his eye.

“Both are doing great at In-Sync, learning all about toys, playgrounds, and the special treats like eggs, watermelon, and this fall, pumpkins,” Media Director Angela Culver said.

In 2019, In-Sync rescued six new cats that came from a variety of places, including private ownership and a sanctuary that was being closed due to disrepair. One of the animals was Whistler, a 12-year-old male cougar with atrial fibrillation (elevated heart rate). In coordination with a California hospital and a medical research, design and instruments company, Whistler now has an implant designed to continuously monitor his heart.

While there have been many rescues that clearly saved the lives of several big cats, a Fall 2016 rescue resonates with Vicky and staff. The nonprofit, in conjunction with Turpentine Creek Wildlife Refuge in Arkansas and Tigers in America, assisted with the largest big cat rescue – over 70 tigers – in U.S. history. As a result, multiple tigers, leopards, cougars, and two lemurs from a Colorado facility that shut down due to the owner’s health issues, now call In-Sync home.

Twenty-nine years ago, Vicky was a veterinary technician at a clinic in Wylie. She spent her days caring for, comforting and playing with a variety of animals where she worked. One day, a female cougar named Tahoe was brought to the clinic for treatment and an extended visit. When Tahoe’s owners never came to pick her up, Vicky said, “We knew she had been abandoned.”

The vet tech had forged a bond with the 18-month-old cougar that was now homeless, so she brought Tahoe to her 14-acre property near Lake Lavon she shared with her two children. Vicky built her first enclosure for the cougar and they lived quietly until 1994 when Texas Parks & Wildlife brought her a cougar they had confiscated. Keahey took in the ailing male cat and named him Ranger. Soon, he and Tahoe became happy companions.

In 1998, Keahey got her first tiger after finding out about a 3-week-old female Bengal tiger that belonged to a drive-thru zoo and was in desperate need of care. The tiger’s owners couldn’t give her adequate medical attention and felt she was no longer worth keeping so Vicky searched for a way to rescue her. She brought her home two weeks later, named her Kenya and worked on getting her healed. In just a matter of time, Vicky was back at the park and helped in the rescue operation and rehoming of 33 neglected tigers.

The experiences caring for the animals ultimately led Vicky to the idea of establishing a nonprofit organization dedicated to caring for rescued exotic felines bred in captivity.

In 2000, after filling out mountains of paperwork to apply for nonprofit status and earn USDA and Collin County approval, the vision came to fruition and In-Sync Exotics Wildlife Rescue & Educational Center was formed. That same year, Vicky met and married Eddie Keahey, the owner of an air conditioning and pipe fencing business, six weeks after she hired him to build an enclosure on her property.

By the couple’s first anniversary, In-Sync was home to 14 big cats. By their 10th, the population had grown to 50.

As president and CEO of the nonprofit, Vicky oversees a $1 million annual budget. Her $20,000 per year salary is equivalent to the cost of one month’s worth of food for the animals.

Eddie switched jobs in 2003 and his income as a Kansas City Railroad conductor pays the bills, says Vicky. In addition, he serves as vice president of the nonprofit and oversees construction on the property.

Under his watchful eye, every year, from 2000 to 2010, an enclosure, playground, or pools, have been either remodeled or built on the property. A visitor center was built in 2009 and an on-site veterinary clinic was completed in 2016 which necessitated the hiring of In-Sync’s first full-time veterinarian, Dr. Emily Wilson.

“He has built almost every enclosure for the rescues and installed the air conditioning on the vet clinic that was built in 2016,” she said.

There’s no escaping the call of the lions or work on a daily basis. The Keaheys live in a small house on the property just a few feet away from the animal enclosures. Vicky makes her way around the property in a golf cart, often calling out greetings by name to her wild “children” as she drives by.

Her own children, a son and a daughter, are now grown and married with children of their own. She has three grandchildren (and one on the way) who call her Grandma Tiger.

She does not have a definite succession plan but anticipates working at least another five years because she has four projects to complete at the facility.

Vicky says her current office, which is the size of a big bathroom, is shared with the commissary and break room. The new commissary, Kahn’s Kitchen, will hopefully be complete in the next three months. This will enable staff to store and prep the specialized diets for each cat. It will have a 40-by-25-foot freezer and a 20-by-25-foot walk-in cooler which should have ample room for the food deliveries which come monthly, every 6 weeks or every two months.

There’s no doubt that the COVID-19 pandemic has affected the nonprofit. Following shelter-in-place orders in March, the gates were closed to the public and the annual Easter Egg Hunt, a popular fundraiser, was cancelled.

Despite the closure, routines at In-Sync remained the same.

“Though the donations from visitors stopped, our staff and volunteers never did,” Culver said. “While being closed, we lost about $25,000 per month in admission donations and merchandise sales from our gift shop. This has been a lion-size financial hit to our operating budget.”

Like many nonprofits relying on the efforts of volunteers, the pandemic kept the high-risk or immunocompromised volunteers away.

“The staff and volunteers who are able to come out picked up the extra work,” Culver said. “Everyone has been supportive and willing to help, but it makes for long days and unfortunately energy reserves only last so long. We are interviewing for volunteers again, so hopefully, we’ll be able to get some new volunteers to help us as we continue to care for over 70 exotic cats.”

Aside from a big monthly food bill, office and cleaning supplies, as well as donations for vet care – especially for the multiple older big cats – can be very expensive. Funding for the nonprofit comes solely from donations, adoption programs, fundraising and an occasional private grant. The facility does not receive any federal monies.

“Our biggest fundraising day of the year, North Texas Giving Day, is coming up in September,” Culver said. This event is online, so we’re hoping to be able to raise vital funds for ongoing medical expenses and enclosures.”

Being open to visitors not only raises much-needed funds, it also provides an opportunity to educate citizens not only about why big cats raised in captivity cannot be released into the wild, but about the dangers of breeding and buying exotic cats.

The facility opened back up to the public Fridays through Sundays in May. Masks and distancing are required to protect not only the staff, volunteers, and visitors, but also the cats as they are susceptible to COVID-19.

They hosted the annual Watermelon Toss in July (by reservation only) and hope to offer the same opportunity for the Fall Festival and Pumpkin Toss and the Fowl Fling.

“We’re not seeing the same numbers as in previous years. Unfortunately, that makes things tougher for a lot of nonprofits like ours,” Culver said.

After two decades of adversity and heartbreak rescuing exotic cats, Vicky is optimistic.

“All we can do is keep on plugging along and have faith that God doesn’t bring us more than what we can handle!”

Filed Under: Champions, Latest
Dinner Uncomplicated
Travel on the water