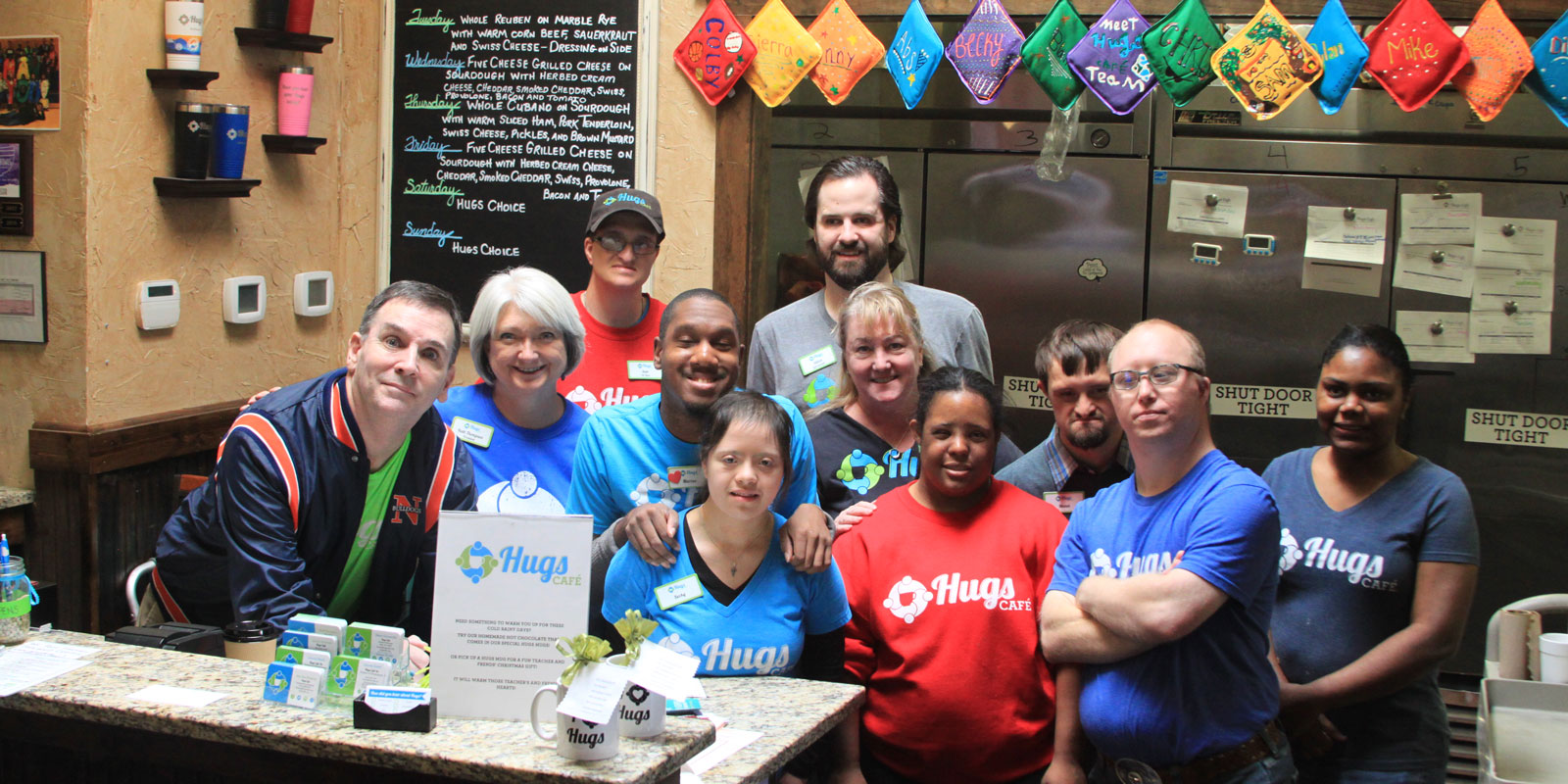 Changing the world one hug at a time

Hugs Café in McKinney is a great place to have a salad or sandwich, but there’s something else that makes the restaurant unique: its employees.

For Ashton, Becky, Blaine, Chris, Cierra, Marcus, Kathy, Manni, Jerry and the rest of the team, it’s not just a job, it’s a community. In fact, more than 20 “teammates” are employed at the café, and they are all adults with disabilities.

This unique café, formed in 2013, is the result of a dream that has turned into reality for Ruth Thompson.

Although she never had a child with special needs, Thompson has a passion and love for the population. That passion was cultivated after

working with adults with special needs in Parker, Colo., in the early 2000s and served as the foundation for Hugs Café.

After Thompson moved to Texas in 2004, she began teaching cooking classes to adults with special needs at Market Street in McKinney.

So while preparing for retirement several years ago, Thompson had a recurring dream of a restaurant that primarily employed adults with intellectual and developmental disabilities and brain injuries.

“Thus the story began,” she said. “This is a God mission. This is what we are supposed to be doing.”

It takes a team

Aside from the teammates employed at the café, six work at the Hugs Greenhouse. All employees earn minimum wage or higher.

“The majority of our café teammates came from the cooking classes that I used to teach at Market Street,” Thompson said. “The Hugs Greenhouse teammates have been discovered through community networking and our contacts within the special needs education programs in Collin County.”

The group that was hired at the café when it opened several years ago hasn’t changed, a sign that they’re pretty happy with their jobs, but it also means there aren’t currently any job openings for those looking to work at the restaurant.

The teammates are not limited in their abilities, so just like restaurant employees elsewhere, Hugs staff members are capable and thoroughly trained to do their job.

Sam, the “pit boss,” is in charge of the dishwashers. Tamika and Kalyn run the kitchen. Mike, a former teacher and coach injured in an auto accident in his 20s, mans the register and kiddingly calls himself Rodney Dangerfield.

This group, and all the other teammates, are supported by Thompson, Cassavale and volunteers.

“We are working a little harder now to find them more opportunities outside Hugs so we can move others in,” Thompson said. “We have two working at Harvest on the Square in downtown McKinney. We are working to convince other restaurants that they can do much more than just roll silverware. They do the dishwashing without supervision. They run this place. It’s just going to take a while for others to come to terms with that.”

Thompson had no experience in the restaurant industry and had never owned a business before she embarked on the Hugs venture. Instead of a panel of people in management positions, Hugs Café is structured as a nonprofit organization with a board of directors for which she is very thankful. Thompson is the founder and president.

“I could write a book on the things I didn’t know,” she said.

It appears she’s doing something right. People from all over the country have contacted her or visited the café since it’s been open. Thompson mentored one young man from Kazakhstan who started a similar café on a college campus in his country.

Building on their Market Street days, Thompson and Cassavale have found a way to continue impacting and teaching other adults with disabilities beyond Hugs teammates. A special program called Hugs Prep, a culinary and hospitality class, is offered at two class times Mondays at the café.

“This makes our monthly impact close to 40 individuals, and we’re constantly looking for ways to expand our efforts,” Thompson said.

At the greenhouse, teammates work alongside fourth-generation flower grower Bill Crump “to plant, water, maintain and sell plants and flowers to the general public as well as landscapers,” Thompson said.

The public is welcome to visit and purchase a variety of annuals and perennials grown by Crump and the team. The greenhouse is located at 3054 County Rd. 205 in McKinney.

“Our teammates want exactly what everyone wants in this life – to be loved, to be of service and to be valued by their community,” she said. “The Hugs programs simply shine a light on the amazing talents of our staff and allow the community to see them for who they were always born to be.”

The teammates are the reason Hugs Café exists, Thompson said, adding that she feels called to serve the local community.

“Just by walking into Hugs every day and seeing the smiles and staff whose lives have been given a purpose gives me great joy,” she said. “In Acts 20:35, Jesus said that ‘it is more blessed to give than to receive.’ This is so very true with what we have accomplished at Hugs.”

The café has become a popular spot for regular customers and visitors.

“The feedback hasn’t always been positive,” Thompson explained. “When we first opened there were whispers of what we were and our mission. That quickly changed once the community began to eat lunch at our café, meet our teammates and see how much value the special needs population brings to the workforce.”

So what’s next? Hugs Café is just getting started, Thompson says.

“We absolutely plan to grow and expand our services in the community,” she said. “Hugs Café No. 2 will absolutely happen. For the sake of those we serve, it has to happen.”

So what are you waiting for? Have you had your hugs today?