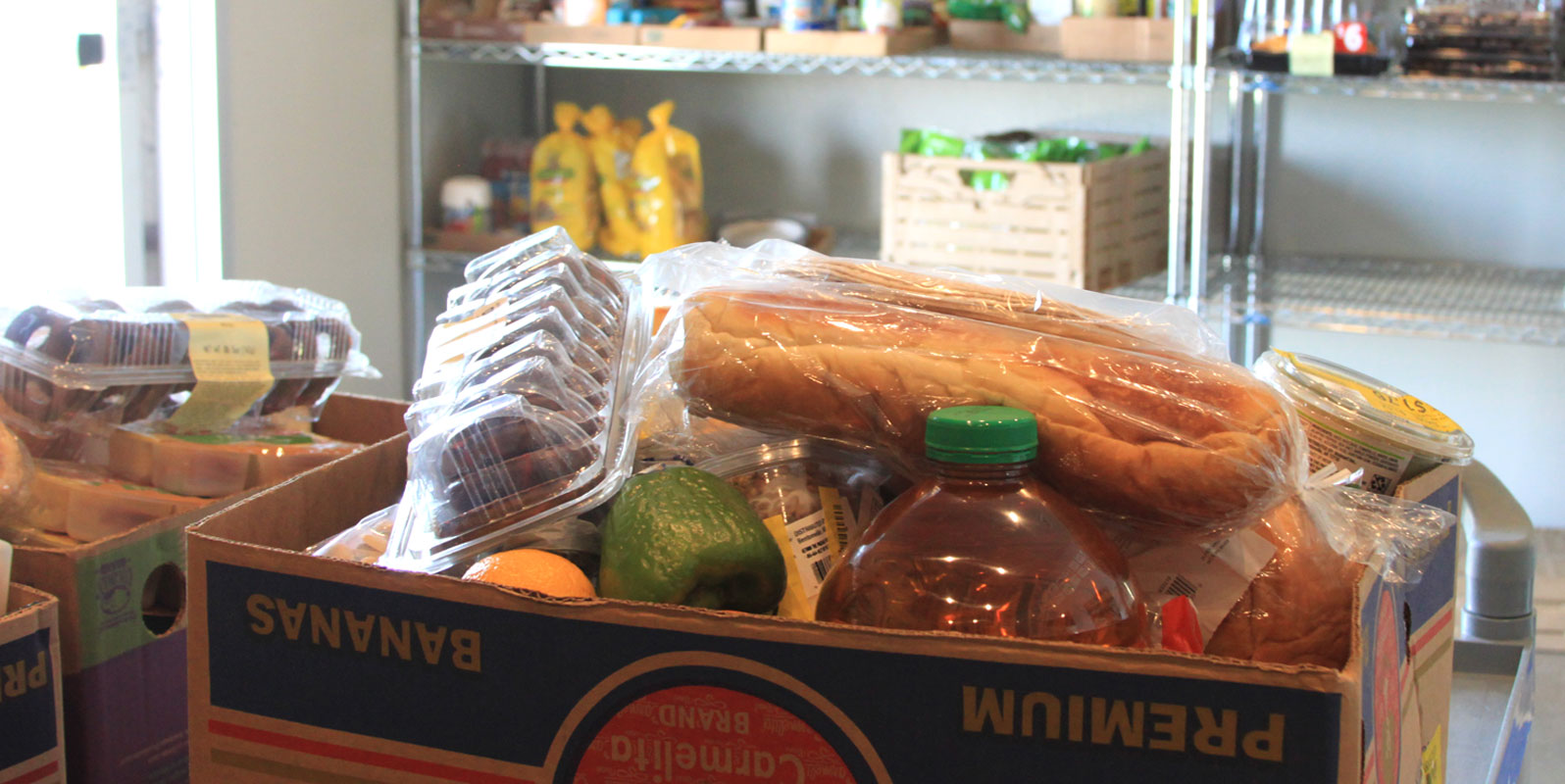 There’s no denying the phrase “don’t go it alone” applies to everyone in a service role as the world deals with the coronavirus pandemic.

Across the country, state, and in cities, we are all in this together as we work to solve problems affecting our communities. Nonprofits, churches and leaders collaborated to explore some of the biggest challenges affecting residents. Food insecurity quickly became the front runner as a result of the pandemic. As jobs were lost, furloughs issued and schools and area non-essential businesses closed, already tight food budgets for many families were stretched thin.

In 2019 alone, North Texas Food Bank provided 77 million meals to kids, seniors and families in need. Now, in 2020, people everywhere are reaching out to food banks – many for the first time ever. In mid-April, over 2,000 Dallas families lined up in a 2-mile procession at the Fair Park parking lot to receive free food from North Texas Food Bank.

In order to safely meet the need for food assistance in the area, NTFB received support from the Texas National Guard to fill gaps normally held by volunteers. As of April 5, more than 250 Guard members were deployed to the food bank. They were assigned to help with production, mobile pantry distribution, warehouse and supply chain, and partner agency support.

NTFB reports they are
now able to create at least 60,000 family meal boxes each week which they make available to partner agencies and through their mobile pantry program. They have opened a temporary warehouse space in Plano, staffed by members of the Texas National Guard, to help meet this need for boxed food.

Thankfully, in Wylie and some of its neighboring cities, alliances have been formed and carefully cultivated over the years by food pantries, churches, volunteers and civic leaders. As a result, the community has stepped up to catch those that might have ordinarily fallen through the cracks.

Once the pandemic hit North Texas, safety measures were adapted by food pantries including drive-thru or carry out pickup methods as they welcomed new clients hit hard by a virus that does not discriminate. In addition, volunteers were drastically cut back as many at-risk senior citizens and students stayed home.

Amazing Grace Food Pantry on Parker Road in Wylie was one of the local food pantries to receive assistance from the Texas National Guard on Thursdays and Saturdays last month. The extra help was welcomed by Manager Karen Ellis.

“We miss our young volunteers that used to enjoy serving – I pray that things get back to normal soon so we can see these teens serving the community again,” Ellis said.

She said COVID-19 has impacted more and more families each week. As a result, they have seen a 25 percent increase in new clients.

“Job loss and the uncertain future has caused a lot of stress and more to search for food assistance,” she said.

The pantry has been able to meet the demand despite the decrease in retail donations says Ellis, because NTFB is letting food banks order for free right now versus paying the traditional 14 cents per pound.

“It’s been awesome,” she said. “Of course, their supply list has been cut two-thirds down to mostly basics such as milk, meat, eggs etc.”

In Sachse, 5 Loaves Food Pantry has also seen a surge in clients over the past month.

While Wallace says food donations have been great, the limits in the stores have made it hard so they have had to find creative ways to get what they need.

“NTFB is working hard to keep up with the demands but they are even struggling,” she said.

Wallace said they are on call to deliver food to several organizations including Garland ISD, the city of Garland, Social Services of Collin and Baylor Scott & White.

In an effort to reach those that need it most, Wallace said the pantry has made home deliveries to seniors, to the sick, and even to people who are homebound with the virus.

“We make no contact with anyone,” she said. “It’s all left on the porch and a call is made or a knock on the door then we walk away.”

5 Loaves is also helping Wylie ISD fill food bags that are distributed Thursdays at Hartman Elementary to help sustain students and their families over the weekend.

Despite how quickly supplies dwindle, Wallace continues to note how generous the community is. Several individuals, families and businesses have either donated items or organized drives of their own.

COVID-19 forced Christian Care Center in Wylie to cancel their annual major fundraiser The Taste of Wylie, but co-director Mary Warkentine says the community has stepped up by donating online and by mail.

“We hope that this will continue and we will be able to help cover the financial needs of our community,” she said.

Warkentine is eager for Christian Care to return to its regular hours in May, but for now they are only open two days a week and juggling a 25 percent increase in demand.

Pre-pandemic, the center provided assistance not only with food, but with clothing and bill payments. For the safety of the clients, Warkentine said the services were temporarily stopped.

“We had stopped paying bills for a short time while we re-evaluated how we would handle paying bills since we normally required people to come in and be qualified,” she said. “We had been assured that during the time we were not assisting financially that there would not be any evictions or utility cutoffs.”

To assist new clients needing financial aid and to eliminate in-person interviews, the center added a new client information form on their website. After the form is submitted electronically, someone from the center contacts them about their financial needs.

“We are experiencing a lot of phone calls from new people who are concerned about whether we will have funds available to help them with future bills,” Warkentine said.

Churches are getting just as involved. The Missions Department at First Baptist Wylie – Jon Bailey, Robert Watson and Debra Tobolka – have stepped up to organize efforts bridge the gap.

“We wanted to get to the hard to reach places,” Bailey said, “that couldn’t get to the schools that were giving out meals.”

The five locations that were pinpointed in Wylie as being in need include Southfork Mobile Home Park, Redwood at the Lake, Glen Knoll, Wylie Propane and the W.A. Allen area.

In an effort to keep things simple, the group looked for sustainable things to make. Bailey said partnering with the local food pantries –  5 Loaves, Amazing Grace and Christian Care – have been instrumental in helping to provide specific items such as chips, fresh fruits and drinks for the lunches as well.

“It’s been great to see the cooperation,” he said. “We’re starting to see the benefits of those relationships that we have already.”

Other churches including Waterbrook, Summit, Northplace, Lake Pointe and Saint Anthony Catholic Church have partnered for the effort as well.

Currently, the FBW Event Center is being utilized as a packing and donation center. Following COVID-19 guidelines, less than 10 volunteers can serve at a time.

“We are working to maintain good hygiene,” reported Bailey. “A nurse screens everyone who comes in.”

Initially, the group handed out lunches at the five locations five days a week. Now the process has been streamlined. They deliver 1,800 lunches on Monday with enough lunch food to last three days and on Thursdays they deliver 1,200 lunches with enough food for two days. They also pack 220 weekend boxes that have 2 family meals for four people.

“It’s a collective effort to serve,” Bailey said. “I have some great people that have really stepped up.”

Bailey said the church is planning to continue to provide lunch until local children in need go back to school.

“We haven’t seen the worst of it yet,” he says.

Wylie United Methodist Church took advantage of the Mobile Pantry Disaster Relief that NTFB is currently offering throughout North Texas. The church signed up twice in April as a host site. Food was offered on a first come, first served basis to anyone declaring a need. As with Amazing Grace Food Pantry, Texas Army National Guard members were on hand to assist clients by loading food boxes into their cars.

The effort to secure food for those in need, and at the same time support restaurants, has spawned another idea.

Restaurants have a different supply chain than grocery stores, a fact that was shared with Wallace when she was struggling to find supplies and food for the pantry.

In fact, some restaurants have stepped up and offered their food distribution suppliers during this crisis.

“I love the partnerships with the restaurants,” Wallace said. “Gino (Mulliqi) at Napoli’s connected me to Sysco and they have dropped two big donations off to us which we were able to share with Christian Care Center, Amazing Grace and Jon and his team at First Baptist.”

Community BBQ in Sachse is helping in a variety of ways. Owner Charlie Cheshire let Wallace order through their food suppliers and use their coolers when needed. In addition, the restaurant is being utilized as a staging area where employees help fill food bags for school families.

The newfound food source prompted Lon Ricker of Ricker Dynamics and Jason Greiner of Wylie Economic Development Corporation to formulate a plan based on conversations with Wallace, Warkentine, Mulliqi and Britt Hammond and Charlie Cheshire of Community BBQ.

Team up to Fight Hunger was formed as “a collaboration of community partners united during the pandemic to promote and support local restaurants and workers while providing food to people in need through local nonprofits.” The goal is to support local restaurants by printing vouchers for meals which will be handed out by area food banks to clients. As vouchers are turned in, restaurants will be reimbursed, hopefully through financial donations by the community on the Team Up to Fight Hunger website.

So far, vouchers for a choice of 3 family dinner options at Napoli’s have been distributed to 5 Loaves, Christian Care and Amazing Grace Food Pantry.

Many food bank clients don’t eat out says Warkentine, so they were thrilled to have a meal they didn’t have to cook.

“It has been a great time of need and I see the whole community coming together and God’s hand in it all,” Ricker added.

Want to help? Here’s how:

First Baptist Wylie Food donations can be dropped off at the FBW Event Center daily from 8 a.m. to 8 p.m.

Team up to Fight Hunger  teamuptofighthunger.com