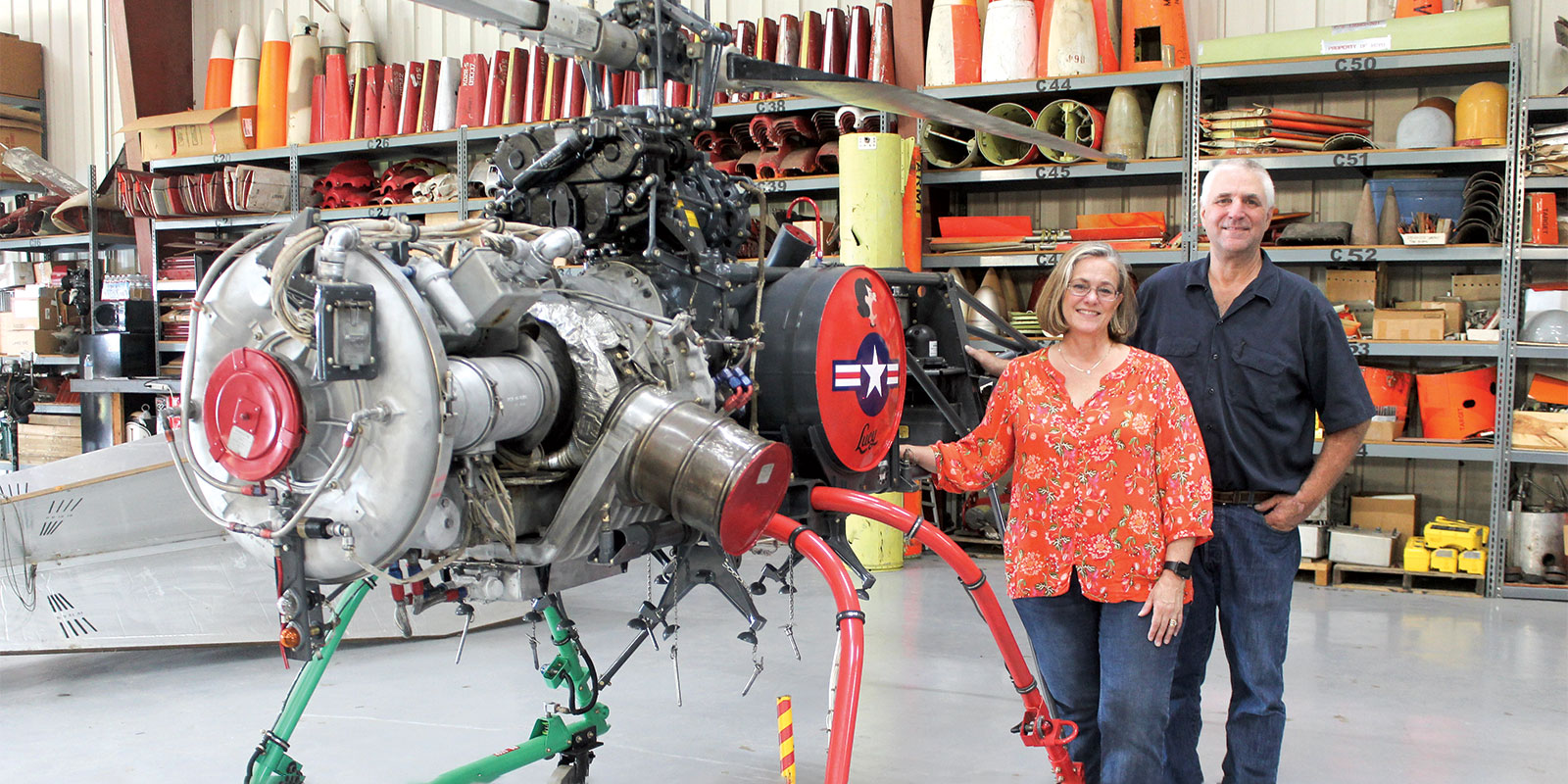 Unmanned flying vehicles, commonly referred to as drones, have been put to many uses in recent years and become popular with hobbyists, but their development comes directly from the military and is chronicled in the recently opened Aviation Unmanned Vehicle Museum at Caddo Mills Municipal Airport.

The museum — the only unmanned aerial vehicle museum in the U.S. — features a massive collection of military drones and parts collected by the late Lt. Col. Harold “Red” Smith who was on the ground floor of drone development during a 28-year career in the U.S. Air Force.

Smith planned to open the museum for years, but after his untimely death in an automobile wreck three years ago at the age of 86, a son and daughter, Doug Smith and Paula Field, picked up the project.

“After the accident, we decided to honor his dream,” Smith said.

“It took us a good year to get it under one roof and sorted,” Fields added.

The brother and sister started gathering the bits and pieces of the collection from where they were stored in a barn, building and the attic of the colonel’s home in Parker. The collection includes about

75 drones, about half of which are assembled and on display in a 15,000 square foot building that houses the museum at the airport.

“These are all flying aircraft,” Smith said.

Although the aircraft have been assembled to flying condition, they are not flown because of various Federal Aviation Administration regulations and to avoid the risk of damaging a piece of history.

The oldest craft in the collection is a Radioplane OQ-2A developed in 1939 for use in anti-aircraft gunnery practice. The Radioplane Company was founded in 1934 by English actor Reginald Denny to manufacture remote controlled model airplanes. The models were sold to hobbyists but led to the larger OQ-2A of which the United States Army Air Corps ordered 15,000 for gunnery practice.

The design of the OQ-2A is similar to that of a Piper Cub airplane, but much smaller. It had a 2-cycle gasoline engine, was launched by catapult and recovered by parachute if it survived target practice.

One of the first drones was the Kettering Bug, a small biplane designed near the end of World War I as an aerial torpedo. The Kettering Bug was, in essence, a kamikaze drone that was destroyed when it delivered an explosive payload.

Early drones could be pre-programmed to fly a specific course, or could be controlled remotely in flight with a radio outfitted with a joystick or toggle switches. The unmanned remote vehicles are designed with wings and the controller manipulates the craft’s control surfaces, such as ailerons and rear stabilizers.

During World War II, the Air Force experimented with converting war weary bombers into controllable flying bombs. A bomber would be filled with explosives, set on course by on board pilots (the pilots would bail out after taking off and establishing the flight path then controlled remotely from a sister ship. The program met with limited success.

Lt. Col. Smith was born in 1931 in Sioux City, Iowa and joined the U.S. Air Force as an enlisted soldier shortly after graduating from high school. He earned an Aeronautics and Aerospace engineering degree under the G.I. Bill from the University of Colorado while on active duty and was then promoted to the officer ranks.

After earning his degree, he was recruited to the Air Force drone program and stayed in the program for the remainder of his service. He served as deputy director of the drone program during two tours in Vietnam.

A chief drone during Vietnam was the Ryan Firebee, which was designated the BQM-34A. The craft was converted successfully from use as a target drone to more strategic duties, such as surveillance, upsetting enemy radar and as a platform for launching missiles.

A Firebee could fly 700 miles per hour at a low altitude of 600 feet. The North Vietnamese could neither track it on radar, nor shoot it down. Several parts were interchangeable so that the aircraft could easily be converted to its several roles.

The model at the museum is painted with eyes and teeth on its nose, akin to the shark’s teeth and eyes design adopted by the “Flying Tigers” during WWII. The Firebee also has marks indicating the number of missions it flew and the names of the airmen who flew and serviced the craft.

“We don’t know exactly how he got it,” Smith said of his father.

As technology grew, remote controlled aircraft transitioned from propeller driven to rocket and turbine engine propulsion. The Firebee was jet driven and could be recovered in air by deploying a parachute, which was then grabbed with a helicopter attachment.

Another craft in the collection has a rudimentary recovery system. The Lockheed X7-A, also known as the Flying Stove Pipe, was almost 33 feet with a 12-foot wingspan. A feature of its design was a long, pointed nose. In recovery, a parachute was deployed, and the craft impaled its nose in the ground, much like a lawn dart.

One of the more rare of the drones in the collection, owing to the fact that few survived WWII, is the Culver PQ-14 Cadet which was a converted airplane that could either be flown by a pilot or by remote control. The Culver was used as an anti-aircraft gunnery target. It was larger than many other drones and had a cruise speed of 150 mph.

“Very few of the Culvers are in existence. Most were shown down,” Smith said.

A favorite of the colonel was the Gyrodyne OH-50, known as DASH for Drone Anti-Submarine Helicopter. The museum model was restored from the frame up with assistance from the son of its designer, Smith said.

The museum model is named “Lucy” and features a drawing on each side of the Peanuts comic strip character. It was one of four vehicles in the DASH program that were named for Peanuts characters.

“We’ve really had an education over the last few years,” Fields says of taking over her father’s dream to open a museum dedicated to drones.

She noted that she knew her father sold drones, but knew little more than that about the business and his collection. Fields, a Lucas resident, owns an accounting firm in Allen while her brother, a Sachse resident, runs the business founded by their father which currently manufactures small parts for military aircraft. Also helping with the museum are Sandra Michaels, the events coordinator, and John Olson, who works on restoration projects.

Aviation Unmanned Vehicle Museum is open from 9 a.m. until 3 p.m. Monday-Friday. Efforts are underway to build a social media presence and solicit sponsorships to fund the nonprofit museum.

“We have a fantastic mission to preserve history,” Fields declared.