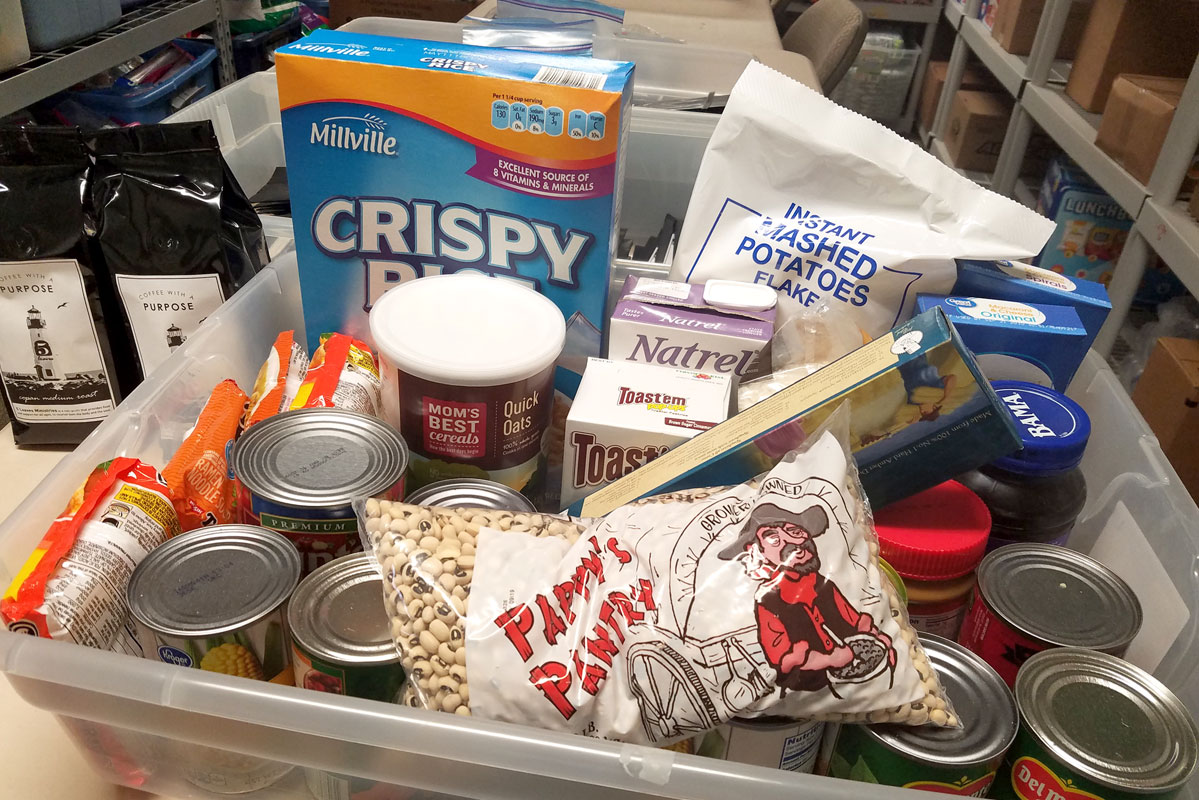 It’s 9:45 on a Tuesday morning and there’s already a line forming behind the 5 Loaves Food Pantry in Sachse. The pantry doesn’t open until 10 a.m., but those in need of its services are eager to begin choosing this week’s groceries.

“When they come to get food from the pantry, it doesn’t matter what zip code they’re in,” Director Audrey Wallace said. “We will take anybody that needs assistance.”

Unlike many food pantries, which hand out bags or boxes of food, 5 Loaves Food Pantry offers a “shopping experience,” says Wallace. The 501c nonprofit, which serves about 80 to 90 families each week, has a room lined with shelves of canned goods, bakery items, produce and a meat freezer. Visitors get a shopping cart and a box when they first walk in, and can choose which food items to take home that week.

Because only a couple of families are allowed in the shopping area at a time, Wallace wanted to create a lobby that was comfortable for visitors while they waited their turn. The waiting area has a couch and offers free cookies and coffee.

“We make a little atmosphere for them because we don’t want them to feel like they’re a number and we’re pushing them through,” Wallace said.

The homeless and others in need can use the pantry once a week. The pantry is open on Tuesday mornings from 10 a.m. to noon and Thursdays from 10 a.m. to noon and 5 to 7 p.m. The food pantry also offers diapers and wipes to families who need them. The addition of Saturday hours starting this month – from 10 to noon every first and third Saturday of the month – has allowed Wallace to serve even more families.

“We’re growing so fast,” Wallace said. “When you put 30 to 35 families in a 2 hour span – that’s a lot. We’re hoping to alleviate some of that growth that we’re having.”

On May 16, 5 Loaves will have another exciting new way to help the needy – a community garden. The garden, which will be made possible by a $10,000 grant through the Garland Home Depot, will provide residents the opportunity to contribute to the food pantry in a unique way.

Fresh vegetables harvested from the garden will be added to the food donation assortment for the families. Some plants have already been donated by the Garland ISD FFA.

Wallace’s idea for the 5 Loaves Food Pantry started about three years ago when her church, North Pointe Church of Christ, began receiving phone calls about families in the community that were in need of food. Before long, Wallace was delivering food regularly to about five families in the area, which made her realize the need for a local food pantry. The North Pointe Church of Christ offered Wallace a space in their ministry house at 4401 Williford Rd in Sachse.

“They gave me a few shelves in that room in there and this whole house was shared with the youth, the Boy Scouts, and the quilting women. There was also a library and ping pong table,” Wallace said. “From that, we grew and we have the entire house now.”

Wallace worked as a marketing and public relations specialist for American National Bank for 10 years before transitioning to a position at the Wylie Flower Shop. She now focuses full-time on running the food pantry. She lives with her husband in Wylie and has four daughters and 7 grandchildren who range in age from 6 months to 18 years. She said her family has been supportive of her work on the pantry over the years.

The pantry became a 501c nonprofit in early 2017. Since she opened the food pantry, Wallace has received tremendous support from the community, including donations from local businesses and volunteers from local organizations. In addition to donations and a partnership with the North Texas Food Bank, the 5 Loaves Food Pantry also sells bags of coffee to help offset some of its expenses. A one-pound bag sells for $10, which is enough to buy 28 pounds of food.

“When I first started, I thought if we had to sustain ourselves and nobody ever donated, we would make coffee,” Wallace said.

She went on a mission trip to Honduras three years ago and was excited at the prospect of partnering with a coffee farm there. The food pantry started selling the coffee about a year and a half ago. Supporters can choose from four different kinds of gourmet coffee from Honduras, Guatemala and Brazil. They grind and bag the coffee in house and all proceeds go directly back into food pantry operations. The local Girl Scout troop is also working with 5 Loaves to create flavored coffee.

To be able to keep up with coffee sales, Audrey partnered with the Transitions to Life program at Achieve Academy in Wylie. Students from the Transitions program come every Tuesday to help grind the coffee and attach labels to the bags. The Transitions program helps special needs students who are 18 to 22 years old obtain job skills so they can become independent. The students also help 5 Loaves Food Pantry with other tasks, such as putting together hygiene kits for the homeless.

“The main thing is that we want the kids to see that there’s a need for volunteers and we want them to be involved in their community,” Debbie Courtney, a teacher at Transitions to Life, said.

Other than purchasing their coffee, community members can also help the food pantry by donating non-perishable food.

“If they go to the store and pick up a couple extra cans – that’s great,” said Wallace.

The pantry holds community events each year for Thanksgiving and Christmas. Last year, Wallace hosted a Thanksgiving dinner for senior citizens and a large Christmas dinner event for more than 50 families.

Even though the 5 Loaves Food Pantry has grown considerably in the last three years, Wallace is already looking to expand further and has a clear vision for the future. Aside from the pantry, she hopes to offer a clothing closet as well as a place for the homeless to receive additional services. For Wallace, that means raising the money needed to purchase land and build a new location.

She would also like to open a coffee shop and help the Transitions students run it.