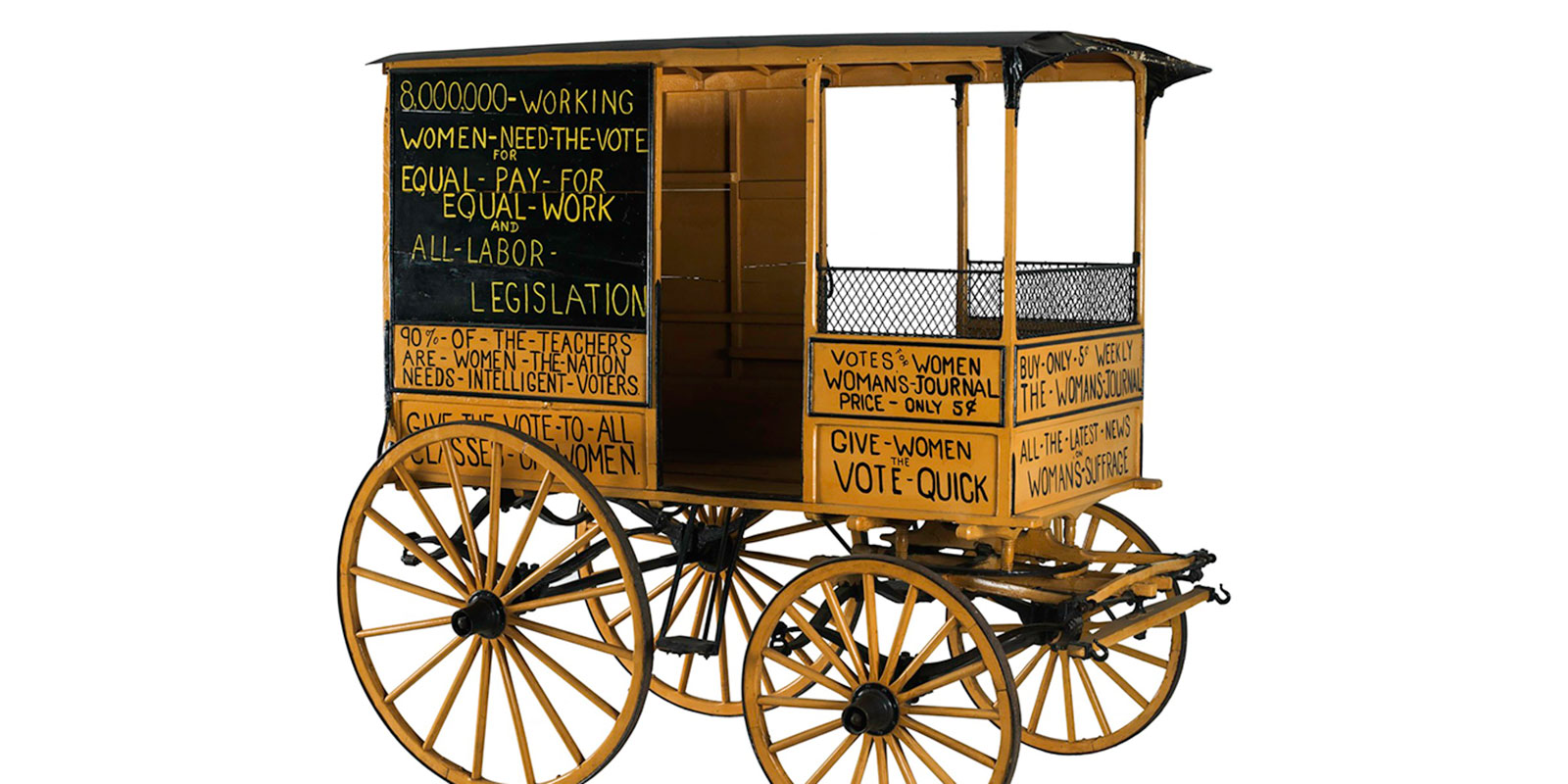 Well-dressed ladies wearing wide-brimmed hats, long skirts and grim determination on their faces hold up signs that read, “Votes for Women!” “To Ask Freedom for Women is Not a Crime,” and “Mr. President, How Long Must Women Wait for Liberty?” among others. These women suffragists marched for freedom for decades, until one hundred years ago this year their fight was won: women in the U.S. gained the right to vote (although Native American, Asian American and Black women had to wait a bit longer until their voting rights were secured). The official centennial anniversary happened on August 18, but this month is still a perfect time to celebrate. After voting on Election Day, Nov. 3, go out and honor the history of women voters by checking out awesome museums, tours and events happening around the country this month.

Start your step back into history at the National Susan B. Anthony Museum and House in Rochester, New York. This home was the headquarters of the National American Women Suffrage Association when iconic civil rights leader, Susan B. Anthony, was president. It is also the site where she was arrested for voting in 1872 and where she died in 1906.

Seeing the museum on Anthony’s 200th birth year, as well as the 100th anniversary of the 19th Amendment, is guaranteed to be special. Although many of the extra events this year were canceled due to COVID-19, you can still go on a guided tour of the outside of the campus, walk through the first floor of the Susan B. Anthony House and shop for historical-themed gifts at the Museum Shop, including the newly released Susan B. Anthony Barbie doll! Through Nov. 30, you can admire the fantastic “Underpin and Overcoat” exhibit by artists Amelia Toelke and Andrea Miller, presented by the Rochester Contemporary Art Center, the National Susan B. Anthony Museum and SewGreen Rochester. This public art installation
features large-scale jewelry, pins, ribbons, sashes and medals like the suffragists made, hanging from public buildings in town as an homage to women’s rights.

Also, you can tune into the museum’s Monday Lecture Series that cover timely topics inspired by the life and work of Anthony. Upcoming lectures include “Amnesia and Politics in the Mount Hope Cemetery” by lecturer Katie Terezakis, Ph.D., on Nov. 16 and “Relationships and Rights: Sophonisa Breckinridge, Same-Sex Relationships, and Women’s Activism in Modern America” by lecturer Anya Jabour, Ph.D., on Dec. 14. These live-streamed events are $25 each to attend and can be found at susanb.org.

While you’re in New York, visit the Women’s Rights National Historic Park in Seneca Falls. This is the site of the first Women’s Rights Convention held in 1848, which began the women’s rights movement. Visit the Waterwall at Declaration Park to read the words of the Declaration of Sentiments; take pictures of the outside of Elizabeth Cady Stanton’s house; and visit the Wesleyan Chapel where the convention tool place and listen to outdoor ranger talks. Nps.gov/wori.

Next, visit Alexandria, Virginia, to see the National Women’s History Museum. This is the only women’s history museum in the country, which is dedicated to uncovering, interpreting and celebrating women’s diverse contributions to society in a non-partisan way. Be sure to check out the “When Women Vote, Women Win” initiative running through the end of 2020. This will include voters’ resources, educational programming, a digital campaign video series (where women will share why they vote) and information about the 19th Amendment and the work that happened afterward to ensure all women had the right to vote. Learn more at womenshistory.org.

From there, head to Washington D.C., where you can take a picture in front of the Belmont-Paul Women’s Equality National Monument. This was home to the National Woman’s Party (NWP) for approximately 90 years, and it was where Alice Paul and the NWP developed and advocated for the Equal Rights Amendment and equality for women. Nps.gov/bepa.

Another way you can learn about influential women is by visiting the National Museum of American History, also located in D.C. You can tour the “Creating Icons: How We Remember Woman Suffrage” exhibit through May 2021, which highlights 57 artifacts and graphics that tells stories of the famous heroines and the forgotten women who worked hard to win the right to vote. The cool thing about this exhibit is that it doesn’t gloss over the fact that our fearless feminist leaders weren’t perfect — many amazing women were erased from our history books and memories, and they weren’t given the right to vote for many years after 1920.

One of the things you can see include Adelaide Johnson’s marble “Portrait Monument to Lucretia Mott, Elizabeth Cady Stanton and Susan B. Anthony,” depicting leaders in the women’s rights movement. Stanton was the president of the National Woman Suffrage Association from 1865-1893 and the author of the woman’s bill of rights; Anthony proposed the constitutional amendment for women’s rights that passed after her death; and Mott was a Quaker reformer and preacher, who worked for abolition, peace and equality for women in jobs and education. The rest of the statue is left unfinished, which represents all of the women’s rights left to win.

At the museum, you can also see campaign pins representing the 131 women members in the 116th Congress; a torch with a scroll containing a declaration by poet Maya Angelou, which was run from Seneca Falls to the Houston 1977 Women’s Conference; buttons, pamphlets and photos representing women fighting for rights; and artifacts from the 2017 Women’s March, including protest signs and pink knitted “pussy hats” worn by participants.

Online, you can check out the “Votes for Women” exhibit, featuring three generations of women who fought to overcome male objections to the right to vote by showing that suffragists were strong, experienced mothers, homemakers, breadwinners and community activists. Learn more at americanhistory.si.edu.

Another fantastic online exhibit was curated by the National Archives to celebrate the centennial anniversary of the 19th Amendment: “Rightfully Hers: American Women and the Vote.” Visit archivesfoundation.org to explore the captivating lives of the suffragists via a virtual exhibit, downloadable posters and a curator-led online tour.

Finally, learn more about women’s rights history, get more information on online and in-person events and explore colorized photos of the suffragists by visiting 2020centennial.org. This website is run by the 2020 Women’s Vote Centennial Initiative (WCVI), which shares programs, projects and activities to commemorate the 100th anniversary of the 19th Amendment; educates the public on legal and social advances resulting from the amendment; and stimulates dialogue to address the ongoing fight for women’s rights.

Sojourner Truth, former slave-turned abolitionist and women’s rights activist, once said, “If women want any rights more than they’s got, why don’t they just take them, and not be talking about it.” Let’s encourage every woman we know to fight for women’s rights by voting, advocating for your beliefs, running for office and learning about the past to better prepare for the future. According to the WCVI, only 19.6 percent of elected officials in Congress are women, and during the 2016 presidential election, one in three eligible women did not vote. We must work hard to honor the women who came before us, to take up their pickets and use our voices to continue to fight for equality.

Filed Under: Latest, Travel
Crazy for Cars
Called to Serve