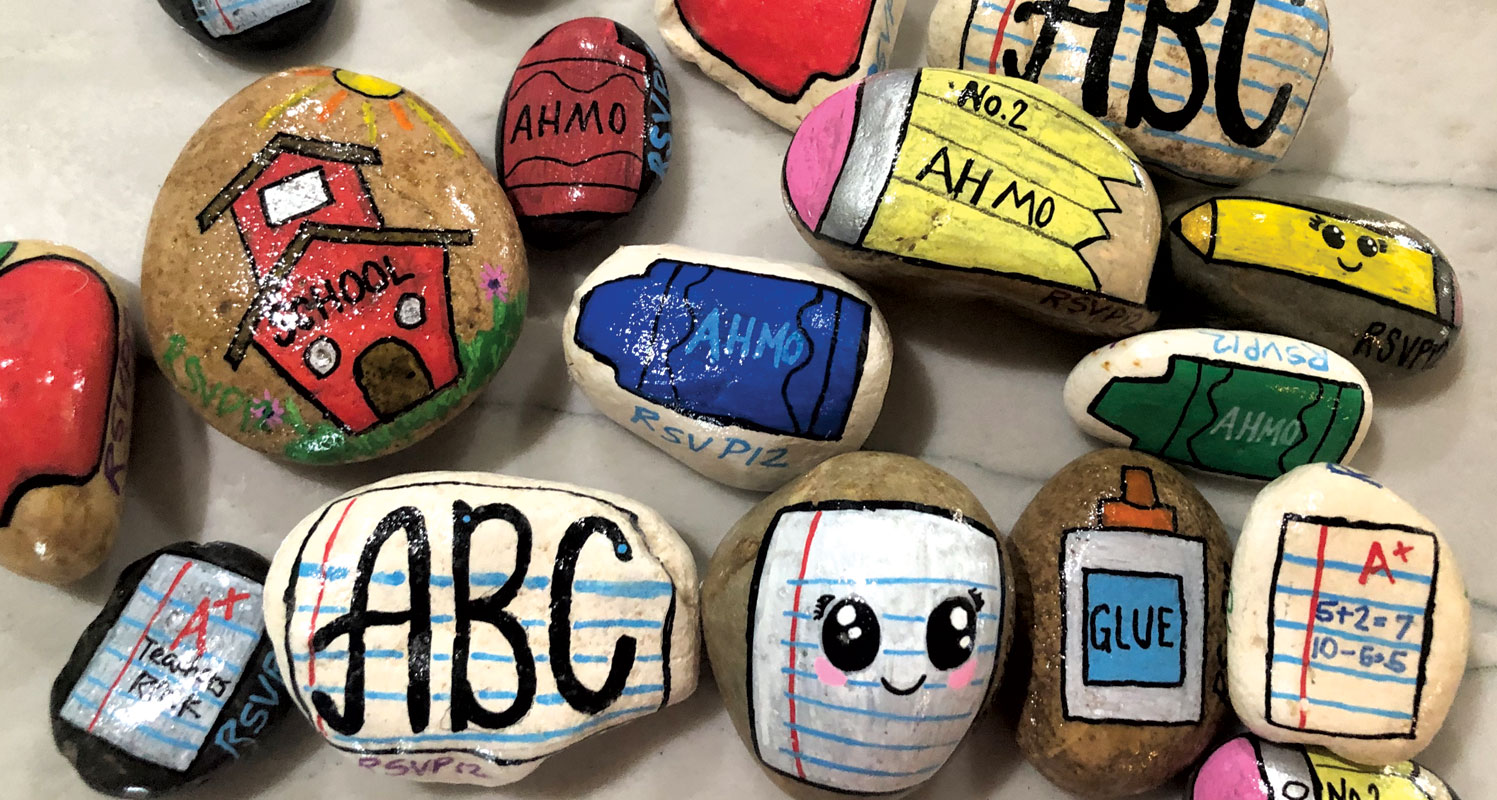 For the past two years, a quiet game of hide-and-seek has been going on in Wylie. First it started downtown, then it spread to the library and local parks. Before long, these unique treasures hidden in Wylie appeared in other Texas cities and throughout Texas. Some treasures were even brought on vacations, on cruises and out of town trips.

What are they hiding? What are they seeking? Quite simply, they’re rocks. Small landscape- style rocks that can fit in the palm of your hand but are big enough to have a nice flat surface to paint.

If this sounds weird or wonky to you, you might be living under a rock. There are over 1,700 groups and well over 4 million individuals participating in the rock painting movement according to the Facebook site Rock Painting Groups map. Pinterest pages are flooded with

ideas and there are multiple websites dedicated to the art of rock painting…and hiding. It’s a game that is gender and age neutral and you don’t have to be Picasso to paint them.

The popularity of the rock movement spread to Wylie two years ago. The group was started by Cheryl Lee and Vanessa Smith, two mothers

looking for a creative outlet that they could enjoy with their kids, family and friends.

Lee, a Lavon resident, was visiting her mother in Denison two years ago when she heard about Denison Rocks. She really liked the idea, but as a working mom with a 3-year-old at the time she didn’t want to go solo in the endeavor. “So, I went on the Wylie Moms (Facebook) page asking for help.”

Smith responded to Lee’s plea. A newcomer to Wylie from San Antonio, Smith wanted to find something non-electronic to do for the summer with her son Riken and daughter Paloma, 11 and 8 at the time. Earlier that summer, while on a trip to Houston, they found a painted rock in a park and Smith told her kids, “This is the coolest thing. This is right up my Pinterest creative alley.”

After she saw Lee’s post on the Wylie Moms page, it piqued her interest.

“I had never met her before and I sent her a message and asked her if she would be interested in starting a page together.”

Neither woman wanted to take the project on themselves. Lee agreed with Smith it would be a collaborative situation, and after their initial meeting, the women devised a plan for their new Facebook group called Wylie Rocks in June 2017.

It’s hard to start a hide and seek painted rock group without anything to hide so the women started with intensive rock painting sessions. In addition, Lee said they also held a painting session at the park. After two weeks of painting, Wylie Rocks went public.

“We painted as many rocks as possible. Simple hearts, stars etc. just to get it out. Then we started taking pictures of them,” Smith said. “Before we went public with the Facebook page we put as many out as possible in high traffic areas: Olde City Park, PSA in Murphy, Smith Library, etc.”

Once locals started finding the hidden rocks, they were, and still are, encouraged to post a picture of the found rocks and to rehide their rocks with a clue on a group Facebook page.

If you can’t live without the rock you found then you’d better get busy painting. “If you decide you want to keep a rock, then you can always paint one to hide,” Smith said.

Not all of their rocks stay in the Wylie area and Smith said some have literally been all over the world.

“I took 25 rocks when we went to Colorado in February and put them all over,” she said. “I think someone found it (a rock) then it went to Iceland and from there it has been going all over. That’s really fun to see when they travel.”

Wylie Rocks member Kim Welch said she started painting rocks last October and on average probably paints about a dozen or more rocks a month, depending on how detailed they are.

“At church we started a rock painting class this year as an outreach to the community,” she said.

Stacey Schroeder, an retired engineer from Wylie, painted a large rock with a depiction of St. Anthony’s historic church it. The rock was claimed immediately once the photograph was posted showing the rock placed near the door of the church.

“I usually paint about six a week,” she said. “I just enjoy being able to bring a smile to people’s faces.”

Rock painting is relatively inexpensive as far as hobbies go. The duo said anyone can buy rocks at Home Depot or Lowes for around $11 for a 10 lb. bag.

“It can keep you busy for a long time,” Smith said. “It’s very therapeutic.”

If you join the site, members occasionally share painting tips and deals for art supplies.

The cheapest way to go, of course, is to find rocks in their natural element; at the lake, in parking lots, and other random spots.

Smith said they’ve had a lot of trials and errors as far as the paint supplies go but she personally prefers paint pens because they are easy to use and portable for those days waiting in the carpool line or at kids’ practices.

“I usually have a shoebox full of random rocks,” Smith said. At a volleyball tournament recently Smith said the kids had a 2-hour break so they went to Chik-fil-A and she brought a basket of rocks and paint pens and had Paloma and her friends paint rocks.

The women said that Modge Podge doesn’t hold up to the weather as a sealant, so two coats of clear spray paint work best. “We kind of have it down to an art form,” Smith said.

At Boo on Ballard this year, Wylie Rocks gave out over 1,500 rocks. Smith said they simply used stickers for the majority or rocks then sealed them.

“It was more about getting our name out,” she said.

The goal of Wylie Rocks, and pretty much any other painted rock site or Facebook page, is to collect members. In a little less than two years the women have acquired 1,875 members.

“It took off faster than we thought it would. We would be so giddy over every number that came in,” Smith said.

These days with the number of members Wylie Rocks has, the duo doesn’t feel as much pressure to keep the supply out there especially because there’s a lot spider webbing around.

“Our whole purpose was just to put a smile on somebody’s face whether you’re painting them or hiding them,” Smith said.

Filed Under: Latest, Local
Give Ginny a home!
Ribbon-Winning recipes