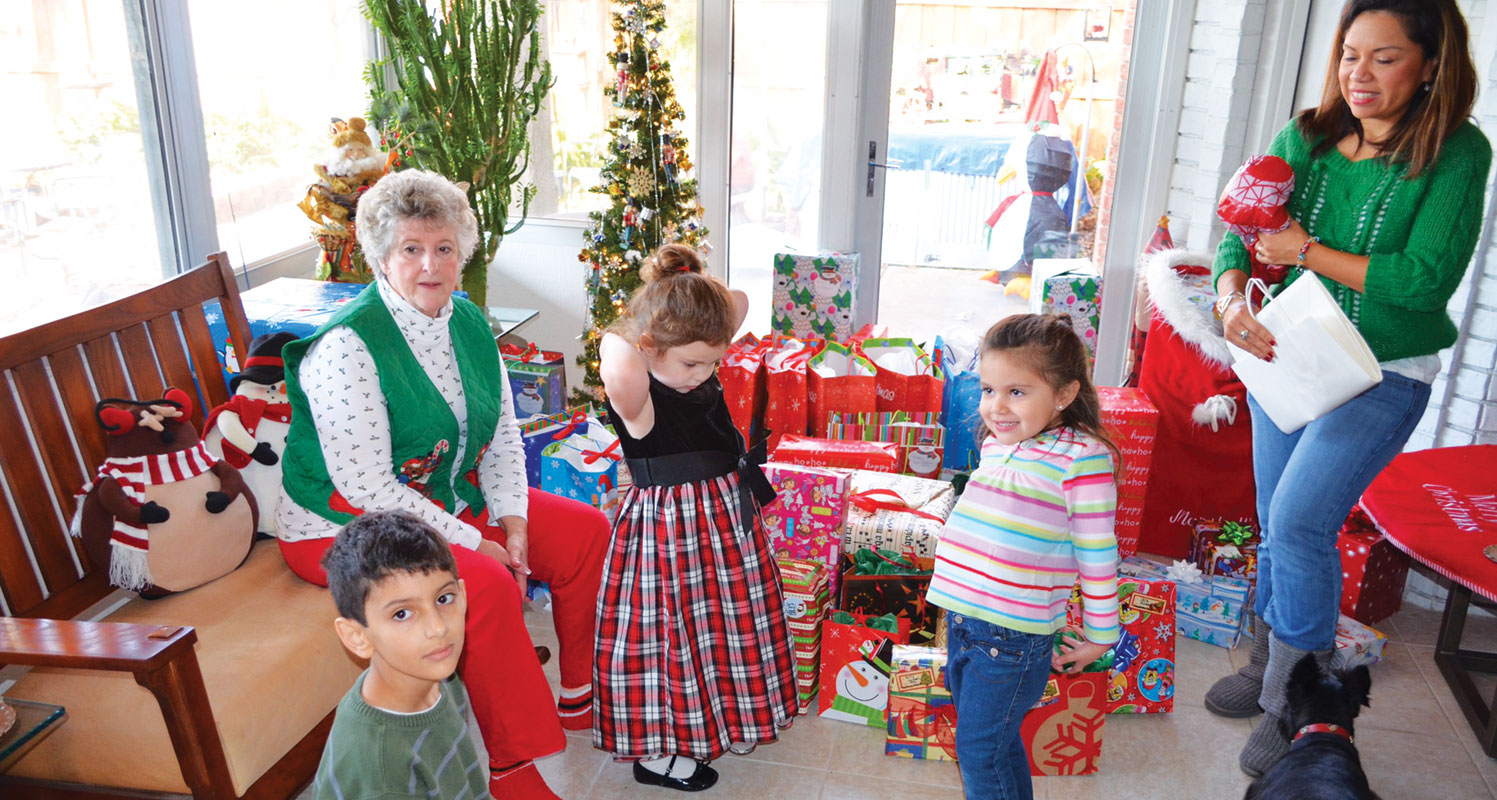 This time of year most families enjoy gathering together to deck the halls, so that when Christmas Day rolls around they can celebrate the holiday in style. But few matriarchs put as much care into their decorating as Karen Marshall, who has been turning her Plano home into a bonafide winter wonderland for decades now.

“I’m a big decorator; I’ve been decorating all day for a week getting the house and yard ready… I have six trees I put up. Each tree is decorated different; some of that I grew up with and some I started since I married… I do a tree that is a live tree and all the
ornaments on that tree are handmade. I have one tree that I buy an ornament for every year. I’ve been married 50 years, so I have one from each year. I do one that is all nutcrackers and drums,” Marshall said.

That’s not to say that decorating is a solo affair, though. “I have a playroom on the third floor, and the granddaughters have cottages they decorate, and a tree they decorate…I put felt snowflakes all over the floor, so it’s like a winter wonderland.”

The Marshall home is also filled with a variety of nativity scenes, some wooden, some needlepoint, some origami,
etc. “And I have lots of Santas and stockings for every family member on the staircase, and two nutcrackers on each
step… My dad [who was an architect] used to say, ‘You

don’t decorate your house for Christmas. You desecrate it.’ He was not as big of a Christmas person as I am. I remember he used to say to my mom, ‘That’s enough.’ But she would say, ‘I’m not through,’ and she would keep decorating.”

Marshall clearly inherited her mom’s ‘more is more’ attitude when it comes to the holidays. “I have more decorations than some stores,” Marshall said. “The holidays are really special!”

In fact, recently Marshall took her mom out for a 96th birthday dinner, and her mom’s friend asked if she had even more decorations. She also said, “Karen, you just get
excited about it. Just listening to you, you can tell by your voice that you’re absolutely so excited about Christmas.

“It’s just absolutely an awesome time, and the gifts are nice, but I think what we celebrate, which is Christ’s birth, is a wonderful, wonderful time… I don’t like Easter because I don’t like that he died, so even though that saves me, it bothers me that he suffered. But Christmas… There’s just nothing like Christmas. It’s absolutely the most wonderful holiday ever,” Marshall said.

Before December even rolls around, the entire Marshall family actually gets busy at the work of merrymaking. “At Thanksgiving, the day after, we all go and cut a live tree down and come over to my house, and celebrate late November birthdays. Then when everyone leaves I hand each family member a Christmas ornament that is something appropriate to them,” she said. “For instance, my grandson got a trumpet because he plays it, and my granddaughter got a rocking horse, because she rides horses. This year I’ve got a snowman with earphones on for my grandson who is always listening to music… I make sure that every ornament is something special to them. That’s the first gift you get every Christmas and that starts the Christmas season,” she said.

When she’s not trimming the trees, or putting out her other decorations, you’re likely to find Marshall busy at work in the kitchen, preparing many of the traditional German dishes she grew up loving.

“German oatmeal is something that has been handed down in my family for five generations. My grandmother wouldn’t give the recipe to my father until she was on her deathbed. My dad gave it to me several years ago… it takes a long time to make it, but I make it every year, and have some to hand out to the kids to have with their family.”

The oatmeal is actually flavored like a savory breakfast sausage, and is generally served with an egg. “You cook a pork roast and you buy scotch brown oatmeal, which is like steel cut oatmeal. You cook the steel cut oatmeal with the juice from the pork, and shred pork into it and add pepper and mustard seed. Then you mix it up and make a sausage, and fry it up and serve it with an egg.”

And that’s just one of the traditions Marshall has happily carried on from her own childhood. Though she grew up in Dallas, her parents were both from Ohio, and her grandparents were from Germany. “My parents’ families knew each other, and because of the depression they both moved down here to find jobs… My background is German on both sides, so I do several different things.”

In addition to the oatmeal, Marshall also makes a special holiday pudding, inspired by one of her grandmother’s specialties. “My grandmother would fix brandy sauce, but for minced meat pie. I don’t do that. But I do pudding and put hot brandy sauce on it.”

The brandy sauce is actually particularly meaningful to the family, because it too offers a nod to her ancestors. “My mother’s grandfather would make brandy from the basement of his house in Ohio and in Germany before that, so I always serve blackberry brandy… my mom, she grew up on it.”

“Before Thanksgiving I make an English plum pudding, and I take that pudding and wrap it in a cloth that I’ve soaked in brandy, and I put foil around it and put it in the ice box. And at Christmas we serve it hot, with a brandy sauce for dessert… My grandmother used to put two tablespoons of brandy in hers – I put about a half cup. It’s much better with a half a cup,” Marshall said, with the kind of rich laugh that would make Santa himself proud. “My kids’ friends would say, ‘No wonder you’re so happy at Christmas. You baste the turkey with sherry and make pudding with brandy!’”

Alongside the turkey, the Marshalls will often serve ham, and two kinds of dressing, one savory and one sweet. They also have spiced apples, made with brown and white sugar, lemon juice, cinnamon, nutmeg and Red Hots, which help to turn the apples a festive red tone. “We eat pretty good over here… We get together Christmas Eve and have breakfast, and open gifts, and go to church, then go to our son’s house to have another meal. So we are all on Weight Watchers by the first of January,” Marshall said.

These days Marshall is happy to share the cooking responsibilities with her youngest son and anyone else willing to help. “He’s a really good cook and he likes to do it,” she said. Marshall has also shared her family’s recipes in the form of very special gifts.

“The first year of marriage is paper. So the first year my kids married I gave each one of my daughter-in-laws a cookbook of all the family recipes, so that they would be able to make those at their house.”

Marshall’s granddaughters are also happy to be put to work in the kitchen. “We make gingerbread houses, and cookies at Halloween and

Christmas. My mom used to always make cookies and decorate them, and when she decorated cookies it was like a work of art… She always made Christmas cookies, and she used to give those out to people. She’d always give cookies to my kids and grandkids.” Now, they simply get to enjoy the fun of helping to make the cookies, before satisfying their sweet tooth.

But spending time in the kitchen isn’t the only way the Marshalls have found to create holiday memories. They also enjoy watching holiday movies, together. “We watch all the old Christmas movies, ‘Miracle On 34th Street,’ ‘White Christmas,’  ‘It’s a Wonderful Life’ … Even though I’ve seen them a jillion times, I cry through them every year,” she said.

Perhaps the most time-honored of all their holiday traditions, though, is one of the simplest, yet most profound. “Every year my mother would write a letter to the family on everything that happened during the year, both to each family member and some world events… It’s priceless. It’s just priceless.”

In addition to photos and mementos going back seven generations, Marshall is particularly grateful to have the many letters her mother wrote over the years. “I have letters from the year I was born in 1947 (I’m 71) until now…  I have letters to me by my mom, telling me everything that happened in our family, and then my mom and dad went back and did their earliest memories to when they married, so I have all that history, written down, on paper.

“When my mother’s parents died, and both the same year, I had my mother’s feelings on paper, of how she felt that year when she was only in her 30’s… I have all that history, that we have as a family, and I don’t think a lot of people have that.”

Marshall’s mother was very artistic, too, so many of the pages she penned are also decorated. “Each one is beautifully done, and that’s a tradition that I’m carrying on, so that my kids have all that history. I keep scrapbooks, and I have pictures of every family member, every year, and what happened – what trips we took, what illnesses we had, what special things happened, what awards we received… I have all that history on paper to pass down from generation to generation. I think that’s really special,” Marshall said.

“My kids appreciate it, because they look back now, and if they ask, ‘When did such and such happen?’ I can tell them exactly what happened. I can read it to them… And there are times that I’ll just sit down and read one of them. To refresh my memory.”

Christmas trees and traditions are nice, of course, but Marshall makes it clear that what matters most to her is simply being together to celebrate her favorite holiday. “We’re a real close family. We all go to church together. We don’t live far away from each other. We enjoy each other’s company!” she said. “We get together to celebrate birthdays and holidays, because that’s what makes family.”