Ringing up a collection 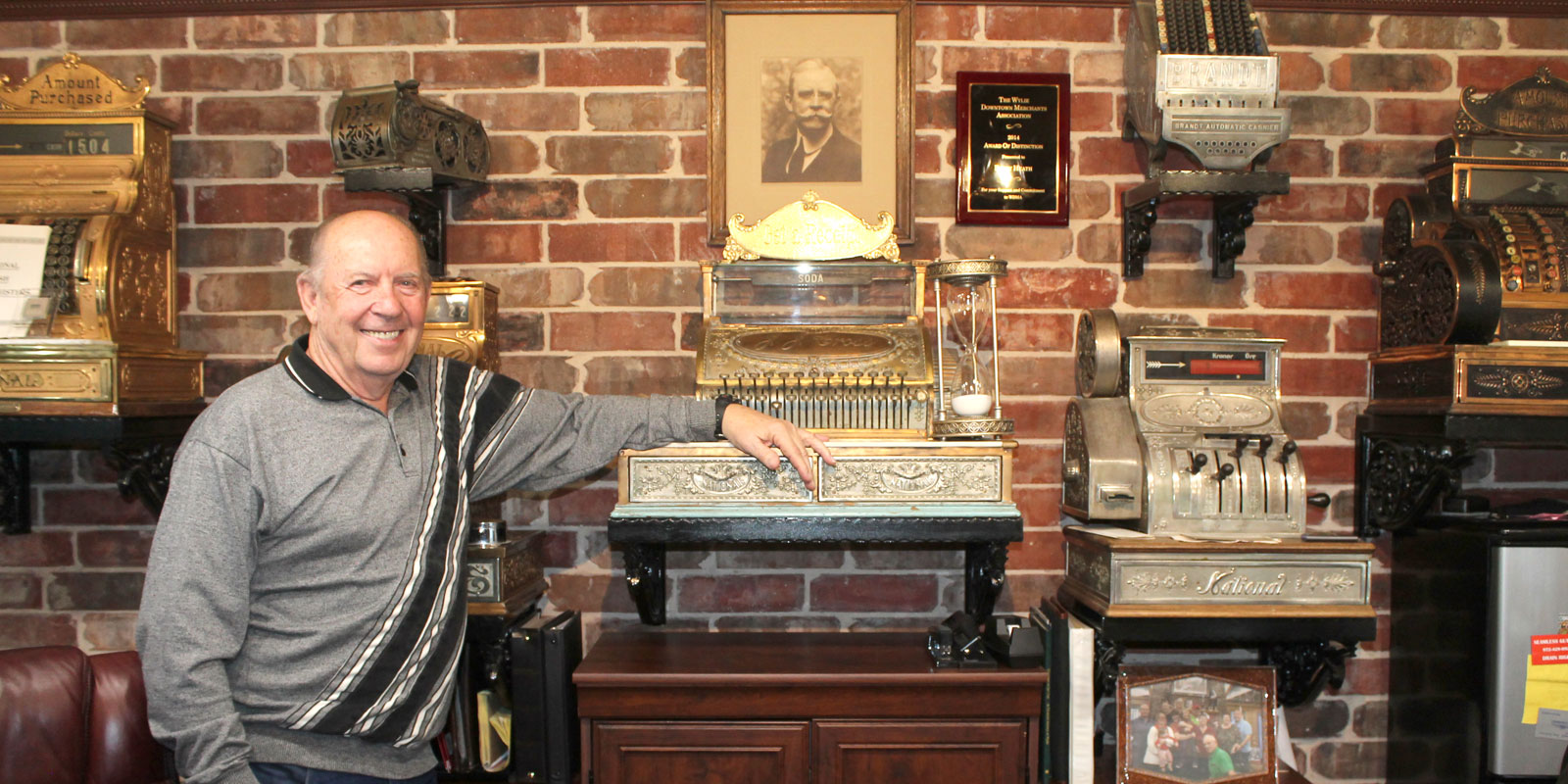 Deep in the recesses of a building in downtown Wylie in an old bank vault, rest nine functional works of art representing a portion of the antique cash register collection of Bob Heath.

The cash registers date back to the late 1800s and early 1900s and have been gathered by Heath over the past 40 years.

“I started collecting them 40 years ago out in California,” he said. “I saw the art in it. They are beautiful.”

The registers are more than places to safely keep money; the metal cases are cast with intricate designs and often were painted to bring out details of designs. Cases are brass that may be presented in the natural color of the metal, or changed with nickel or copper plating.

Most of the machines are National Cash Register Company (NCR) brand because, Heath reported, NCR owned the patents to the machines’ inner workings and would run competitors out of business.

“No company lasted very long,” the Wylie collector explained. “You almost couldn’t make a cash register without breaking one of their patents.”

Heath explained that the first cash register was invented by a saloonkeeper to prevent his bartenders from stealing the day’s receipts and was patented in 1879. That cash register was the start of NCR founded by John Patterson in Dayton, Ohio. A picture of Patterson hangs in the Wylie businessman’s office.

One of Heath’s machines that isn’t NCR was manufactured by Automatic Bookkeeping Register and is a combination adding machine and cash register in nickel plating. It is one of only three made by the company before NCR sued and put it out of business, the collector said.

The Wylie businessman, the senior partner in Heath and Heath Enterprises, was reared in Beaumont and is quick to point out that although he lived in California for several years, he returned to Texas as soon as he could.

He noted that while operating a manufacturing firm in California, he started collecting antiques until he ran across an old cash register and his focus shifted. He put together a collection but had to sell it when business took a downturn in the early 1980s.

Heath recalled that a Chinese billionaire agreed to buy the entire collection for $100,000, but when a representative of the buyer showed up with a truck to load the machines he brought $90,000 instead of the agreed on price. Heath took the lesser amount.

That collection included some one-of-a-kind machines and a good story on how he acquired several of them. Through a collector in Texas, Heath met a collector in Chicago, Sam Robbins, who had written books on old cash registers and was selling part of his accumulation because he needed the cash.

The businessman said he flipped a coin on each machine to determine whether Robbins was selling or keeping and did so until buying $25,000 worth of cash registers, which was the amount of money Robbins needed.

Heath returned to Texas after the business downturn, moving to Plano. He flipped houses he and a partner bought in Oak Cliff, then had an opportunity to buy the rights to a product that, when applied, made tile floors slip resistant. He and a partner built the process into a good-sized business.

“We had distribution around the world,” the businessman declared.

In the mid 1990s, he came to Wylie where he had bought a building on Hwy. 78, then bought a couple of buildings on N. Ballard Ave, including The Wylie News building at 110 N. Ballard.

He restored the two buildings and set his sights on acquiring more. “There were vacant buildings up and down the street,” Heath recalled.

After a fire in downtown Wylie, he bought five more buildings and renovated them. All in all, he has owned a dozen downtown business buildings and still has four of them plus a few buildings in other parts of town.

The office of Heath and Heath is at 201 N. Ballard Ave., a building that formerly housed Inwood National Bank. About eight years ago, Heath took the 12×18 vault and converted it to his office and a place to show off some of his cash register collection. The 18-inch-thick concrete walls are covered with brick from the Fort Worth Stockyards, and with plywood that allowed construction of space to run electric wires.

“It’s unique and a lot of fun to come to work to,” the businessman said.

The nine antique cash registers on display in the office are not even half of the collection. Another 22 are at Heath’s home in Parker in a climate-controlled garage.

He has built his second collection through visits to antique stores, chance encounters and off eBay. The Automatic Bookkeeping machine that is one of only three ever built came from a seller on eBay that, the collector pointed out, did not really know what he had so the price was right.

One day, he recalled, a man drove up to the office looking to sell a cash register that was in the back of his pickup. Heath bought it partly because it sat on a metal stand unlike anything he had seen before. It turned out the stand is worth more than the cash register.

NCR manufactured its cash registers in a plant at Dayton, Ohio and also opened a second plant in Berlin, Germany to serve the European market. The collector has some machines that are marked in European currencies instead of dollars.

The cash registers are mechanical, not electric, and Heath has even acquired a small servicing kit with tools and oils to keep them operating.

Once a mainstay of retail businesses throughout the country, the ornate cash registers were eventually phased out for more modern equipment. They became somewhat rare as they were being replaced. During World War II truckloads were melted down to support the war effort. The brass was used for shell and bullet casings, Heath pointed out.

Even though his collection contains more than 30 machines today, the collector keeps his eye out for the unusual, or one that he does not have.