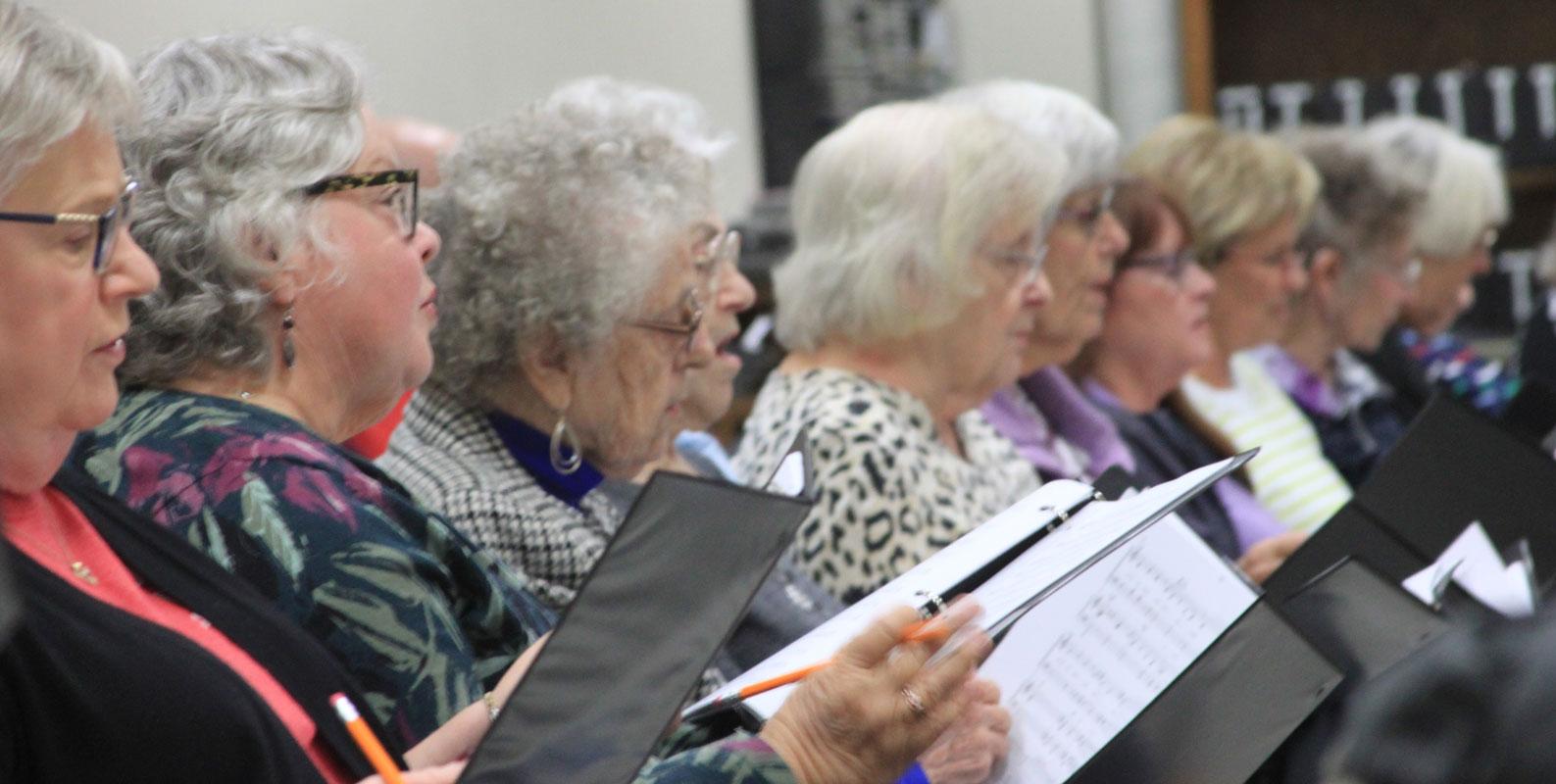 It’s evident that Allen Stroud and his flock of singing seniors have a good thing going.

For 25 years, the Pastor of Music at First Baptist Church in Wylie has been orchestrating and conducting practices, concerts and trips for the Silver Chords Choir.

“The funny thing is the reason we got started was the Baptist General Convention of Texas was trying to recruit senior adult choirs to go to South Texas and sing for winter Texans,” Allen said. “Then we would encourage them to get involved with local churches.”

The group started with only eight people in the beginning, but Allen said it grew pretty quickly once people decided that it would be something fun thing to do.

In the early years, Silver Chords traveled to the Harlingen area in late January/early February and performed about 5-6 musicals for senior adults at RV parks, nursing homes and churches. The musicals also included drama sketches, said Allen, but for some reason they (music companies) stopped producing them for senior adults.

“We had actors, props, the whole bit,” he said.

Props are no longer needed, which makes the trip a bit less intensive, says Allen, but they still take sound equipment, keyboards, etc. so they are prepared in the event the facility they are singing in does not have the equipment.

They have a narrator and the group performs a medley of songs written specifically for senior adults. Members no longer have to hold and
memorize music; instead they have a prompter which the narrator’s wife operates.

“It always looks better when you’re not having to hold music,” Allen said.

Wylie resident Wanda Graem is the only original member of Silver Chords. “Everyone either died or moved on,” she quipped.

Graem was in her 50s and working at a local bank when her husband died in 1993. Allen reached out and asked her if she would go along on the Silver Chords trip to take care of the music.

“I had always been active in church anyway – this gave me something to do,” she said.

Graem was the keeper of the music for two years before she joined the choir.

Twenty-five years later, her second husband of 23 years is involved as well.

“We really look forward to the trip,” she said. “The fellowship is always so good.”

Brother Al Draper, the former Senior Pastor of First Baptist Wylie for 50 years, says he was the original bus driver for the group.

Today, the roster of Silver Chords members totals about 60 individuals, most in their 70s and 80s. Performances often include about 40-50 members.

“I really liked Allen, so I thought I’d join this,” she said.

Her husband Tom watched from the sidelines for many years before he joined as well.

“This is his first year,” she said. “He knows all the people – all are church members.”

The group is a mixture of couples and widows, and some members are family. Allen said at one point they had several mothers and daughters in the group.

His own parents, ages 94 and 95, have been members since they moved from Arkansas in 2016 to be near Allen and his brother who lives in Lancaster.

It is, however, a tiny bit obvious that Allen Stroud, Sr. is proud of his son.

“We have thoroughly enjoyed it (Silver Chords) since we moved,” he said. “I’ve been involved in church choirs for a number of years and I think Allen’s is as good or better than any of them.”

As the leader of this senior group, it takes a lot of planning and preparation to get ready for the annual trip and performances. Allen comes up with a new theme each year and members start working on music in September, practicing every Monday from 9 – 11:30 a.m.

“This year it is old Southern gospel songs,” he said. “This musical has seven songs in it.”

The group hosts a dinner theatre at the church prior to the trip to help raise money. The 2020 trip is planned for Jan. 24 through Jan. 27.

They no longer make the trek to Harlingen, opting for Rockport instead. On the trip they’ll perform five or six concerts from Friday to Monday at three different RV parks and a church. Sunday evening, they travel to Schulenburg and perform at a church, then move on to La Grange where they’ll sing at a nursing home before they head back north.

“It’s such a joy to watch the presentation of the Lord through music,” Higa said.

The RV parks all have activity directors, so Allen makes arrangements through them. While cost can be an issue for many seniors, Allen makes it affordable by choosing hotels that serve breakfast and assigning roommates for the single travelers. The church also subsidizes the trip so members can afford it.

Graem said Allen has always been a top-notch leader.

“He has everything organized,” she said. “He tries to keep the price down. He wants everyone to be able to afford to go on the trip.”

Many of the churches and facilities provide food, but it’s clear the group has a few favorite haunts to eat along the way. Allen said one in particular is the Boiling Pot in Rockport.

“All of them go just to watch me eat crawfish,” he said laughing. Draper echoed the sentiment for the place saying, “Anytime the group was there we were having fun.”

Allen is known for his patience and sense of humor with the seniors.

Silver Chords member Imogene “Gene” Bush laughed saying, “Even when you make a huge mistake (like forgetting to turn your phone off in the middle of the concert) he can make it funny, and in a way that you never forget and won’t do it again. You hate it, but he makes it not a disaster.”

After the January 2020 trip, Silver Chords doesn’t stop practicing, though just not as often.

“I don’t want to wear them out,” Allen commented.

“The great result of starting the choir is that it gives these folks something to do,” Allen said. “I think one of the reasons why my parents have lived as long as they have is because they have stayed active.”

For anyone interested in joining Silver Chords, there is no age restriction although they are known as the senior adult choir for First Baptist Wylie members.

Allen’s wife of 44 years, Sandy, retired last year after 20 years as the pre-K minister at FBW. Although she has never been on a Silver Chords trip with him, the window of opportunity may present itself, says Allen, if she can manage to get away from their six grandchildren.

Music has always been Allen’s passion and his dad said, “He pretty well had his mind made up before he went into high school.”

Allen was hired in October 1980 as the pastor of Music and Youth by Draper. Over the years his role in the church changed to Music and Education, then Music and Senior Adult Ministry.

In his new role as Senior Associate Pastor, Allen still leads the 8 a.m. traditional service, plus he handles a lot of pastoral care and senior adults.

He’s leading a group of seniors on a trip to Israel in February 2020.

Allen’s role as the leader of seniors doesn’t stop there. He’s been in charge of a group called Happy Circle for the last 26 years.

Draper said the church formed the group 47 years ago with just a handful of people as a way to give Wylie seniors, not just those that attended First Baptist, something to do. In the beginning, it was simply a potluck luncheon. It has since grown to over 300 people and now a luncheon is served by FBW Food Groups the first Monday of the month in the Event Center from 11 to 12:30 p.m. The luncheon is free and always includes some form of entertainment arranged by Allen. Any senior adult, 65 and over, can join.

“I think Allen has been the force behind the success of that program,” Allen Sr. said. “They always have great programs and are key to the ministry of the church.”

Founders Plaza in Wylie sends 15-16 people to Happy Circle and a couple of buses come from the Wylie Senior Center as well.

Her mother was one of the charter members of Happy Circle who started attending in her mid-90s and at one point, mother and daughter were members.

Higa says all Silver Chords members are also in Happy Circle. She has been involved for seven years and says, “they’re a great group of people.”

There’s no shortage of stories related to the Happy Circle trips that Allen plans each year.

“It’s just a fun group and we’ve had a lot of good stories over the years,” Allen said.

Last month, two busloads carrying 97 seniors left for a trip to Branson, Mo. Multiple shows and restaurant stops were on the itinerary.

There’s no doubt the Happy Circle group, along with its fearless leader, shared more laughs and stories.