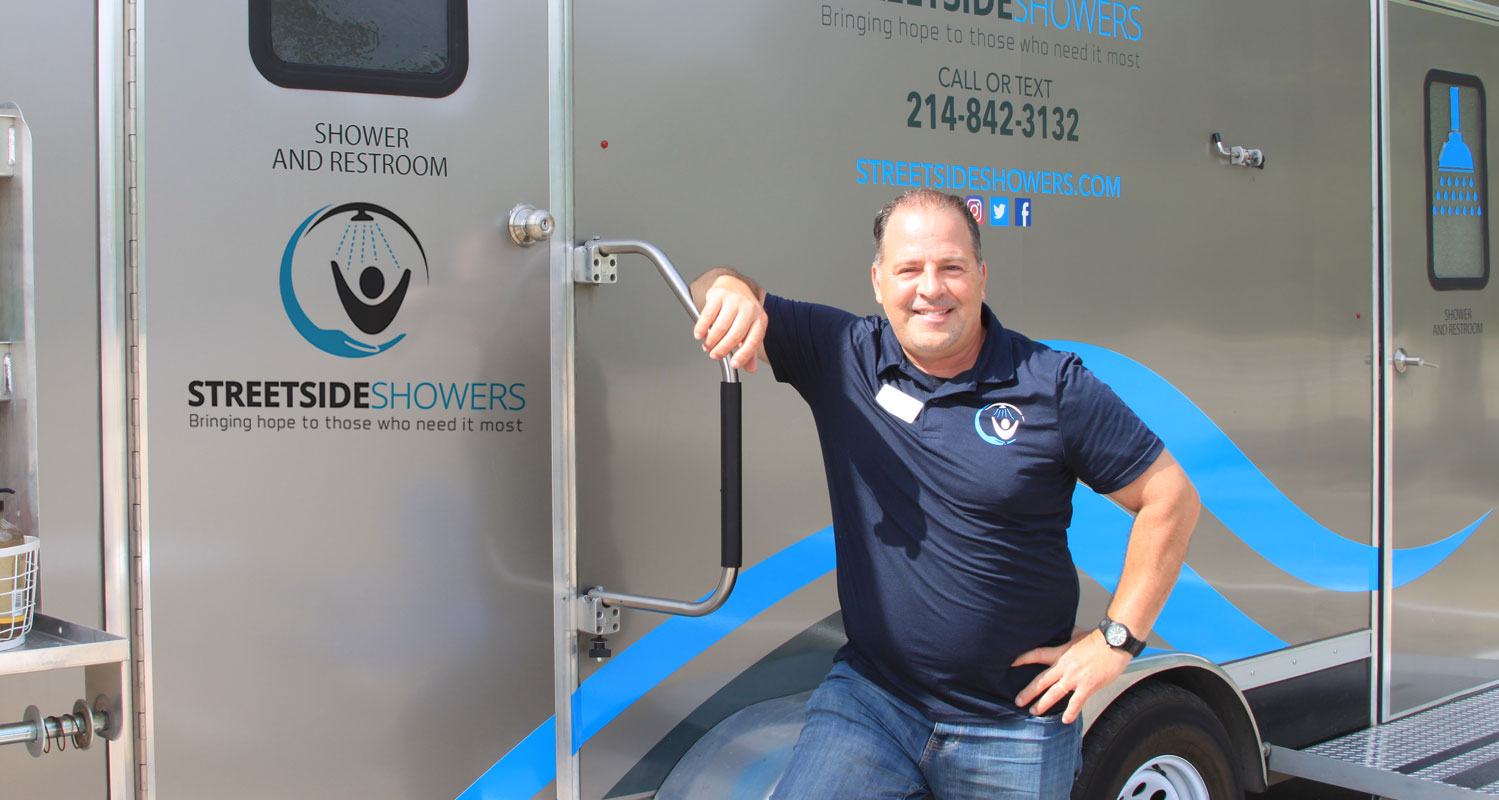 Bringing hope to those who need it most

In the morning, in the evening, or post workout, who doesn’t love a good, hot shower? Water running down your face, lathering up with your favorite soap and shampoo before wrapping yourself in a clean, fluffy towel all in the privacy of your own home. Now imagine you’re homeless and trying to clean up and get ready for work every day in a gas station bathroom. Faucets won’t stay on as you’re trying to wash your face, hair, or any other body part, before attempting to dry off with paper towels or an air dryer.

This scenario is happening to men and women experiencing homelessness every day in the Metroplex.

It’s that vision that prompted McKinney resident Lance Olinski to take notice and take action after witnessing a man doing this simple daily routine we all take for granted in a restroom one day.

“Homelessness is growing,” said Olinski. “Fifty-four percent of the people coming for showers have jobs. So, one of the problems we ran into is people trying to stay clean.”

With a heart for helping others and solving problems, this father of five children looked for a solution.

The answer was simply one click away on the internet where he found Lava Mae, a nonprofit providing shower services. The company, located in San Francisco, had been cleaning up clients since 2013.

After contacting Lava Mae, Olinski flew to California for four days to help and learn by serving.

“I tell people I really didn’t invent the wheel I just brought the wheel to Texas,” he said.

After his trip, Olinski raised enough money to buy two shower trailers. He purchased only one to start, a two-stall trailer for $25,000 in 2017.

The trailers are built by RV companies and require about a 2-3 month lead time to build. “They are actually very popular,” he said. “Construction companies often use them on job sites. I’m just the only one who decided to take it on community service.”

Olinski resigned from his job as an assistant pastor and returned to his other vocation, accounting, to finance his family’s modest lifestyle so he could start serving the community in June 2017. He soon realized he was not going to be able to accomplish all he wanted to by just offering shower services on Saturdays in McKinney so he pursued Streetside Showers full-time.

Early on, Olinski was trying to determine what exactly was needed. The two-stall trailer worked for some of the smaller locations, he said, but once the homeless community heard about it, the locations started to grow. Nonetheless, they provided 1,000 showers to guests that first year.

“Before we really started Streetside it would be two, three, or four weeks before they would get a shower,” he said. “Some were showering in canals, sinks, streams and rest areas.”

In response to the growing demand, Olinski rolled out his new three-stall mobile shower unit the nonprofit purchased for $45,000 in March 2018. The new trailer has one shower that is handicap accessible.

Image is very important to Olinski. The trailers are sleek and shiny with a professionally designed logo. Each shower unit is private and includes a white stall shower, sink and mirror, and a porcelain toilet.

Although still in its infancy, Streetside Showers has evolved and now serves multiple communities. Olinski refers to his service as being kind of like a bus stop. “One of the things we worked hard to do once we established a good location or partnership, is to be there rain or shine every week so they can count on us,” he said.

Every Wednesday from 2-5 p.m. Olinski and his team are in downtown Plano at the Collin County Assistance Center. “They (CCAC) provide a lot of services, so I just come alongside them,” he said. One of the things needed at each stop is a water source and electricity. The unit has a tankless water heater that he sets to 125 degrees so hot water is available all day long.

Aside from Plano, where they serve about 25 people each week, there are three other stops in the Metroplex. Thursdays they travel to downtown Irving, Fridays they are in Denton, and Saturdays are reserved for McKinney, which is temporarily shut down due to a need for a new location. Olinski leaves Mondays and Tuesdays open to do operations and fundraising. Thirty-eight hours of his week is spent providing shower service so “free” time is limited.

Denton has the largest demand and usually serves around 35 guests each week though last week Olinski said he had 39 people show up. Streetside Showers can only serve 40 guests in a 3-hour timeframe.

With only three showers in the trailer, Olinski wants people to wait in line so he can talk to guests and develop a relationship so he can better serve them. “A lot of things happen organically,” he said. “There’s no pressure.”

Guests are served on a first come, first served basis. Olinski trains volunteers, called shower valets, to help with line management and cleaning the showers. Every guest is given a towel, washcloth, bar of soap, shampoo, four pairs of socks, brand new underwear and hygiene supplies for later on in the week when they are trying to wash and stay clean. Last year he gave away 5,000 hygiene kits.

“I’m very conscious of the business,” Olinski says. “When they come out of the shower they don’t look homeless anymore.”

Shower times are 16 minutes for men, 21 minutes for women. “We’re not trying to wash people as quick as we can,” he said. “This is the dignity piece we are trying to restore. We found most men take a 10 -12 minute shower. When you enjoy a hot shower, you just feel better.”

After each shower, volunteers do a quick clean using a hospital grade disinfectant called Vital Oxide which is better for the environment and health than bleach. “It’s hydrogen peroxide based and kills bacteria but it’s expensive,” he said. Twice a month, Olinski cleans each shower with an industrial steamer for a deep clean.

“A lot of our guests really notice how clean it is,” he said. “We really try to provide a very safe inviting environment.”

Volunteers are essential to Streetside Showers. Olinski gets volunteers in each community and trains people every week. “You really can’t do anything wrong,” he said. “Streetside is just a tool to give people an opportunity to serve.”

As a result of Streetside Showers’ collaboration with Lava Mae early on, the nonprofits have partnered with Unilever for a product called Right to Shower. The brand giant has developed a new line of ethically made, head-to-toe cleansers that will be carried nationwide by Whole Foods. One hundred percent of their 2019 profits will be donated to mobile shower organizations. It’s a great partnership, said Olinski. ‘Love makes the world go round’ but money pays the gas,” he said.

Streetside Showers is looking for organizations or partnerships to do sock drives. They need 10,000 pair of socks per year for their hygiene kits. Other needed items include travel size soaps, shampoos, women’s underwear, feminine protection items and more. All hygiene kit supplies and opportunities are listed on the website at streetsideshowers.com. One item Olinski prefers to raise money for is men’s underwear, he said, because he has a connection with Hanes Corporation which enables him to purchase men’s boxers for just $1 per pair.

With the 3-stall trailer in use 3-4 days a week, and no hired help, the 2-stall trailer has been sitting idle says Olinski. “I have two trucks, two trailers and one Lance,” he says laughing. Coincidentally, he has a friend that has been serving the homeless in Florida where Olinski lived prior to moving to Texas over a decade ago. After discussing at length, Olinski decided to send the trailer to Florida and his friend will put it to use as Streetside Showers of Brevard County.

There is a lot of need for the services like Streetside Showers provides and Olinski has been contacted by many individuals with questions about how it works and how to get started much like he did with Lava Mae. He is currently coaching six or seven people who are trying to start mobile showers in other states. “We call them replicators,” he said. “I’m not trying to franchise.”

Monetary donations are a necessity for Olinski to continue his outreach in communities serving the homeless. Funds help pay for full liability and maintenance on the trucks and trailers, supplies, gas and a small income. Ultimately, Olinski would love to grow staff so he can focus on additional needs, and as the only nonprofit providing shower services in the area, he frequently gets requests to serve other communities. “The hard part is I can’t be everywhere,” he said. “My commitment is serving homeless. I call it staying in my lane.”