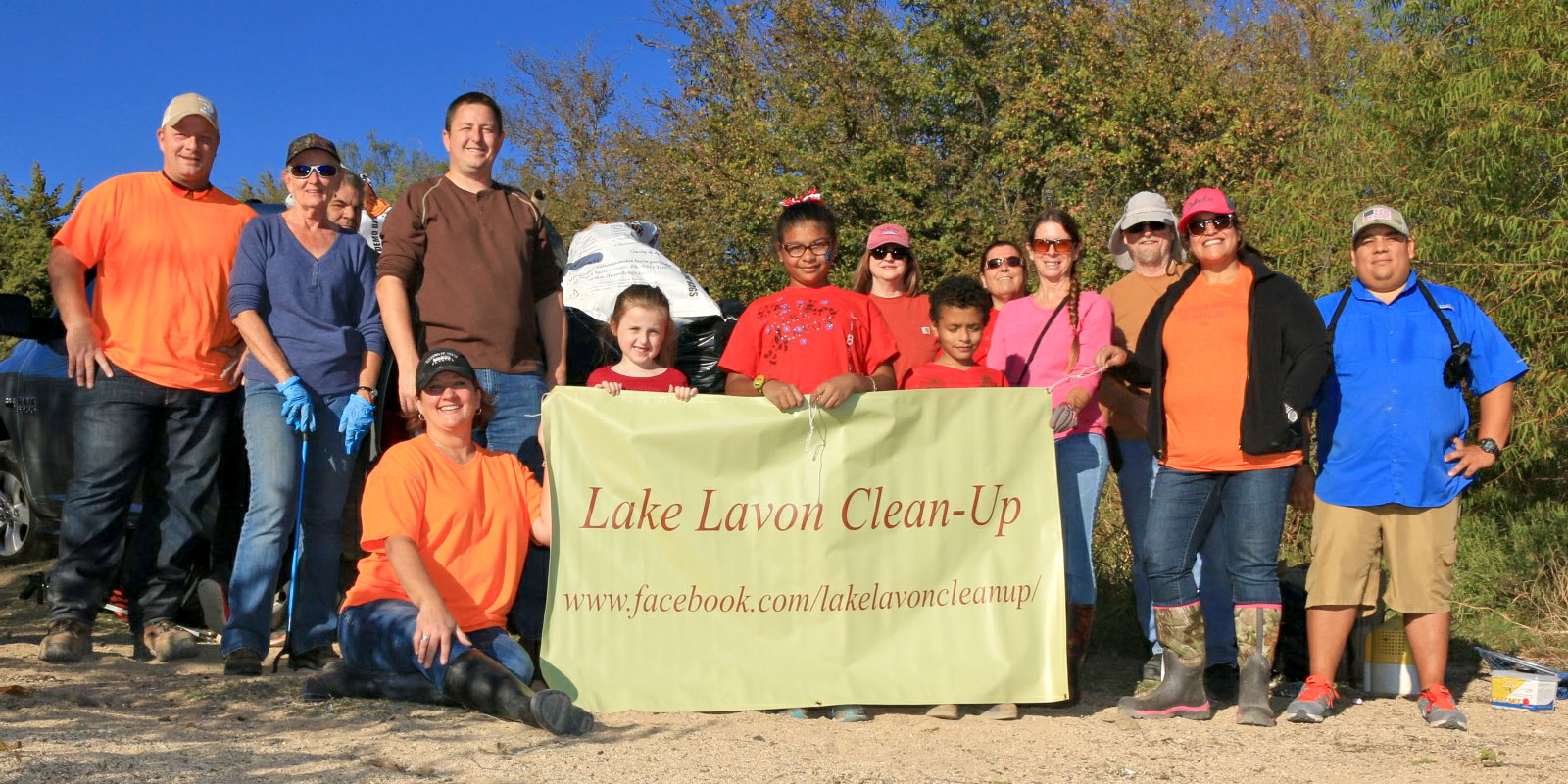 Local group tackles trash, and much more, at the lake

A passion for fishing turned a local man into an activist last year when trash, not fish, caught his eye. David Grote, an avid fisherman and freelance photographer, used to find secret, clean fishing spots around Lake Lavon to spend his recreation time.

During his senior year at Texas A&M University-Commerce, where he earned a bachelor’s degree in photography in 2013, he completed a project in which he shot pictures of Lake Lavon, showing the beauty and trash.

Those images remained clear especially after Grote moved back to the area from West Texas in June 2017. Still toting a fishing pole and a camera, he quickly became frustrated with the mess around his favorite fishing spots.

Grote knew if he didn’t start something the trash problem wouldn’t improve.

“We, as a community around Lake Lavon, have had it with the litter left by disrespectful people,” he wrote in an email last July.

He created a Facebook group called Lake Lavon Clean-Up that same month to help promote and preserve the lake. The intention was to stage community meetups to mobilize volunteers to pick up trash along shorelines, parks and in picnic/camping areas around Lake Lavon.

The first organized cleanup effort was at Tickey Creek Park campground near Princeton. A half dozen volunteers filled eight trash bags in about half an hour. The volunteers picked up only trash that could be bagged, but there were bulkier items such as couches, tires, roofing materials  and fence pickets that had been dumped around the lake. “It is unbelievable the things that people do,” Grote said. “Somebody actually hung a beer bottle in a tree.”

Grote reached out to the Army Corps of Engineers and anyone else he could think of to assist with picking up the larger items. He eventually connected with Michael Kinard, Lake Lavon Manager of the Army Corps of Engineers. Kinard explained they had unexpectedly lost their trash service provider at the parks and it took them a bit to get the new contract in place. He pledged to partner with the group as much as possible.

A second group cleanup followed one week later at the same park with double the amount of volunteers. “It took off like wildfire,” Grote declared.

Since last summer the group has garnered support and grown to an impressive force of community volunteers – all passionate about the same things – the lake, water quality, and wildlife. The Facebook page, Lake Lavon Cleanup, now has 650 followers.

In November 2017 the group was alerted to an illegal dumpsite in Princeton behind the Dollar General store on FM 982 off an inlet of the lake. “I went out there to evaluate it for a possible cleanup location and there was actually a ranger there. He told me that a special investigator was assigned to sift through the garbage and look for clues as to who dumped it,” Grote reported.

The project was a bit overwhelming considering the volume of trash – and large items. Grote said, “That cleanup was the largest turnout yet, with almost fifty volunteers joining forces.”

The event was sponsored by Barnes Waste Disposal Services, who reached out to the group and sent a dumpster, a professional driver and a large tractor to assist. They also covered the dump fees. The Army Corps of Engineers pitched in and provided a 30 yard dumpster. Ranger Jonathan Boyce and Fire Marshall Matt Jones rolled up their sleeves and worked alongside the volunteers picking up trash, tires and couches. Lake Lavon Water Sports, Pro Angler Tackle and DFW Pro Angler sponsored the event and donated prizes to give back to the volunteers.

“They have donated fishing poles, pontoon boat rentals and guided fishing trips because they believe in, and support our cause,” Grote said.

The average weight per clean up is approximately 50 pounds or more, however, that does not include bottles, tires, or wood left around the lake. Along with the numerous heavy items, there are many more small items such as cigarette butts, fishing line, and receipts, which weigh little, but are scattered everywhere.

Community support from area leaders has kicked in thanks to social and print media coverage. North Texas Municipal Water District, the Army Corps of Engineers and Watershed Manager Galen Roberts have pledged their support to the group. North Texas Municipal Water District Director Tom Kula recognized the group’s efforts at the December board meeting.

“The Corps has agreed to look at putting bilingual signage about littering and dumping. They have also placed hidden game cameras in common dumping spots to capture the license plates of illegal dumpers,” Grote said. “Barnes Waste Disposal is now a partner, assisting in any way we need. They’ve provided dumpsters, tractors and manpower.”

Grote relocated to Galveston for work in March but he made sure the group would continue its cleanup efforts in his absence. Lavon resident Jimmie Abrogast, a lab technician at the University of North Texas, is now spearheading the cleanup efforts.  “Jimmie was heavily involved while I was there, and used his education in environmental science to test water quality and recruited his college students to assist our efforts and gain experience,” Grote said. “Keri Young Foreman and Robert Puente continue to help with planning and coordination and have been there from day one.”

Collecting volunteers more than once a month proved to be a challenge so cleanups are now on the third Sunday of every month to keep things simple. Anyone can help at the cleanups said the group. Any age, location, or financial status.

“We’d love to see more volunteers, and it’s important to note that some people are reluctant to come out because they could or would only be there for 30 minutes per clean up and that’s not worth it,” Arbogast said. “This couldn’t be farther from the truth! Any amount of time and effort is appreciated and makes a positive impact.”

Advocating tirelessly for cleaner parks, camping spots and areas around the lake has worked and Grote is proud of the group’s accomplishments.

“Looking back to when it was just four of us (Grote, Arbogast, Foreman and Puente) out there at the lake trying to make a difference, look how far we’ve come. We now have a lot of people on our side, helping us, planning with us and enabling us,” he said. “We have sponsors reaching out to us asking how they can help us. I just want to thank each and every one of you, and God, for helping us get here. I’m super excited about what the future holds.”